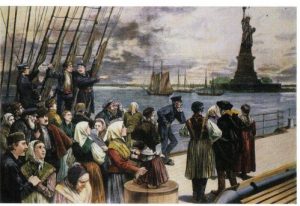 Look, I don’t readily gush about New York City. It’s crowded, noisy, and abrasive. I lived in Greenwich Village over 20 years ago, and I’ve been back in this sphere now for almost 14 years. I’ve stood in long lines for a morning bagel (back before I was gluten-free); I know my schmears; I’ve gotten stuck in the Lincoln Tunnel; I sneezed while driving across the George Washington Bridge and hit the car in front of me; I got broadsided by a dump truck on Second Avenue; I’ve had afternoon tea at the Waldorf Astoria where I rode the elevator with Leah Rabin five years before she died; I got to see Top of the Rock for free because I knew people. I’ve done almost all of New York except see Hamilton because, like most of America, I can’t afford to see Hamilton. Oh, and I eat my pizza folded (is there any other way???).

Now that we’ve established my NYC street cred, let me get back to gushing about 97 Orchard Street, the visionary magnificence of museum founders Ruth Abram and Anita Jacobson (and that is not hyperbole), and the brilliance of how the Tenement Museum executes this vision.

As expected, visitors are taken through the apartments of families who lived in this complex, which was built in 1863 and closed in 1935 before being rediscovered in 1988. Some of the 325-square-foot apartments are restored in the styles of the time, and you’re walked through a single family’s experience of living there, where they worked, how they ate, and even work-life balance, which wasn’t a term in the late 19th century, but still a problem because so many people, children included, were overworked.

Here’s what’s glorious about what Abram and Jacobson did: they left some of the apartments untouched, as they found them: abandoned, peeling, with handwritten notes scribbled in pencil on the walls. Some of these notes are inventories listing numbers of jackets or dresses since this part of New York was central to the garment trade, sewing the clothes for most American women in the late 19th and early 20th centuries. We see what Abram and Jacobson saw in 1988, which was how the interior of the building was last seen by those who lived there before being kicked out in 1935. They were smart enough to leave things alone, recognizing the impact of decay, how time is really layers. The design of the museum is a restored time capsule interspersed with the real time capsule.

Our guide explained that the walls contain 40 layers of paint and 21 different types of wallpaper, one over the other, each wave of immigrants and families leaving their mark. There are also different layers of flooring cracked and peeling, revealing the tastes of the previous occupants: big, floral patterns, bright turquoises and reds, the working class so eager to mimic the decor uptown. The chipped walls are like the rings of a giant Sequoia tree, each layer an era, a story, a family’s place in history. They won’t let you touch the peeling walls, and I understand why, but I very much wanted to.

Seven thousand people lived at 97 Orchard Street between 1863 and 1935. We took the “Hard Times” tour featuring a German family in the 1870s headed by a single mother who somehow got all three of her daughters educated. Our other tour, “Sweat Shops,” focused on a Lithuanian Jewish family who followed the Sabbath despite pressures to work Saturdays. The father was a tailor, just about everyone in the family worked, and over the years, they managed to save up enough to move to Brooklyn, considered the Promised Land back then with its newer construction and green parks before hipsters and artisanal pickle factories took over.

The Tenement Museum couldn’t be more relevant than it is now. The Deferred Action for Childhood Arrivals was just getting off the ground when Trump’s white supremacy decided otherwise. His hatred and myopia leave hundreds of thousands terrified about their futures, many of them non-white. Trump’s action was a move to decide who gets to be an American, a question posed by our guide. Sadly, this question isn’t new in the United States. Prior to the Civil War, anyone could show up and try to earn a living, and then over the generations, the U.S. government’s attitude towards immigration fluctuated, sometimes open arms, sometimes a door in the face. The federal government officially took an active role in managing immigration beginning in 1891, just in time for the “Great Wave” of 24 million immigrants who arrived between 1900 and 1920, thousands upon thousands of them landing on Ellis Island, a pipeline to lower Manhattan, a pipeline to 97 Orchard Street.

What you see at the Tenement Museum is how immigrants have been the backbone of this country for decade after decade, generation after generation. Who would we be without them? Who would I have been if Anna Woznicka got cold feet about leaving Poland all those years ago when 97 Orchard was hopping? My memories of my great-grandmother are limited, but vivid: a 1950s kitchen with a Formica table and counter tops; above the booth-like seating around the table, a photo of John F. Kennedy, America’s first Catholic president who had been long dead by the time I was hanging out in Great-Grandma’s kitchen. Next to JFK was a photo of a very youthful Pope John Paul II, the Vatican’s first Polish Pope, who was at his peak then. These two faces were the first faces you always saw upon entering my great-grandmother’s house.

Before our visits, in the car ride over (a blue Oldsmobile station wagon) my mother would always tell us not to eat anything that was offered, concerned we would be getting expired treats, which was highly likely. I don’t know when Anna Woznicka left Poland, but I know she spoke little English. I know she was born in July 1894, sometime arrived to New York before 1915 when my grandfather was born, gave birth to four children in America, lived most of her adult life in Syracuse, New York, and by the time I was old enough to remember her from visits during the 1970s and early 1980s, she was a raisined old lady wearing pastel housecoats that looked like tablecloths. She would shuffle about the house crying and mumbling in Polish. No one ever explained why she cried during our visits. Sometimes she and my grandfather would bicker in what I could only guess was Polish because it certainly wasn’t English, and I was working hard at a young age to try to pick up words where I could. She would disappear into her bedroom down the hall and return with $5 bills, one for me and one for my younger brother. Once, I received a Christmas card in Polish and had no idea how to read it. She died in 1988. I was 15, my parents were newly divorced, and I wasn’t at the funeral. I have no clue what happened to the Christmas card written in Polish.

But Anna Woznicka got to stay, and by 1973 when I was born, there wasn’t any question that I, a third-generation American, a blonde, green-eyed girl with a Polish name who couldn’t pronounce a word of Polish, would get to stay.

So go to the Tenement Museum, and definitely book more than one tour. Look at the peeling paint on the walls. Listen to the stairs creak beneath your feet. Think about the smells that were outside those windows in 1863 or 1901 or 1915—plenty of horse shit and garbage and beer because the neighborhood was predominantly German at the end of the 19th century with countless saloons. Think of who you are and where your family comes from. Think about your neighbors; mine are mostly Korean who speak Korean—one little girl two doors down recently learned English. Think about who became American and why, and then think how America could still be America yet turn people away.