Zigzagging over Vermont this week brought to mind this very meditative William Carlos Williams’ poem titled “The Red Wheelbarrow,” which was first published in 1923:

so much depends
upon

beside the white
chickens.

In February, actually—I’m guessing throughout much of the winter—the Green Mountain state is a study in red and white, red barns dotting snow-covered fields so white and smooth and completely unblemished they look lakes reflecting the sky. A few times we would look at a field and ask aloud “Is that a pond or a field?” because there were places where the two appeared identical and we couldn’t tell what lay beneath all that alabaster snow. There are several weeks, actually a few months more to go before white chickens and red wheelbarrows will be back outside, but the poem repeated in my mind like a song as we drove scenic Route 100, a north-south road that twists through the center of the state’s forests and farms. 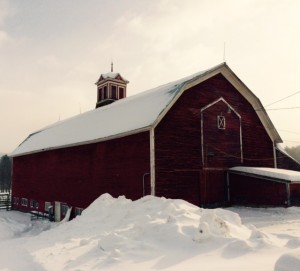 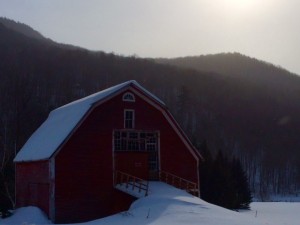 Everyone drives a Subaru Outback in Vermont, but the red barn is the state’s true workhorse, the one that has weathered not just the 20th century, but the latter half of the 19th century as well. No one can convert a Subaru Outback into retail space or houses of worship, but Vermonters have converted old red barns into artists’ studios, ski shops, flower shops, restaurants, welcome centers, event space (with for rent signs out front), and one peach-painted barn served as the town synagogue. I stopped to look at a red barn decorated with weather-beaten Buddhist prayer flags. Some red barns simply stored hay, housed cows and served as a place to keep tractors until grass grew again. I learned about this beautiful, five-story barn that’s part of the Farmhouse Inn in Woodstock, Vermont. Built in 1915, this barn protects about 40 dairy cows from harsh winter weather. I wanted to go inside, but we were just passing through on our way to meet a friend for lunch in Brattleboro. 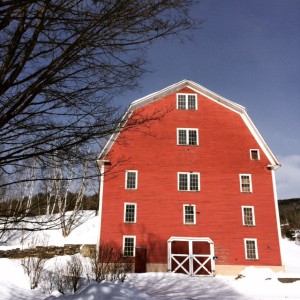 I drove by some gorgeous red barns that I wanted to stop and photograph, but there were no where safe places to pull over. Plowing had created four-foot high snow banks alongside the road, so I reluctantly passed up some gorgeous, iconic red barns, some still with Christmas decor clinging to giant front doors. At our lunch in Brattleboro, our friend told us about his brother’s annual fall festival barn party and I invited myself simply to go spend an October weekend partying in someone’s barn—because partying inside a historic barn probably feels a lot different than sipping cocktails on some midtown skyscraper rooftop. I grew up surrounded by barns and sometimes miss them living in suburban New York City. Red barns exude endurance and hospitality. There’s something very reassuring in seeing these barns stand strong against windy white winters; someone has taken great care of the land that nourishes the animals and people residing there, that inside the barn it is warm and safe and welcoming, that the snow will always melt and that spring will always return. 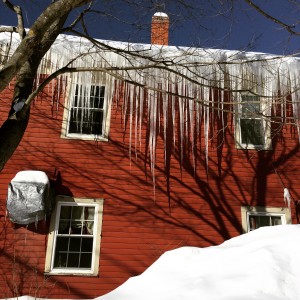 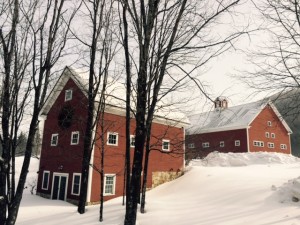