This has never happened before, but we booked a flight and then cancelled it. Last summer, when we had been living in our new house for all of two weeks, we learned that Turkish Airlines had some affordable fares so we booked a trip to Istanbul figuring we’d sort out what we wanted to see later. Then we started to encounter problems finding a hotel we could afford. Maybe that’s because we would have been traveling the week leading up to Easter. We also realized we didn’t want to schlep all the way to Turkey and not see Ephesus, which would add another $1,500 to an already $6,000 trip (hotel and airfare), and we’re not even talking about eating and seeing anything cool. Long story short, the Turkey trip was adding up to cost way more than we wanted to pay, especially given we just bought a new boiler to heat the house and we’re going to begin renovating a bathroom soon. Houses eat money. I know that now. And there are disadvantages to booking too early. I know that now, too. Moreover, I had assumed that finding inexpensive flights would lead to a relatively inexpensive trip, but that didn’t prove to be the case. We got a partial refund for our tickets, about 45 percent of the full price. And then we booked an all-inclusive to: 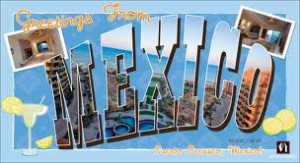 Even with the loss we took cancelling the flights, the cost of an all-inclusive in Cancun still ended up being cheaper than anything we could’ve come up with in Turkey. Yes, I suppose we could’ve made do, flown over there and rolled the dice with hotels and location, but I wasn’t in a dice-rolling mood. I want to experience Turkey and not be shoe-horned into anything. I’m done with the whole backpacking through Europe, staying in hostels, extreme-budget approach to travel. I work way too hard for that. I’ll go cheap, but I still have some standards.

Mike and I have actually been to Cancun once before–we spent a night at the Hyatt Regency on our way back from Cuba. And I think the Hyatt Regency isn’t too far from where will be this year. Eight years later, we’re going to Cancun for spring break and we’re going to swim with some dolphins, which sounds like paradise given there is two feet of snow outside. It’s been a brutal Northeastern winter. Anna’s snowman–built on New Year’s Day–is still standing strong. Maybe we’ll create some friends for him–snow dolphins.