I’ve been married to a lumbersexual all these years and didn’t know it until we were walking around downtown Burlington, Vermont, and I lost count of the bearded, bespectacled, flannel-wearing fellas—some bearing ink, some not—crisscrossing our path. Mike was thrilled to know a look he’s been rocking for over two decades has finally become hip. He was home-brewing and coffee-snobbing and being particular about how the bacon was smoked and preferring higher-end flannel and a well-trimmed beard long before whippersnappers made it trendy.

And me? I’m donning my Iceland wool, my hand-knitted scarves, my black boots and feeling at home, too, even though there isn’t a name for whatever it is I am or am doing. I’m just walking around as the proud wife of a lumbersexual.

It’s nice to look around and see your tribe. Since moving to the New Jersey suburbs over 11 years ago, my husband and I have felt like fishes out of water. We live less than 10 miles from midtown Manhattan but it might as well be Antarctica or rural China. New Jersey has a reputation for over-development, bad driving, bad attitudes, killer pizza, and being home to Pharmaceutical Row. All of it is true. At the diner near our old apartment, we ate breakfast with the mob, old guys with Italian-American accents and pinky rings kissing each other on the cheek and talking about contracts. Back in the day, we used to see casting calls for extras in “The Sopranos” . To top it off, Manhattan’s competitive, helicopter versus free-range parenting styles have seeped into our community. No wonder Mike and I are viewed as the neighborhood hipsters; that’s not hard to do in our stuffy ‘burb.

Why rant about New Jersey? Because it explains what lures us to Vermont and why we keep schlepping up here, snow (which is what it is doing now), rain or shine.

A high population density of lumbersexuals aside, what draws us to Vermont is the state’s independent-thinking and commitment to local entrepreneurship. I know that might sound like marketing-speak, but dangnammit, it’s genuine marketing-speak. Where else can someone sew wool pillows, sell them for over a $150 a pop, and become so in-demand that your studio is by appointment only? Where else does someone take old cheese graters or rusty farm equipment from Virginia and make funky light fixtures? Where else are sap buckets reimagined into planters? Everything is reclaimed and repurposed, and it’s not a fringe movement, it’s mainstream business here. 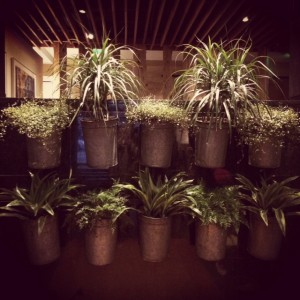 (Sap buckets as planters in the lobby of Hotel Vermont, which features Woolly Mama Fiber Arts pillows throughout the hotel as well as the work of many other local Vermont artisans.)

And that’s just the stuff the Vermonters want you to buy. Switching gears to what they want you to eat, the grassroots philosophy continues. Agribusiness is big business, and although there are fewer than a thousand dairy farms in this state of 626,562 people, its output of artisanal cheeses is exemplary. Every cheese here comes with a story. Everything you eat here is farm-to-fork. Every menu seems to have a listing of local farms so that you can find out where your cow grazed before it was either squeezed or slaughtered. Even our Mexican takeout tonight from El Cortjo featured farm-to-table tacos where you get a listing of who made your cheese, your chicken, your vegetables, your cilantro! Is outsourcing illegal in Vermont or does it come with some steep penalties, either financial or shunning by neighbors? One wonders. 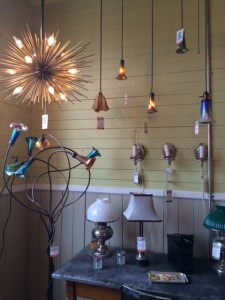 (Conant Metal & Light will take any scrap of anything and turn it into something illuminating and beautiful.)

To go back to New Jersey means greasy calzones, cream cheese for bagels made from who knows where, or, my favorite, “farm fresh” eggs that look and taste like grocery store eggs because the chickens are fed the same cheap bulk feed instead of being able to run loose and scoop up backyard worms or eat table scraps like our chickens did back in Taos, New Mexico (I’ve got a thing about chickens I’ll go into another time). Though running loose in New Jersey, no matter what species you are, comes with its own risks, so maybe Jersey chickens prefer the coop.

We feel at home here in Vermont (and we were married here) even though our home is about 250 miles south. We don’t abandon it all to raise chickens and sew wool pillows—as nice as that sounds—because although we’re both dreamers, Mike has a sweet corporate gig that honestly, in this economy, you hold on to until someone from HR says otherwise. So we stay. Because it’s good for the long-term. It’s good for our kid. We’ll cash out and join the lumbersexual masses eventually. We know where to find them.