When I was in Key West, I ate constantly, walked constantly, swam every morning, and returned feeling in better shape. When I was in Paris, I ate butter on brie, chocolate on croissants, easily walked five miles a day and came home feeling in better shape. Now I’m home, working, sitting…a lot…eating less and feeling in not so great shape. I much prefer the eat-what-I-want-when-I-want-and-move-constantly lifestyle over the desk jockey, calorie-counting lifestyle, but that’s the industrialized technological world for you–all the action takes place sitting down.

Paris is a fantastic city for walking and eating. Instead of conducting foodie research prior to our long weekend jaunt, I told my husband, who had never been to Paris, that we’ll just walk around and eat what looks good because there’s no such thing as a bad meal in Paris. We enjoyed fondue on Rue Mouffetard, chocolate ice cream under the Eiffel Tower, and brie with red wine just about everywhere else. I almost bought a fondant piggy at a patisserie, but held back to allow for more cheese and wine later in the day. All the stereotypes in Paris appear to be true, even during my third time there. The food’s great, the wine’s great, and half the city population walks around with a baguette sticking out of a bag. In fact, we saw some man who hadn’t seen a shower in days sound asleep on the metro platform waiting area, clutching what looked like a fresh baguette. Parisians clearly love their carbs.

However, the coffee is not great in Paris, which is a surprise given the cafe culture there. I’m not sure why this is since this is a haute cuisine capital and everything else is delicious, but The New York Times reports improvements (sort of) behind the baristas. Our hotel included breakfast and the coffee was sufficient while the rest of the breakfast was wonderful–a basket of croissants every morning, cheese, salami, nutella, yogurt, fresh fruit, granola, and yes, even cornflakes! I highly recommend Grand Hotel Les Gobelins. Mike found this hotel through Expedia. Two blocks from the Latin Quarter, this two-star hotel has everything you need for the quintessential visit to Paris. Charming French street life abounds and buzzes right outside its door. The rooms were clean, simple and had WiFi. There’s a small TV in each room, but if you’re in Paris watching TV, at any hour, then you have a problem. 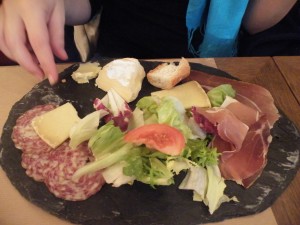 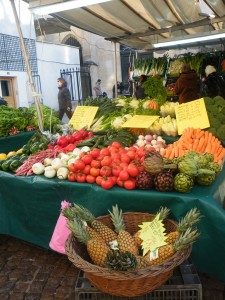 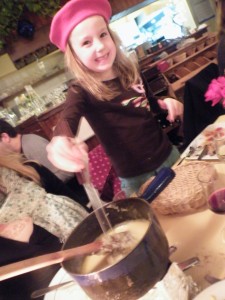 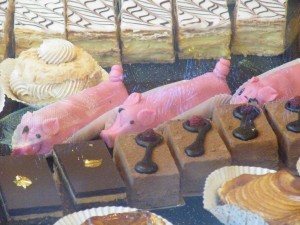 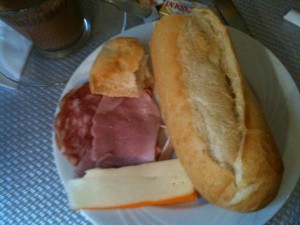 Taking Ratatouille’s advice and listening to the sound of the crust to ensure the bread is fresh. 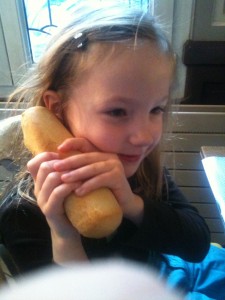