In three weeks, I’ve been on two different antibiotics for two different infections. After avoiding antibiotics for years, believing my green smoothies and regular jogging protected me from almost everything, my summer embracing the outdoors has led to two trips to the doctor’s office and an afternoon cracking jokes in the emergency room. It was a wet June followed by a hot July in the Northeastern United States. Nature got prolific. And then nature found me.

The first infection was a urinary tract infection that I *know* occurred after I went swimming in Saranac Lake. Other people were swimming in Saranac Lake during that super-hot, global-climate-change inferno week in mid-July when temperatures reached the upper 90s. I eased into the water and one of my first thoughts was “I wonder if I’ll get a urinary tract infection” because the lake felt, well, um, alive. Very alive. Mike went swimming with me and immediately remarked on the thriving biodiversity that invisibly circled us like hungry sharks. By then I was neck-deep in water trying to cool off, so I decided not to be a diva about things and paddle about. Two days later symptoms started. A few days after that, I was on Macrobid. Can I *prove* E. Coli in Saranac Lake found my private parts? No, but I’ve swam in many lakes (including Lake George also in the Adirondacks) and didn’t towel off afterward with an infection. This time, as I toweled off, I just knew I had brought something back with me.

Fast forward two weeks, and we’re back up in the Adirondacks yurting at Falls Brook Yurts, which is just lovely and not for sedentary folks because it’s a two-thirds mile hike uphill just to access the yurt. Your only water source is a nearby brook and whatever bottled water you bring with you. Along the hike to the yurt is a giant Adirondacks style chair made of old skis. 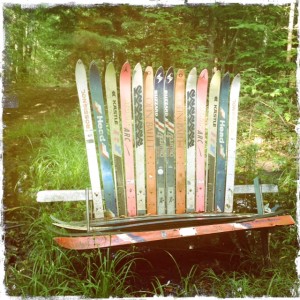 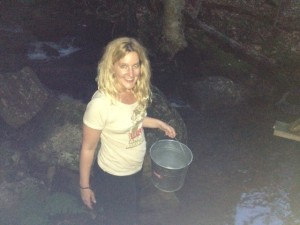 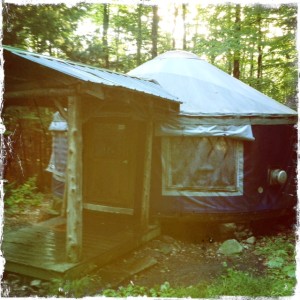 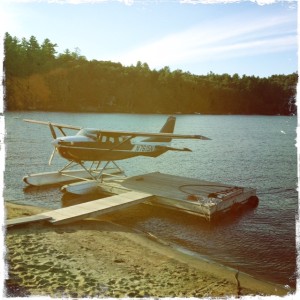 (A church converted into a canoe and ski shop; very Adirondacks) 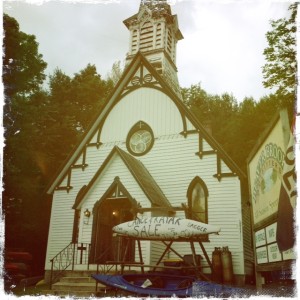 I can’t say we truly camped there because we didn’t prepare any meals there or even build a fire. It poured both nights we slept at the yurt, and the ground was soaked even upon our arrival. The word that kept going through my mind as I looked at all the different fungi sprouting from the ground was “fecundity.” Forests are dark, damp and fertile. Like lakes. Perfect for more wee beasties. Considering my recent urinary tract infection, I “showered” outdoors Saturday morning by standing naked on the yurt porch and pouring two liters of Poland Spring bottled water over my head with 50-degree air to cool me off…quickly. No brook water for me, even if it was boiled. 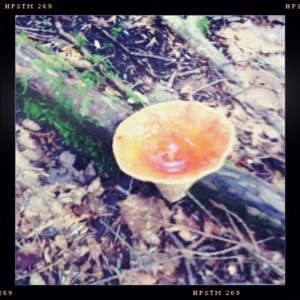 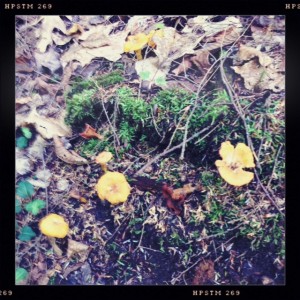 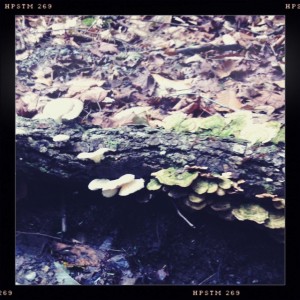 My second infection was just bad luck. I know the rules of the forest and have written enough about Lyme disease to know you enter the forest as if going to a job interview, dress conservatively, fully-covered, and show no skin except face and hands. Instead of perfume wear bug spray. I need to give a shout out to Burts Bees here, for it was quite buggy during our hikes to and from the yurt, yet all that castor oil and peppermint shielded me.

What could be more vulnerable than lying in bed half-awake listening to the forest wake up? Mike was up making coffee, I rolled over in bed, I was wearing long-sleeved everything but my lower back was slightly exposed and I felt a pinch. And then a second pinch. I sat up and saw this large fly on the sheet. Inside the yurt, this critter was the only other living organism with a central nervous system besides me and my husband. It wasn’t buzzing around like a house fly but just lying on the sheet dazed. I swatted it away. If I had to take a guess at what had just happened, I was likely just bitten in bed by a deer fly. And it was barely morning.

We leave the Adirondacks Sunday, drive home, nothing happens Monday, and then yesterday around lunch, my back starts to feel hot, I’m breaking out in hives, and I’ve got two big red welts where I had felt the pinches. I try to diagnose myself via Google but nothing seems to match. I call the doctor’s office and it’s booked solid. My back is getting redder, my skin is getting hotter, and I’m starting to look blotchy and feel a little itchy. Off to the ER I go. The diagnosis? Allergic reaction to an insect bite (that’s a first for me) and cephalexin for cellulitis (say that five times, fast). Oh, and prednisone for swelling and inflammation and Benadryl for itching. Pop all those drugs at night and watch an episode of Game of Thrones. You’re numb and less spooked by all the gore and darkness.

While getting my vitals checked, I said to the ER nurse “I am done with nature!” and she responds “Oh, no, it’s the best thing for you. I’ve had chiggers and all kinds of things. Just get back out there.”

And I probably will, but not until next year. Over the years, I’ve camped on and off. I get pumped up to go native, head out into the wild, something happens, and I retreat to four-star hotels. In 1993, I camped in the Adirondacks and had no problems, so perhaps my false sense of security began then. Mike loves to tell the story of how in May 1999, we went camping in Orick, California. We had invested in all this REI equipment. We were living in Seattle and trying to embrace Pacific Northwest crunchy ways. All of our colleagues camped. Co-workers’ kids were little Lewises and Clarks. People hiked Mount Rainier the way I ran out for groceries. Everyone seemed to have fantastic outdoor survival skills except us. So we went super-rustic and pitched a tent along the California coast, not too far from brown bear territory.

Sand blew into our eyes and noses and I ended up locking myself in Mike’s 1987 Dodge Aries reading The New Yorker magazine while he tried to keep the mood alive by fussing with a cold dinner over a weak campfire. I hated every moment of that weekend. We drove back to Seattle, and that Monday, I sold our brand new REI tent to a co-worker.

Fast forward to October 2002. We’re camping on the opposite side of the United States now, in Shenandoah National Park in the Blue Ridge Mountains of Virginia. The leaves have turned and the colors are truly spectacular. I figured a fall camping trip would mean no summer storms or summer bugs. However, since I had sold our tent, we borrowed from a friend a giant tent that slept eight. It’s too spacious and we froze. As I shivered during the night, I saw a silhouette of two deer on the tent wall. They appeared at ease, nibbling grass. Those are the moments that make camping worth it. I dozed off. A few hours later the sun rose. We packed up and thawed out at a Friendly’s restaurant.

Fast forward to July 2003 and we’re camping at Assateague Island National Seashore in Maryland, another beach camping experience. Wild ponies roam there. And so do hordes of mosquitoes. Our tent blew down during a thunderstorm and we were eaten alive. Mosquitoes kamikazed into my coffee cup. We drove back to Washington, D.C. the following morning and shopped for calamine lotion.

After this past weekend of hauling and boiling water, of wondering what was lurking out in the forest (only to learn it was in my yurt bed waiting to bite me) I empathized with our ancestors’ struggles. Running water, electricity, Lysol wipes and quick access to antibiotics have made us (or me) soft. We still don’t own a tent. I’m not ready. I’m only on day two of cephalexin and am looking forward to next week when I can return to being probiotic instead of antibiotic. I don’t want to hike wearing biohazard suits, but I’m paranoid enough that I might. The outdoors brings out conflicted feelings for me when I write. I love it and hate it the way I love and hate New York City. Travel writing is often broken down into writing about destinations (this beach is so beautiful!), process (are airport full-body scanners safe?), or service (this hotel is rife with bed bugs!). Travel writing can lack nuance. Ma Nature makes travel writing more challenging. Outdoor destinations are beautiful and sometimes dangerous. The process of hiking, hauling, being prepared for beasties big and small isn’t easy, and is really only for the physically fit. And the service? There isn’t any. There’s no camping concierge to answer questions. At most, you might find a wooly, weird guy who can tell you if the bear tracks are fresh, somewhat recent, or nothing to worry about. Or the only service possible is a faint signal on your smartphone, if you’re lucky. I love the Adirondacks and the Great Outdoors, despite its beasties, which lurk everywhere in this world. But I need a reprieve, so while in California these next two weeks, you’ll find me indoors or at very manicured, pesticide-treated places. And that’s ok, too.