To me, and perhaps to other New Yorkers, the Berkshires look like the Catskills; those same soft blue ripples of rock rising and falling to the north. Yet the Berkshires have a very different narrative than the Catskills. Today, the Catskills feature some of the Rust Belt deterioration that dominates so much of upstate New York, peppered with farms, ski resorts, struggling businesses and some of the hippie fervor that took root there decades ago and just kept growing. The Berkshires is more matronly, posh, stately, pastoral and charming like Vermont, more connected to New England with its white spire churches reaching toward the sky.

While the hippies were farming in the Catskills, across the border, the healing arts crowd were setting up camp and eventually gathered enough resources to hang up a shingle and offer yoga classes and workshops on positive energy. This place is called Kripalu and it’s located in the Berkshires in Stockbridge, Massachusetts. The building was once a Jesuit seminary that sat vacant for over a decade, but you’d never know that by the full parking lot, the constant soundtrack of wheeled luggage, the buzz from the cafeteria and the heavy silences coming from the very full yoga and meditation classrooms. 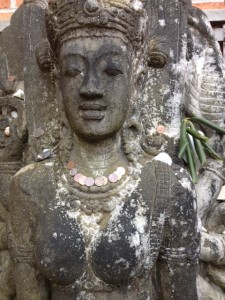 Everyone comes to Kripalu seeking something. There’s a spa, dancing, yoga, meditation, music–almost anything that will help you achieve happiness and calm is offered at Kripalu. Unfortunately for me, this act of seeking kept me indoors the whole time, so I missed out on the beauty that is the Berkshires. This was my first time to the Berkshires and Kripalu, yet what I got over the weekend was just a sampler plate of what’s there. I signed up for a weekend meditation workshop with David Nichtern, who deftly uses humor to teach newbies who can’t sit still how to chill out. On a cold winter weekend, my meditation class was packed. There were men, women, young people, old people, psychologists, entrepreneurs, military wives, empty-nesters, people coping with chronic conditions and people coping with losing loved ones. We all sat on our cushions, eager to let go of what had brought us there. 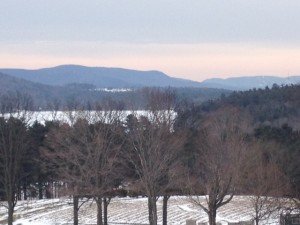 Getaways at Kripalu tend to focus on interiors, *your* interior. It’s not a typical hotel getaway filled with distractions. Amenities at Kripalu are a little different; there may be beds, but this is a nonprofit institution that depends on donations, so while there is spa, this isn’t fancy-pants stuff. Weekend workshops include food, but when you hear the word “cafeteria” you brace for the worst. The exact opposite happened at Kripalu. The food was delicious and inspiring. I ate kitchari every day and looked up recipes on how I could cook it at home. I was a regular at the “Buddha Bar,” which was where the vegans hung out. There was a gluten-free bread basket area. I ate dahl and saag, butternut squash and quinoa, chick peas and kale. The tabletops offered pink Himalayan salt and the beverage counter offered organic white tea. There’s even a silent breakfast–you are required to enjoy breakfast in contemplative silence (I recommend it). Coffee addicts were out of luck; Kripalu’s cafeteria doesn’t serve coffee so the line at the small cafe across from the gift shop was always long in the morning. But I’m fine without coffee. I’d return to Kripalu just to eat.

And that’s what I think of when I think of the Berkshires; a serene winter weekend cocooned in a facility perched on a hilltop, where the views were amazing, the building felt like a mental institution, and the food was worth second helpings. Kripalu’s accommodations are very spartan so if you’re the type of traveler who requires a certain level of comfort and privacy, dorm-style vacationing may not be for you. I’m not even sure it’s for me. Sharing a bathroom with a hallway full of middle-aged women and a few twenty-somethings gave me recurrent flashbacks of college freshman dorm life. I’m fine without a TV in the room, but I prefer a private bathroom instead of the corner sink I had in my dorm-like room. Kripalu does offer more adorned rooms at higher prices, and next time, I might just pay a little extra to not have to remember my room key should I have to run to the bathroom in the middle of the night.

But I also need to go back to see the Berkshires, for all I experienced of the region either came from looking out the window while in meditation class at Kripalu or looking out the window during the drive there and back. I missed out on some fantastic hiking, pastoral New Englandness and town square boutique-y charm. There’s a writing workshop held at Blantyre in the Berkshires I might look into, but that event will likely also keep me indoors writing (and probably doing some yoga and meditation). I believe the Berkshires are more than a pretty view through a window, but it may be a while before I get to find out.