Summer is synonymous with vacation, and when our neck of the woods has those too-close-to-the-sun-Icarus days, I prefer heading to the country or the beach, where it’s cooler, quieter, and less crowded. I’m particularly excited about my trip to Big Sur next month, which we managed to squeeze in between urban jaunts to Los Angeles and San Francisco. More to come on California.

But enough about me, what about you? For those of you in small town USA looking to experience New York City on a budget or for New Yorkers with friends coming in from out of town and are brainstorming ideas on how to enjoy food without having to dress up or leave exorbitant tips for mediocre service, I highly recommend New York City’s food trucks. These roving restaurants are a great way to experience all that’s tasty in the Big Apple without breaking the bank trudging the restaurant circuit. And if you really, really want to go budget and not look like a tourist, enjoy New York City picnic style. You’ll be noshing on your burger and folks will be asking you whether to take the 4, 5 or 6 trains to Lexington Avenue (they all go there). First, the trucks:

As with everything we do in New York City, there are endless options. About three dozen food trucks roam around town and you can get updates on their locations via Twitter. The trucks also convene for the Food Truck Rally at Brooklyn’s Prospect Park every third Sunday of the month at the Grand Army Plaza, which is where I enjoyed a picnic last month and, to date, the best burger I’ve had all year from Frites –n–Meats (I ordered the No. 7 with gruyere cheese—delish!). I’m a green tea -n- green salads kind of gal, so when I sink my incisors into red meat, I like to make it count. I can’t gush enough about Frites –n– Meats and my husband, a carnivore snob, is equally gushy. You can feed a family of four at this truck for about $40-$50, which for New York, isn’t bad, and the quality is superior. Other trucks that convene at Prospect Park include Eddie’s Pizza Truck, Milk Truck, Gorilla Cheese NYC, Rickshaw Dumpling Truck (amazing chicken dumplings!) Wafels & Dinges, which totally took us back to our 2008 trip to Belgium, and Cupcake Crew. A more complete list can be found here. 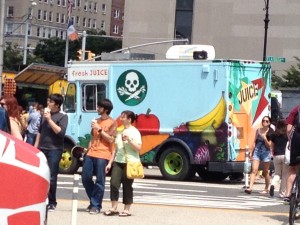 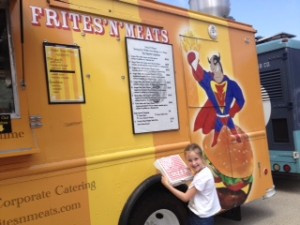 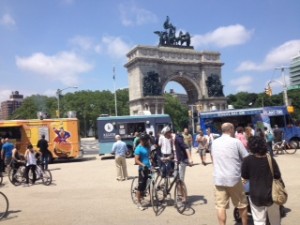 Interestingly, for an island filled with foodies, the food truck scene is relatively new here. I first started following food trucks when visiting Los Angeles, and was a big fan of the Kogi barbecue truck. Nothing says LA like eating a Korean quesadilla on the hood of a middle-aged Prius in Echo Park while watching the sun set behind the palm trees. Good times. The food truck craze continues its eastward journey and apparently is making waves in Paris, a city filled with people insistent on sitting at tables eating their burgers with knives and forks. What’s next? Food trucks vying for space with food stalls in Beijing? Stay tuned.

Ok, let’s say you’ve found a food truck and you don’t want to dine on the dirty hood of a middle-aged Prius, but would prefer to picnic somewhere “New Yorky.” Want to pretend you’re in a Renoir painting? Visit the pond at the southeast corner of Central Park for some lush ambiance. Or you can lay a blanket down overlooking Olmstead’s sculpted boathouse lake and watch the boaters come and go (or go rent a boat if you need to work off that burger or waffle). I did this with some friends back in 1996 and it’s as lovely and postcard picturesque as it sounds. 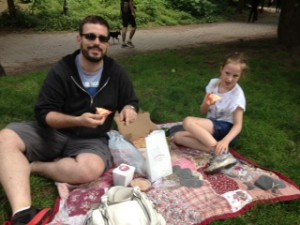 One that I keep driving by, but have yet to check out is the Little Red Lighthouse also known as Fort Washington Park directly below the George Washington Bridge. It has picnic tables and is said to be a family favorite; apparently kids enjoy finding “sea glass” along the Hudson River, which, nine times out ten, isn’t sea glass, but shiny shattered plastic tail lights caused from accidents above (not to be a downer, but that does happen). Nevertheless, the Little Red Lighthouse is a charming patch of quiet tucked in the underside of a very noisy place. If you want real sea glass, I suggest you head to the sea; the New England coast has plenty to offer.

To relive that “When Harry Met Sally” arriving in New York moment, the trucks are often found crisscrossing downtown and the famous Washington Square Park is a great spot for urban picnicking. That means spreading your spread on a bench and not grass (although there are patches of grass if you’re lucky). Washington Square Park is near where I used to live, and it’s a wonderful venue to watch people and dogs (and to listen to how people talk to their dogs—oy vey!). Admiring the marble Washington Arch, inspired by the revered Arc de Triomphe, never gets old, and if you’re still hungry after your food truck feast, Greenwich Village dishes up enough desserts to satisfy the pickiest sweet tooth.

Finally, picnic on some of the most beautiful handpainted picnic benches around. The tables are actually converted lunchroom cafeteria tables transformed in canvases decorated by middle school students from 10 public city schools through an arts program called LeAp NYC. Unveiled in June, the tables have been installed in 10 community parks throughout all five city boroughs, and will remain there through August. The tables are located at Central Park and Augustus Saint-Gaudens Playground in Manhattan; Kaiser Park and Detective Joseph Mayrose Park in Brooklyn; Crotona Park and Claremont Park in the Bronx; Juniper Valley Park and Forest Park in Queens; and Silver Lake Park and Snug Harbor Cultural Center in Staten Island.

See ya in the food truck queue!