After a week in the Galapagos with no luggage, we were pretty sunburned (except for Anna) and ready for more underwear choices. We left Isabela for an overnight in Santa Cruz where we hit the tourist shops and watched iguanas lounging by a hotel pool. The grasshoppers in Santa Cruz are mighty robust-looking and liked to hang out in our hotel hallway. They were harmless, but they would suddenly hop on your shoulder while walking to buy a Galapagos tchotchke. So we were happy to get to Quito, a place where the grasshoppers stayed in the grass.

Tucked in the Andes sits Ecuador’s cultural and historical hub, Quito, and its estimated two million residents. Quito rests 9,300 feet above sea level making it the second-highest capital city in the world. (First place went to La Paz in neighboring Bolivia.) It’s a city in the clouds, so it’s the perfect place to take a break from the equatorial sun.

Quito is vulnerable to earthquakes, yet the centuries-old monasteries, cathedrals, and plazas have held firm and survived time’s storms and quivers. This is a view of Plaza de la Independencia, the city center and its colonial heart. 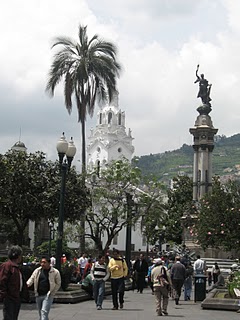 Walking around Quito was a joy–not too hot, not too cold, my sunburn could heal and there were no bugs freaking out Anna or annoying me and Mike. Old Town Quito feels like many European cities, but what was surprising to us was that it was filled with locals. We barely saw any gringos or tourists wandering around looking lost or awestruck–just Ecuadorians going about their business. 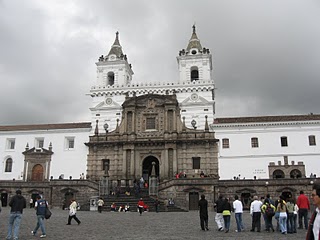 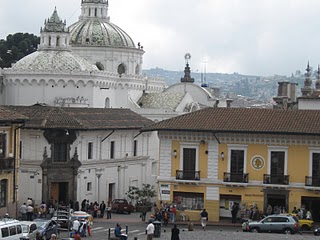 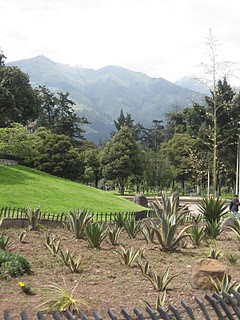 All that walking made us hungry. There were tasty options everywhere, and, as always, places to enjoy cafe con leche to wash it down. 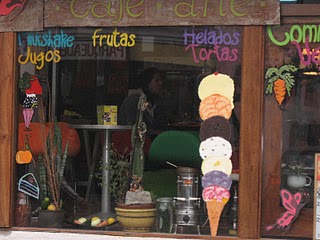 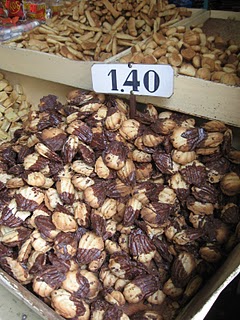 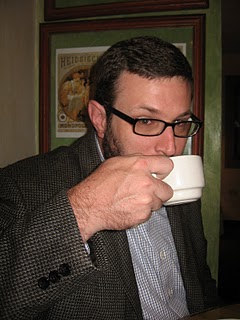 Ecuador is flower country; roses and orchids are two of its biggest major exports. When we arrived in Quito prior to flying out to the Galapagos, we stayed at the Swiss Hotel because we knew that five-star treatment would feel awesome after a long day of cross-hemisphere travel with a three-year-old. The hotel lobby was in full bloom–diaphonous arrangements of long-stemmed roses about three to four feet wide stood on every counter or tabletop. The roses were statuesque. They looked more like sculpted velvet than plants and I had to touch them to be sure they were real. Here’s a door to a flower shop in downtown Quito: 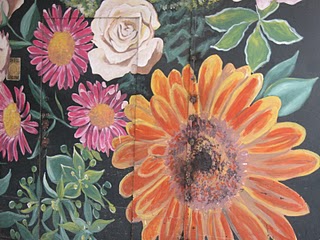 We encountered murals and other forms of art and outdoor sculpture when visiting the Museo de Banco Central, which is a museum, not a bank, although the museum does house an impressive amount of gold. 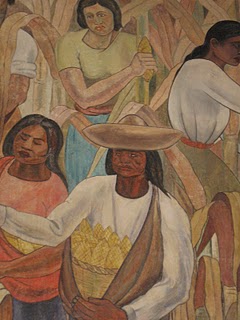 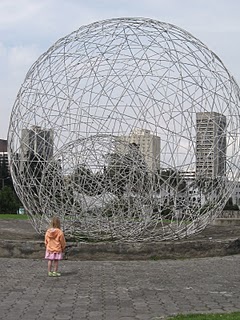 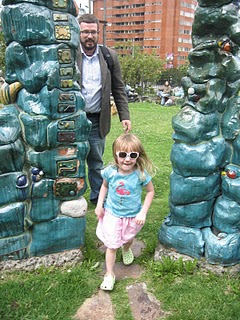 I can’t write about Quito and not mention Hotel Antinea, our hotel where we spent two nights coming back from the Galapagos. The Swiss Hotel was lovely, but it’s your standard business class hotel and served as a 12-hour pitstop from our arrival in South America to our flight to the Galapagos. Hotel Antinea was our opportunity to sit and soak up Quito and Quito-ness. Hotel Antinea is located in Quito’s funky, artsy neighborhood–perhaps the Quito equivalent of Greenwich Village. But the hotel is gated, so you get the convenience of being so close to said funk without the noise. For $65 a night, we got this glorious room plus our own private garden and patio. That’s just crazy!!! 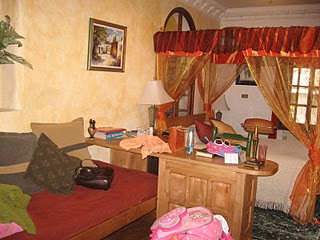 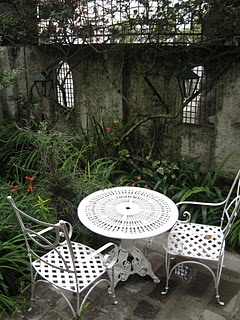 Our kid is a picky eater in Estados Unidos, so I was pretty sure Ecuador would prove no different. We managed to sneak some lentils into her by hiding them under the rice, and occasionally Anna would wolf down a plate of salchipapas (sausage or hot dogs and fries). Those were her culinary limits. By the end of the trip, we were ready to cave. During our walk back from El Museo de Banco Central, we passed a McDonald’s and ordered the classic Happy Meal hoping it would bring happiness. It did. We unpacked our late lunch back at our private patio, and Anna burned off her high-caloric, high trans fat lunch by chasing after a red McDonald’s balloon. That seemed to be a proper way to transition back into American culture. We left South America the following morning, both sad to say goodbye to a wonderful vacation, and also happy to come back home. 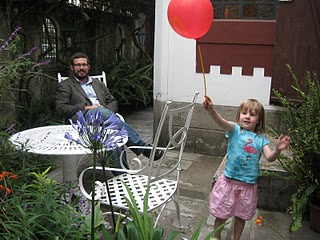 The Martinez-Woznicki family experienced sticker shock when they paid $41 for brunch in Hoboken, New Jersey the day after getting back. Kate and Mike determined that they missed the laid back ambience of South America coupled with its incredibly cheap prices. Kate is already plotting to build a nest egg so large that she, Mike, and Anna can afford to chuck the New York City rat race for a quiet life in Quito spent stopping and smelling the roses and drinking lots of coffee.

One thought on “Dreaming of Quito”