Today’s news from Brussels has me thinking about Antonio, the thirty-something hotel employee at UNA Hotel Naples who seemed to know how to do everything. He didn’t dress like a traditional bellhop, but he carried my bags, figured out the adapter problems I was having after the guy behind the front desk tried a few different adapters with no luck, and—most importantly—he found my passport on the street in front of the hotel entrance. There it was on cold, wet, dirty stone, people walking by it, over it, around it, a critical document carelessly dropped in Naples—the city with all the pickpocket warning signs everywhere. Naples, the city where Americans raise an eyebrow and say “Watch your wallet.”

Brussels’ airport has been bombed, and I’m thinking of Antonio because I’m thinking of the power of one person. Good or bad, there’s more power we wield as individuals than most of us probably know. I’m sure we don’t even feel this power; it would likely overwhelm most of us. I just sat on trains and planes going all over Europe that could’ve been blown up at any time. I can’t imagine what goes through the mind of an individual standing in a crowded wing of an airport who is about to detonate bombs strapped to his body. There were so many little choices made up until that point, fragments of thoughts we will never know about.

I arrived to UNA Hotel Naples after a long train ride that took me from Zürich through the Swiss Alps into the Italian countryside to Milan to Naples. I spent much of the trip sitting next to an adorable Corgi named Liza, the celebrity pooch of Coach 5 that day. The hotel was right across from the train station, which is why I chose it. It stood behind a noisy intersection filled with construction work, traffic, and not enough lighting. It was night time. I dragged two heavy suitcases across very uneven cobblestone, and, since this was Italy, I dodged traffic filled with Formula 1 wannabes. I had to get to the other side of the street and walkways just suddenly ended, like a Shel Silverstein story. It was dark, cold, I was tired and extremely hungry, and my smartphone was going to run out of battery power soon. When I arrived nearly out of breath at the front desk, I reached into my backpack pocket to present my passport. It was gone. The zipper on the pocket was slightly open. I emptied my backpack in front of the bespectacled guy patiently willing to let me sort this out in front of him; dumping my EpiPen, lorazepam, lipsticks, wads of old receipts, dirty tissues, my wallet, my journal, my checkbook. “Dude, here’s my life,” is what my backpack said. I have traveled to 14 countries and have never lost my passport. I blurted out “I think my passport has been stolen!” and I said this with both exasperation and vehemence because it’s much easier to blame a city known for pickpocketing than to admit I was an overtired idiot who may have dropped it on her walk from the train station. That’s right—I did not hesitate for a second to throw Naples under a bus. 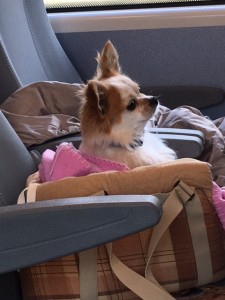 The guy at the front desk called a taxi and wrote down the address to the police station. The taxi was there immediately and we began this rushed, nauseating zigzag through Saturday night traffic in Naples while I quietly seethed, preparing myself for a long night of explaining my situation to Italian police and trying to negotiate an emergency passport. I was scheduled to be in Positano the next day for the start of a conference. “It could be worse,” I kept telling myself. “Documents can be replaced.” Though I knew no hotel in Italy would allow me past the front door without a passport. I wondered if I would spend the night curled up on some chair in a police station. I wondered how long I would be stuck there.

Less than five minutes into our ride, the taxi driver got a phone call. He then tried to frantically explain to me—his hands alternating between gesticulating wildly and gripping the steering wheel—that the hotel found my passport. He tried typing translation into his iPad, and it kept coming up as “Want to go to passport hotel?” I was trying not to get mad at him. I just kept saying “Please, just take me to the police station.” He threw his hands up, turned the cab around, and we were back at the front of the hotel. We were in the car less than 10 minutes, and I was completely confused. The driver told me I owed him nine Euros. He motioned to me to go inside, and there, in the lobby, stood a tall, handsome fellow wearing a UNA Hotels uniform and holding my passport. It’s as if I had written my own screenplay. Good-looking, honest, and in possession of the exact piece of paper I needed to keep going. He looked at my photo in the passport, then at me, and then handed it to me, like he had picked some pretty spring blossom. I threw my arms around him.

I don’t know who Antonio is or how he was raised, but I hope there are Antonios everywhere. That Saturday night in Naples could’ve gone in so many different directions for me, it could’ve been much, much more than this weird, very stressful half-hour of picturing some thug taking off with my passport, imagining all the different ways he could have leveraged and profited from my identity. We are raised to fear. We are taught to distrust—and that to think differently is at your own expense.

Once settled in my room, I ordered a glass of red wine with my room service, and when it arrived, I toasted Antonio. I played salsa music and reveled in the joyous surprises that find us, which are all the more special when we are lost and don’t know the language. I sipped red wine and wished Antonio all the good health and prosperity the world had to offer while he was five flights down somewhere doing his job. I wished him a gorgeous girlfriend or boyfriend or both, financial comfort, and a long life filled with his favorite things. Perhaps, bending down and finding a lost passport felt like nothing to him. Maybe he never entertained the idea of pocketing it and telling no one. Maybe what to do was just simply clear. Apparently, as soon as he found it, he informed the front desk, which called the taxi driver. This all happened in minutes.

How quickly things can change, good or bad. And I think of this as I read the news out of Brussels while sipping coffee from my sofa, feeling so far removed from all this after having been in Europe just the day before. Yesterday morning, I was in Zürich’s airport; we all know the banality of making our way through airport queues to get to our gate, the anticipation of going somewhere, perhaps home, perhaps a conference, perhaps a vacation. No one really likes being at an airport; it sometimes feels like going to a doctor’s appointment, lots of sitting and waiting for things to happen. During my 12 days in Europe, I pushed myself through waves of people at all these different hubs: crowded bars, hotel lobbies, train stations, security checkpoints, airports. In 2008, we spent Christmas in Belgium, a place I never visualized becoming anyone’s target, but I admit to only knowing a postcard version of Europe and its cities. I spent time living in London, but that was 1993, and it’s a very different world now. We parachute in to beautiful places for vacations or meetings while the nuances of Islamophobia and ethnic and religious tension play out in the neighborhoods. What happens at street-level affects the world, choices on the front steps of apartment buildings, in cramped living rooms, around kitchen tables, that can affect any of us at any time—are happening all the time. I was extremely fortunate Antonio made the choice he did. 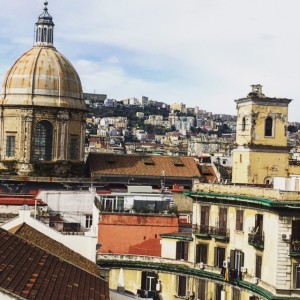 I saw very little of Naples. I was there only 15 hours, and left early the next morning. I will now always associate that city with Antonio. Naples, the pickpocket capital of Europe, was generous to me. What I did see of the city occurred from the hotel terrace at breakfast: sounds of construction everywhere, laundry crisscrossing other people’s terraces, the clanking of dishware coming from kitchen windows. The city was waking up. Cappuccino machines were whipping up morning rituals as quickly as possible. Maybe Antonio only works night shifts, for he was gone when I checked out. I wanted to say “thank you” one more time. I didn’t see him, so I boarded a van headed to Positano, a stunning coastal community that feels like an ancient place with Wi-Fi, as far removed from bombings and terrorism and geopolitical discontent as you can get. It’s a place Italians fled to during World War II—including the owners of our hotel there. It’s a place where we’d all like to flee to when things get ugly. 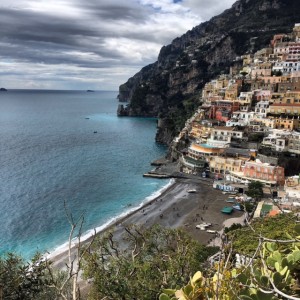