Just over a year ago, I started traveling with a giant plastic pink doughnut floatie. I can’t tell you where I got the idea, but I can tell you the doughnut made its debut in a private pool in Coral Springs, Florida, Christmas 2016. It’s public debut happened in Sedona, Arizona—a rather magical place to step out—specifically, the Amara Resort, which had a shallow pool with a great view, an ideal setting in which to begin.

Pools have always been a thing. This goes back decades. I wrote about my obsession with pools for the Los Angeles Times, and more recently for National Geographic Traveler. I’m like The Swimmer protagonist in the John Cheever story, but without the delusions. Water calms me. And connects me.

You might see the doughnut as a silly plastic toy, but over the past year, my floatie has introduced me to people around the world. Kids are more likely to approach me and say “Hey, is that yours?” and then we start talking, though sometimes an adult lounging by the pool will strike up a conversation. I’ll always remember Abdu, the Indonesian pool guy in Macau, who used a pump to inflate my floatie and commented that the Koreans brought floaties the size of deck chairs.

Sometimes, I’m alone dragging my floatie about but sometimes, I’m not. One of my favorite moments happened at Ormistan Gorge near Alice Springs in Australia where I passed a few swimmers carrying their own large floaties. We exchanged smiles. Floatie kin. Another time, I spotted a woman crossing a busy street in Greenwich Village carrying an inflated swan floatie as large as a bike. So, we’re out there, in the desert, in the city, you name it.

In its first year, the doughnut has traveled to four continents, including four countries (Cuba, Italy, Australia and China), and five states (Florida, Virginia, Arizona, California, and as of last weekend, Texas). Family, friends, and complete strangers have floated and frolicked on this doughnut. I travel with it in my carry-on bag. It rolls up better than a pair of jeans. It dries as easily as a bathing suit. After an afternoon at Playa Del Estes on the northern coast of Cuba, I deflated the doughnut, draped it over my hotel room shower, and by morning it was dry and ready to be rolled back up into the suitcase. We have a routine. In fact, the doughnut makes its second trip to Cuba in May. We’re excited.

The doughnut doesn’t judge. It doesn’t care what you’ve got going on in your life or where you’ve been or where you’re headed. If you like being in the water, “chillaxing,” as my daughter likes to say, and looking up at the clouds, then the doughnut is your friend. A best-selling author, actresses, advocates, artists, and kids from Cuba and Venezuela have floated on my doughnut. It embraces anyone. As long as you don’t have any sharp objects on you, you’re welcome to join and take it for a spin.

Private pools, public pools, freshwater, the ocean—the doughnut and I are open to it all. I’ve always been a swimmer, a bad one who isn’t very fast, but I beeline to the water, indoors or out. I took water ballet as a kid. I swam laps (slowly) for college credit. Along the Great Ocean Road, I couldn’t wait to wade into the Southern Ocean. When I saw the movie “The Shape of Water,” I nodded with understanding.

There are places the doughnut and I would really like to go. In no particular order:

– Lake Louise, Banff, Alberta, Canada
– Various chic hotel pools around Singapore via Flung’s new Singapore guide, which I would trust more than TripAdvisor or even Lonely Planet.
– Back to Northern Territories, Australia, perhaps Litchfield National Park this time for waterfalls and swim holes.
– Hampstead Heath in London. I swam there in 2000; so I’m overdue, and the doughnut hasn’t been to England.
– Anywhere in the Caribbean or Mexico or Central America.
– Hawaii, Hawaii, Hawaii.

Today is my 45th birthday. I’m grateful for continued good health, family, friends, and the opportunity for adventure and to meet new people. My pool floatie connects these dots. We’re out there having fun, soaking up sunshine, seeing the world, making friends, and we’re just getting started. 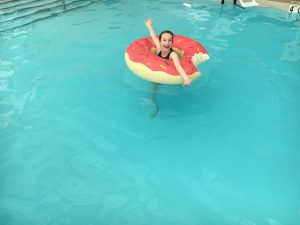 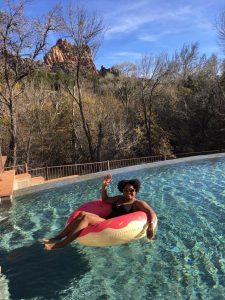 My college roommate from London, Yvette, enjoying the doughnut in Sedona 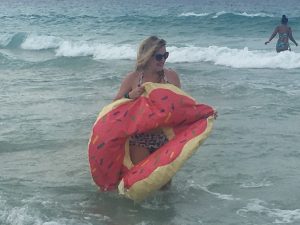 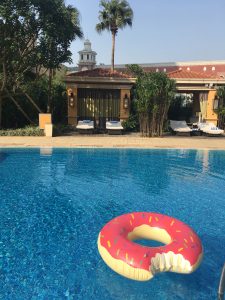 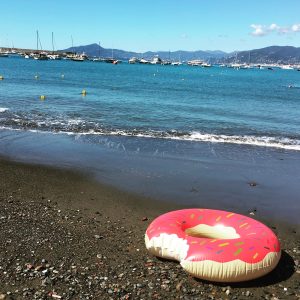 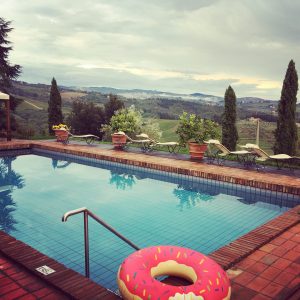 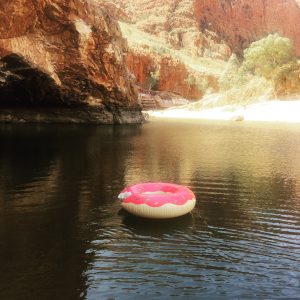 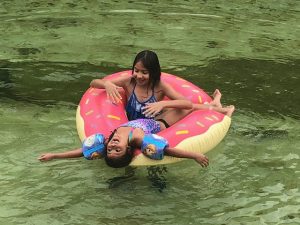