Yesterday, I attempted vegan baking for the first time. It was an epic failure. It doesn’t look like a failure in this photo, but the cake was a sweetened brick smothered in rich, fabulously delicious avocado icing, a yummy way to enjoy antioxidants, fiber and unsaturated fat. So yes, the icing was a big success; the cake was not. However, just licking icing off a cake is what kids do at birthday parties; I’d like to think I’ve evolved beyond that, so the entire dessert got tossed into the garbage (that felt heartbreaking). I will try again so that both cake and frosting are edible…at the same time. 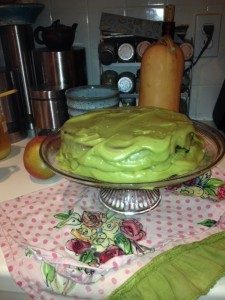 The recipe comes from Joy the Baker, who is a non-vegan Californian foodie willing to take chances with avocado. Only Californians get so creative with avocados. I mean, they make avocado cocktails, avocado beer, even avocado ice cream! Mention combining chocolate with avocado in my neck of the woods, and you get some raised eyebrows. Not surprising, given the East Coast caught on to the chocolate and bacon craze about a decade after we had been eating that on the West Coast. We’re uptight here in the Northeast, and not as trendy as we think we are.

I wanted to explore vegan eating because I have been inspired by our trips to the Woodstock Animal Farm Sanctuary in the Catskills north of the Hudson Valley. We’ve stayed and volunteered there three times now, and it’s been an enriching experience for the entire family. Shoveling poop can be a mentally calming activity. The more we head north to the Hudson Valley and Catskills, the more we learn it’s farm-to-table food country, a place filled with people who care about sustainable, clean, green living, as annoying as that string of buzzwords can be, and where there’s a level of playfulness toward what goes on the plate. The New York City dining scene takes itself way too seriously; a little further north, you can find equally innovative, fresh, organic cuisine without all the fuss. And you can eat out in jeans!

I can’t go upstate every weekend, so yesterday I tried to bring a little bit of bucolic upstate New York and cool California into my kitchen. I had never prepared anything like vegan chocolate avocado cake before (there’s also avocado in the cake batter holding things together), and doing so reminded me of trying wonderful new restaurants along the two coasts. A new restaurant on our horizon is Henry’s At the Farm, which is at Buttermilk Inn in Milton, New York, not far from the Woodstock Animal Farm Sanctuary. Henry’s specializes in local cuisine. In February, we’re spending a few days cleaning up peed-on hay at the animal sanctuary followed by a few days of pampering at Buttermilk Inn. I hope to come back to my kitchen with some confidence and new ideas. And yes, I’ll give the vegan chocolate avocado cake another go. That amazing icing deserves to sit on moist, decadent chocolate cake. Oh, and that butternut squash standing proudly behind the cake in my photo? That’s next on the chopping block; thankfully I already know how to make a tasty butternut squash soup.