On the shuttle ride from Sedona to the airport in Phoenix, our driver shared with us the following:

— A rabid bobcat attacked a waiter in Sedona who was putting out the trash. 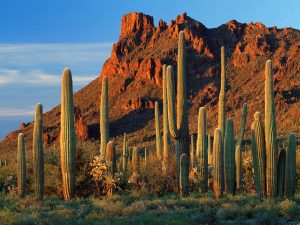 As he relayed these stories, an almost-full moon was peering from between the giant red rocks, those sentinels of mysticism that drew a couple all the way from Romania. They sat in front of us on the shuttle, on their way to catch a flight to London that night. Even in 2017, despite crystal shops and taquerias and psychics, the outskirts of Sedona—and the extraterrestrial landscape that is Arizona—still appear wild, and somewhat still dangerous. I have an insect allergy (hornets and wasp stings might kill me, though oddly, not bees), and wouldn’t dream of hiking anywhere in Arizona without my EpiPen in my back pocket, ready to draw like a 9 mm, which are aplenty in Arizona—an open-carry state. Not that guns keep you safe from everything in Arizona; there are towns named after folks attacked by bees, red ants, and other things that crawled. Even if you don’t have an allergy to anything, perhaps everyone should travel around Arizona with an EpiPen; the state’s legends alone made my antibodies flare up.

Still, I was safe in an enclosed shuttle where the windows were up and the air conditioner was on, even though it was February, about 60 degrees out, and I would’ve enjoyed an open-window ride despite the risks of bugs nearby. And I enjoyed the driver’s stories. All the passengers did. Including myself, there were four New Yorkers and two Romanians. A self-identified Brooklyn Jew who was in his sixties and worked as a commodities trader sat in the front seat next to the driver, and when the driver wasn’t sharing Arizona lore, the guy from Brooklyn was talking about himself. Because that’s what sixty-something guys from Brooklyn do, go on about how New Yorkers are “the strongest people in America,” though given what Arizona residents endured and live with, I beg to differ. My guess is Texans are pretty tough, too. And Alaskans. They are bad asses up there.

Suburban New Jersey doesn’t have stories like these. I live perhaps 500 feet from the British-Hessian Invasion Route trail, a path marched in 1776, so as you can see, it’s been a long time since shit went down in my ‘hood. More recently, black bears showed up hungry, suburbanites freaked out. The black bears don’t even get a chance to go rabid and taunt a waiter (or bite people). The very idea of black bears wandering about keeps the annual New Jersey Black Bear Hunt legit, some bullshit about keeping black bear numbers in check. Just another blemish on a state that lost any sense of conservation long before I reluctantly unpacked my bags here. Drive to Atlantic City or any spot along the Jersey Shore and you’ll see what I mean; every inch of road leading up to the beach has been commercialized with billboard after billboard; it takes forever to get a clear view of the ocean without something getting in your face to tell you to buy something. It doesn’t have to be this way; in Vermont, billboards are banned so as not to obstruct the lovely view. This has been the case since 1968. Only three other states do this: Hawaii, Alaska, and Maine, three states home to lovely views. New Jersey decided differently, going after commercial potential, as New Jersey does. As for Arizona, I saw a few billboards along the highway, but not as many as I see en route to the Jersey Shore. It’s as if Arizona businesses decided not to compete with the landscape because when towns are named “Deadman Wash” you know who’s going to lose.

I spent a week in Arizona earlier this month. The sunlight and lack of New Yorkers (until the shuttle ride), and the fact that New Jersey was 2,000 miles away were all very rejuvenating. Living here depletes me. We settled in a region we didn’t know to be a part of a blue ribbon school district and close to good jobs. During my 6 1/2 years in this snobby suburb, and my 13 years total in Bergen County, New Jersey, I have grown to detest this state the way I detest Donald Trump, who built up his name in the sandy cesspool that is Atlantic City. Both share a phoniness and materialism. I now try to arrange my days so I interact with New Jersey as little as possible: the traffic, the accents, the entitlement. Yes, those things exist outside of New Jersey, too, but here, those things are an inescapable rash, and I’ve tried every imaginable balm I could think of: getting involved, not getting involved, yoga, meditation, taking trips, staycationing, reading books, making friends, distancing myself from people. Living here is a constant state of coping.

If you read any of my earlier posts, like the ones written during my first year or two here when I thought New Jersey would just be another pit stop, I sound more like an anthropological observer than a resident. Six years in, we bought a house in a leafy burb (yes, they are always leafy—such towns take great pride in their trees) thinking quiet suburban living and great schools were simply the next phase of life, like getting your period or your losing your virginity, a milestone to get through. Honestly, we weren’t thinking of what we wanted in a community, but the education opportunities for our daughter. I had never lived in a suburb before—only farm towns and big cities prior—and genuinely thought “How bad can it be?”

New Jersey is a soft place for soft people who don’t want their views challenged and who love to discuss retail opportunities. Consumerism is a competitive sport here, so I see where the New Netherland name comes from. When I first moved here, I thought jokes about New Jersey were unfair, just Manhattan elitism that people echoed to sound smart and otherize others. Now, I say joke all you want about New Jersey, for it’s likely true. There is judgmentalism everywhere in the world, but if there were a Judgmentalism Olympics, I would put my meager freelance writer’s earnings on the suburban moms who are my neighbors. They would kick ass, and walk away with all the gold medals. These women have an opinion on *everyone* especially people they don’t know very well. These opinions tend to come out after a few glasses of wine, or sometimes they are bandied about in school parking lots. Apparently, if you have a master’s degree, a house worth at least $600,000 (and that’s on the cheaper end), and drive a Honda Odyssey or Sienna, then you know things, the kind of things you can’t dig up at the town library. And these things tend to spill out when the booze flows. (I’m a lightweight, and actually not really all that interested in alcohol. I’ve learned I don’t need it to be interesting.)

Which is why as we were heading south on Interstate 17, with the Tonto National Forest on my left, and hints of the Prescott National Forest to my right, where rocks are so big that they have names, where stars—even the Milky Way—are actually visible in the night sky, I felt jealous of the white settlers who came this way. Yes, they faced infection, illness, starvation, wild animals, American Indians, or simply being lost in a place that was too vast, too lacking in borders to be real. I envied the singularity of their journeys, the uncertainty of their possibilities. For here, back in the Northeast, amidst all this 21st century affluenza, when you have everything, there’s apparently nothing left to do but to strive to keep everything and pass judgment on those who don’t have what you have. Maybe this is what Scottsdale, Arizona, is like today, I do not know. But I would have loved to have walked around one of those Arizona ghost towns with the unfortunate names, listen to the breeze move through dilapidated buildings, think about what people were trying to forge then, what they were risking, and why.