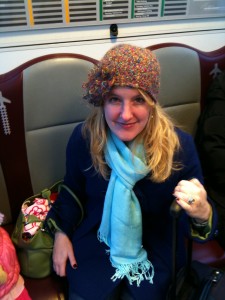 This week, The New York Times featured an article about all-inclusive resorts stepping it up and making their allure more alluring. These are difficult economic times and free drinks isn’t a strong selling point anymore. The all-inclusive resorts are adding perks to their packages such as luxury meal deals, a variety of water sports, and a wider range of children’s programs. Obviously, resorts have harried families seeking a few relaxing days or weeks of sun and fun in mind.

More interesting than the article were the comments–remarks such as (and I’m paraphrasing) ‘you can’t experience another culture when you go to resort,’ or ‘why spend all that money to sit on a beach when you can just go to Florida’ or ‘a packaged vacation doesn’t mean you have to think.’ 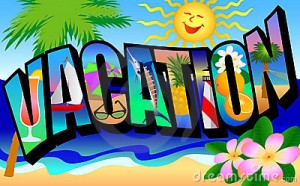 I used to view all-inclusives the way I still view Wal-mart–commercialism at its best and worst. That changed in 2007, when, after a few trying years, I was ready to spend the money to go somewhere far and beautiful and sit on a beach. We picked Coyaba, a small resort in Montego Bay, Jamaica, got on a plane, and four hours later, sat on a beach feeling pretty good about life.

The all-inclusive is good for just that–taking a break. I didn’t go to Coyaba to experience Jamaica. I went to cocoon somewhere warm. All-inclusives are not the best way to experience a culture, and that’s ok. After Coyaba, I no longer viewed resort guests as mindless tourists leaving obnoxious footprints all over what was once a pristine island. Many of them were just tired or overworked, like me, and just wanted to sit on a beach, read a good book and add another stamp to their passport, like me.

There’s no need to argue that all-inclusives fail to offer cultural insights because that’s not what they’re meant to do. If you want cultural insights, pack light, expect inconvenience and go with the flow. A year after Jamaica, we did 10 days in Quito and Galapagos Islands. The reason for the trip was that my daughter was a flower girl in a wedding taking place on the island San Cristobal. Look it up on the map — it’s far. We have family down there, and were fortunate to have enjoyed a very un-packaged sojourn that took us to hostels, beaches, highlands, and along some bouncy truck rides on some very dark, winding roads. Food took forever to arrive, sea lions blocked access to the beach, flights didn’t show up when the schedule said they would, crabs chased after my kid’s toy, and the Internet cafe was useless. There were no itineraries, and sometimes we had nothing handy to eat or drink but Oreos and Nescafe. And you know what? The trip was awesome, and just as rejuvenating as our four days in Jamaica, which catered to our every whim.

Mix it up. Every place has something to offer and every vacation is what you make of it. Doesn’t matter if you’re paying a la carte or if you paid one price to sit among pale, obese Americans who talk loudly and call everyone Jose (that actually happened during our trip to Spain). We do urban trips and for those, we often stay at two-star B&Bs like during our jaunts to Bruges, London and Paris. Pack comfortable walking shoes and don’t worry about calorie-counting–you walk it off with all the museums, shopping, and sightseeing (and save money on taxi fare). Our trip to Quebec next month will be like this. We also go rustic and swing a few different ways here–sometimes we’ll camp, like we used to in Shenandoah Valley or Assateague Island–sometimes we do mountain resorts like Mohonk Mountain House. When we return to California in August, we’ll be among the sentinels of the forest–the Redwood trees, and we’re staying at Glen Oaks Big Sur, a lodge that combines pastoral chic with mid-century mod. I can’t wait!

And we throw in the occasional all-inclusive, like our 2011 trip to Dreams Cancun. Yes, there were a lot of loud, heavy people at the resort drinking drinks the colors of popsicles and getting louder by the minute. We used Dreams as family headquarters and ventured off resort a few times. Based on our own observations and the reaction of our concierge, not a lot of people appear to do this unless they were going on another packaged trip, such as a bus ride to Xel-Ha (which we also did).

Coming up for 2013, we’re eyeballing a possible camping trip in Arizona and we want to celebrate a milestone birthday in Japan. Both trips should give me plenty to talk about.

Inspiration can come from anywhere and take you everywhere. For example, we went to Cuba because I read a magazine article while in Vienna, Austria, about Cuba’s inability to finance restorations of its historic buildings. Convinced everything would crumble before we had a chance to see it, I booked a trip to Cuba and enjoyed one of the most colorful, memorable weeks of my life. So what if the beaches are guarded? I encourage everyone to visit Cuba because when the Castro family dies, Starbucks and McDonalds will crop up like weeds and crowd out the beautiful decaying colonial buildings and virginal white beaches. Then Cuba will look like almost every other place on the planet. Here are a few shots of our trip in June 2003; not quite mojitos with Fidel, but still awesome. 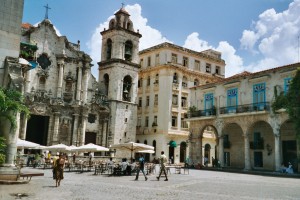 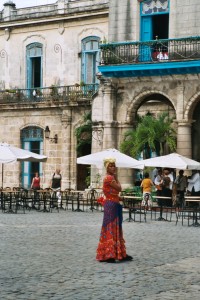 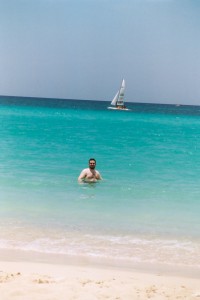 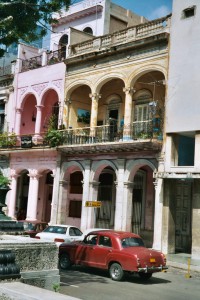 Once, I was inspired by poultry. Yes, poultry. I read an article about wild chickens roaming Key West, Florida, and convinced my husband that we needed to run with the chickens–a much safer version, in my mind, than running with the bulls. We flew to Key West about two years ago and, much to my and my daughter’s delight, we zig zagged our rented bikes among the chickens. Later, we ate some, though I’m not sure our meals were cousins of the “free-range” chickens we biked with.

Now, I’m inspired by Frommers. 2012 marks Arizona’s 100th anniversary of statehood. Arizona happened to be on our list because a close friend recently moved there, but now this image of hot air ballooning across Sedona, Arizona, has me rushing to get there sooner rather than later, and I don’t even like to fly…on anything, whether it’s filled with jet fuel or oxygen. But I’m willing to skip the Xanax and hop on a hot air balloon if it means experiencing this stunning view.

Sticking with Arizona, another stop on my wish list includes “the Wave”, though I’m not a seasoned outdoorswoman; most U.S. national parks; Ireland’s countryside; Chiang Mai and Phuket; Italy–again, since I only spent four days there in 1996; almost anywhere in Africa; kimono shopping in Kyoto; Cuenca, Ecuador; the Canadian Rockies; a yoga retreat to India; and Poland, because that’s the mother land and I have a feeling I’ll blend in nicely over there.

I’m also very excited about our next jaunt, which will take us a few hundred miles north to the picturesque city of Quebec for some je ne sais quois. Since we’re driving and not flying (not because of a fear of flying, but because we’re cheap) we’re splurging on the hotel. I’m looking forward to sampling fromageries and all things dipped in maple sugar. Maybe there will be a dusting of snow on the ground. My last trip to Canada was a weekend in Vancouver more than 11 years ago, so I am long overdue for a return holiday. During my two nights in Vancouver, I stayed at the hotel President Clinton had visited while he was still in charge, and dined at Le Crocodile where I witnessed some of the most skilled tableside fileting of fish ever performed. I hope eastern Canadians are as talented with a blade as their western cousins.