Celebrate the Lunar New Year in the Berkshires? Sure, why not. Actually, the scheduling happened by accident, but I’m visiting Kripalu this Friday for a Buddhist meditation and yoga retreat for bucolic escape and the chance to embrace something I’ve been wanting to learn for a while. Kripalu is a three-hour drive away, and wasn’t on my radar two years ago when I blogged about yoga retreat travel, but I’m excited to go and learn something new.

Unfortunately, that means I’m going to miss New York City’s New Year’s Day parade in Chinatown uh-gain, that wonderful kaleidoscope of reds and golds that I am so eager to see. It is the Year of the Horse, which I believe is related to hard work and money, so here’s hoping for a lucrative year for everyone, particularly us freelance writers! To kick off the Year of the Horse, the family and I will swing by Roosevelt Park for Lunar New Year (or Chinese New Year depending on who you talk to) celebrations, before I get on the road to meditate in the Berkshires. The Firecracker Ceremony and Cultural Festival begins in the late morning and runs through the afternoon on Friday, January 31, if you’re in the area and looking for something interesting to do on a Friday. The big parade is on Sunday, just a few hours before the Super Bowl. I can’t believe we’ve lived here a decade and haven’t been to this event yet, which goes to show there’s always something new to discover about your backyard. 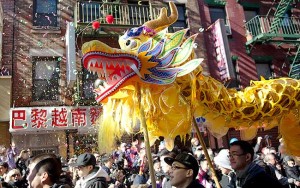 Speaking of backyards, I recently wrote about being a travel writer without traveling far, an awesome strategy for anyone on a budget (that’s us) or for anyone who hates flying (that’s definitely me) or for anyone who just really, really, really loves where they live and wants to shout it from the Internet mountaintop. So go poke around your town and dig up a story. Reality is always stranger than fiction, anyway. I found reality to be stranger than fiction during my recent trip to Phoenix where I saw more signs for guns than actual guns. Pam Mandel of Nerds Eye View was kind enough to let me opine about these observations on her blog. Outside of Phoenix along the Interstate, you’ll find plenty of signs for pie, which to me feel more welcoming. Someone needs to shoot a movie out there about all the wacky billboards in the Southwest.

And since I’m shilling myself today, I’ve got one more byline coming up; next Sunday my article about Taos, New Mexico, is supposed to appear in The Los Angeles Times’ travel section. This will be my third story for the LA Times, and it has given the impression to some that I’m a West Coast writer, which I once was, but haven’t been since 2000. But it’s true that in the world of newspapers, my byline has appeared more often in West Coast print, so perhaps for 2014, I’ll focus on trying to break into The New York Times, a freelance writer’s dream.

For years, I’ve based my hotel choices not on price or location but on the quality of the pool. Indoor, outdoor, it didn’t matter, but there had to be a well-maintained pool, one that the hotel was proud to showcase, not something hidden on the sixth floor at the end of some abandoned hallway.

I turned my Cheeveresque pool quest into an assignment for The Los Angeles Times (Nora Ephron’s mother is right–everything is copy!). The article appears in today’s LA Times travel section, focusing on Southern California pools with a few pools nearby in the desert, as well as some surprisingly alluring pools in cold places like Seattle and Montreal. 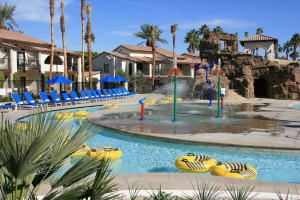 I wish the Northeast had California’s pool season. I live here, the swankier pools are there, so we travel out west once a year for about a week or two every summer and, yes, we sample the pools (and the beaches) the way you sample Napa wines. You can read about my family escapades to California here. Our annual California vacation involves a week in LA so Mike can visit the Mother Ship (his employer) while Anna and I soak up quality pool time. We make time to explore other parts of California, too. One year it was a day trip to San Diego. Another year we did Disneyland. Last year, we did Big Sur and San Francisco. This year, we’re doing four days in Monterey and a day trip to San Juan Capistrano Mission. Ironically, the day my pool article debuted is the day I paid the bill for our family’s summer town pool membership, though pool season doesn’t start until Memorial Day weekend, so we have a two-month wait ahead of us. Meanwhile, SoCal families may be reading my story now and could spend Easter poolside if they chose to. It’s a sweet life out there in SoCal. New York City’s bagels are better, but SoCal has a lot going for it. It’s always a beautiful sight when our flight descends towards LA airport and I can see all the backyard pools glistening sky blue.