What could bring me to my knees begging for raw vegetables? The New York Chocolate Show, one the most decadent experiences I’ve had in New York City, and I’ve dined at Daniel–that was decadent! Never have I had a weekday morning rife with sexual innuendo, alcohol and sugar all before noon. The New York Chocolate Show is food porn at its best, though don’t dismiss this show as fluff–serious chocolatiers and chefs present. The show looks small when you enter and I got cocky. My friend and I took in the room and said “we got this.” A half hour in, after sampling chocolate black pepper gelato, French truffles (don’t chew, let the truffle sit on your tongue), caramel sea salt brownies, vegan nutella-like spread, dark chocolate wine, dark chocolate nubs, fair trade dark chocolate, and dark chocolate cookies, I knew I was out of my league. I looked around and others were just warming up.

Cocoa is a potent plant. It grows in hot places and is usually beaten, molded, and manipulated by people in cold places. Chocolate reflects the ultimate colonialism dynamic, but I’ll save that for loquacious grad students high on pot looking for a topic to debate at 2 am over cheap booze.

The show was $35 per person, ends today and returns to New York City every November. I was disappointed the show discontinued the chocolate fashion show. A cat walk of waifish women wearing fairly traded cacao whipped and molded into some kind of fun party dress would have been the icing on the, um, cake. When chocolate became associated with sex, I don’t know but I will say this: chocolate samples there tasted like sex–salty, sweet, silky–need I say more? This is a family-friendly blog, but I’ll be honest–I lost track of how many times I bit into a sample and blurted out “that’s orgasmic!” and the chocolatier or booth gal just smiled and nodded because they’ve heard this hundreds of times before.

Aside from the dirty chocolate talk, I learned a few things. White chocolate is a true chocolate, it just has a lower ratio of cacao. Chewing chocolate interrupts the taste–let it sit on the tongue and just hang out while your body does the rest. During a macaroon demonstration I realized I would never have the patience to make one. Sea salt is the hot dessert trend, like bacon was on the West Coast a decade ago. And chocolate black pepper gelato is a party in the mouth. The show marked its 15th year this year, and is truly an international experience. French, British, and Ecuadorians joined plenty of New Yorkers and a strong delegation of Californians in dishing up the goods. Much of what I ate was the flavonoid-rich dark cocoa, the good stuff that’s supposed to make my heart and blood vessels happy. I never once felt like I was eating something fatty or overly sweet at the show. And I didn’t leave the show feeling full, like the full you feel after Thanksgiving. I left feeling saturated.

I’ll quickly list my favorites: Salt of the Earth Bakery, The Grenada Chocolate Company, an up-and-coming chocolatier based on the tiny Caribbean island and working to boost the local economy with a bean to bar business; Prestat, which apparently is a designated chocolatier to Queen Elizabeth II (Prestat sends her a white chocolate bunny every Easter); Screme Gelato Bar; and No Chewing Allowed , which maintains a stand at Bryant Park. Nearly two hours in, my friend and I hit a wall. Our palates couldn’t take anymore. I needed a cigarette, a salad, and a nap. Since I don’t smoke (and neither does my friend), we went out for salad. Chopped broccoli never tasted so good. Once back home in my suburban nest, I curled up on the couch and napped for a half hour–with a big smile on my face. 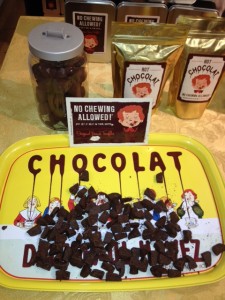 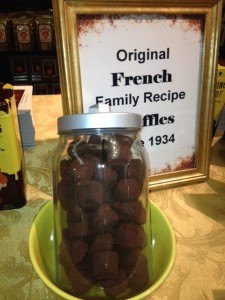 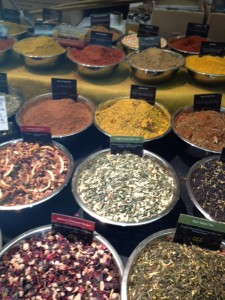 I wished I had seen how this turned out; a chocolatier was sculpting Lucille Ball in the beloved Chocolate Factory episode out of cake and fondant. 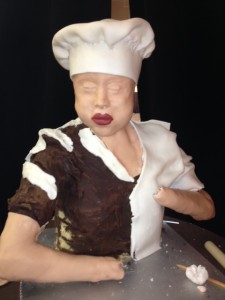