Last year sometime between Christmas and New Year’s Day—that week of excess and reflection—I vowed in a half-assed but hopeful way to go on a travel diet for 2014. It was time to save more, spend less, do all the things that the financial commercials advise you to do. The first item on any financial adviser’s chopping block: the family vacation.

But as anyone who attempts to stop eating bacon and doughnuts every weekend because of a New Year’s resolution can tell you—all diets fail. 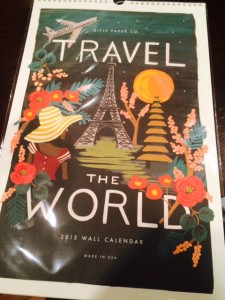 “The Year of Austerity” also known as “Travel Diet 2014” never really had a fighting chance. We kicked off the new year flying home after visiting friends in Arizona (on this day last year we were traveling from Phoenix to Flagstaff and then on to the Grand Canyon). By April, we were on a plane to Iceland. Two months later, we were smothered in sunscreen and hiking Colorado. A few weeks later, our July trip to California was cancelled last-minute when Mike’s mom passed away, but later this year, he was back out on the Left Coast—twice in three weeks. In fact, my husband’s travel surpassed my own this year: he white water rafted in Idaho, mingled with Jedis and heroes in Atlanta for DragonCon, spent two days sequestered in a hotel conference room in Orlando, Florida, then flew to Pasadena, and came back for two-and-a-half weeks before heading back to California for stops in San Francisco and Los Angeles. He arrived home less than three weeks ago with some winter respiratory virus that’s left us all hacking and begging for NyQuil. In between all this we scored a gorgeous late September weekend in Cape Cod, and I escaped to a magnificent week in the Berkshires. Not traveling is just not who we are.

Science has shown that vacation planning boosts happiness. This certainly feels true for us; the anticipation of any trip brings a bounce to our daily routine. A 2010 study suggested that the excitement of any upcoming vacation was all that was needed, for apparently after a family holiday, folks became grumpy again. Not us. We’re buzzing before the trip, during the trip, after the trip. Travel is a geographical adventure, not an emotional escape for us; we’re happy at home or on the road, but not having a trip on the calendar would certainly darken my mood. Travel is my Prozac.

So for 2015, I’ve reframed the resolution so that I don’t set myself up for immediate failure because clearly I need some amount of travel in my life so I don’t become depressed. I hate to use that buzzword “balance” but for a lack of a better word, I’m aiming for balance in 2015. And I think I already accomplished some balance this past fall. For example, a small inheritance from my mother-in-law allowed me to pay off my student loans earlier than expected, a balance that hit “zero” right before Thanksgiving (the best kind of loan balance of all!). I suppose we could’ve blown that money on a trip, but that never entered into the equation. Getting rid of that loan was the smart, prudent thing to do, and not once did I feel tempted by ads of dreamy, sandy beaches. Student loans suck—especially at a rolling 7 percent interest rate, which is what I had been paying since 1996. Class of 2013 graduates have an average of $28,400 in student loan debt; mine was significantly more than that, and we squirrel away money every month so our daughter won’t carry such a financial burden. Not every dime earned disappears on vacation. See? Balance. And it’s not even January 1!

Other expenses need to be paid off as well and our old house always needs some TLC. Our dishwasher sounds like NASCAR and our lawn mower can barely chew a blade of grass, but that’s middle class life in America. Appliances will get replaced, cracks in the ceiling and walls will get fixed. Unlike middle class America, I don’t spend weekends dumping a few hundred dollars here and there at Target or Home Depot, something I hear my neighbor talk about. We’d rather put that money towards trips, which is what we’re doing in about seven weeks. We’ll be heading to the Caribbean spending February break soaking up some much-needed vitamin D in the Bahamas, specifically Exuma. We skipped the all-inclusive scene to do something a bit quieter, though not necessarily cheaper, and we’re looking forward to swimming with pigs and feeling the sun on our skin. January and February in the Northeastern United States are my two worst months; I struggle with darkness, go fetal on our couch and beg for Persephone’s return. In my opinion, the Caribbean is cheaper than eight weeks of cognitive behavioral therapy, especially given the hourly rates New York City shrinks charge.

Bahamas will be it for international trips in 2015. We’ll putter around the continental US, fix some things around the house, pay some stuff off, ease into the new year with essentially more of the same, which works for us. If this time next year I’m blogging again about the cool places we visited and the sites we hope to see in the coming year, well, then I couldn’t be happier.