City life has many things to offer and engaging with the cosmos isn’t one of them. Lately, I’ve been feeling about the night sky the way I felt about the sun when I lived in Seattle for three years—I miss it. I saw part of that lunar eclipse three weeks ago, which was amazing, yet on a night-to-night basis, I can count on one hand the number of stars I see from my backyard or from my front step. Neighborhood street lamps and that massive light bulb across the Hudson River known as Manhattan block out a substantial chunk of natural sky. New York City is America’s biggest city, something I feel acutely whenever I ride the subway, wait in line for a bagel, or try to enjoy anything remotely celestial. Look up from my backyard and you’ll see United Airlines crisscrossing with some transatlantic flight crisscrossing with some rich guy’s Cessna (we’re also near Teterboro Airport) crisscrossing with the occasional police helicopter. Sometimes, on a clear night, you’ll see a star or two, which, one of them you later learn turns out to be Venus. In the winter, I can usually spot Orion, but that seems to be the only visible constellation from my little corner. This weekend while driving around the Catskills, I stood under a black, cold sky punctuated by millions—no gazillions—of stars. I saw the Big Dipper for the first time in ages. 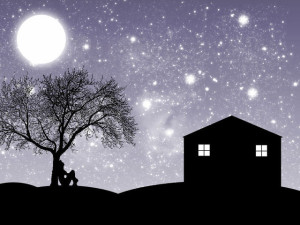 I’ve met people here who find the silence and vastness of rural landscapes and open sky overwhelming. They need the buzz of urban life to feel tethered. I increasingly prefer the country. If walking around the forest changes the brain (and I did that in the Catskills, too, and genuinely felt calmer afterward), my guess is stargazing at night also positively affects our synaptic energy. But under proper conditions, like what I enjoyed Saturday night. No planes. No helicopters. No anything trying to go anywhere. Just big, black, bright stillness.

Escaping the city for the something more pure is about as old as New York City itself. The word “vacation” is said to have been created here during the previous turn of the century because the rich regularly vacated the city for more pastoral backdrops, Theodore Roosevelt among them. I find myself craving starscapes, feeling pulled toward big open spaces so I can drink in that sense of awe that is the night sky. I’ve never been a very successful student of the sciences; I earned a C in my freshman astronomy class. When looking up, I have no idea what I’m looking at and I’m okay with that. I trust everything Neil DeGrasse Tyson says. I like the mystery of what’s above. Night skies are humbling, with a depth and complexity that surpasses mountains and oceans, perhaps because unlike mountains and oceans, the sky is untouchable. Simultaneously aloof and daring with a rhythm that we are a part of but where we have no say. The last time I witnessed a sky so pregnant with stars was when we were in Taos, New Mexico, a town that preserves much of the outdoorsy mysticism once in abundance in this country, and perhaps explains the alien lovefest that still thrives there. New Mexico is a place where people look up. New York City is a place where people look down, eyes glued on smartphones, away from each other.

Inside the Catskills farmhouse where we were staying, I thumbed through a copy of Henry David Thoreau’s “Walden”. On the subject of stars, would it please Thoreau to know that on Amazon—an arbiter of the unnatural world—“Walden” averages 4.2 out of 5 stars, with more than 530 reviews? Even online, more stars is better. And would he be intrigued by the conversation happening in the reviews of “Walden” where people discuss the generation gap among those who appreciate Thoreau’s observations and ideals? I appear to be in the middle of this gap. Thoreau’s phrasing is thick—paragraphs go on for a page—and while I enjoy a long read and resent the current listicle-ADHD online reading culture, the pages were a commitment.

But I want to keep going and read more. Thoreau struggled with respiratory illness much of his adult life and wrote about the restorative powers of being outside. “I cannot preserve my health and spirits,” he said, “unless I spend four hours a day at least—and it is commonly more than that—sauntering through the woods and over the hills and fields, absolutely free from all worldly engagements.”

Truth. Though who does four hours of anything anymore that doesn’t involve WiFi? I’ll be the first to admit I’m not very good at being outdoorsy. Camping is a lot of work. I don’t own gear. I hate bugs (I’m allergic to hornet and wasp stings). I can’t read a map. I don’t really care for trail mix.

But I do love being outside and grabbing what little pieces of it I can. Thoreau might find today’s ideals of communing with nature somewhat ridiculous. So much as been pushed out that great effort is made to create sanctuaries for what’s left, such as the one square inch of silence in Washington State’s Olympic National Park. Noise pollution is just as much of a problem as sky pollution (though the suburbs are quieter here, just not very dark). Who besides Zen monks and hunters spends hours of uninterrupted time surrounded by trees and silence? My last four-hour stint with Mother Earth was hanging out in a nest at a Big Sur glamping resort where I could walk uphill for sushi. Saturday night, I lasted less than 10 minutes just standing alone on the frosty grass watching the stars, no street lamps interrupting my view. Temperatures had dropped to the thirties, and while I wore a hat and warm coat, my body was still holding on to September.

Yet that ten minutes mattered. I felt my nerves disentangle a bit, my pulse settle, my thoughts slow down. Watching the whorls of stars, a wave of calm moved through me, something I hadn’t experienced since being out on the California coast last summer. The night sky made me feel small. And for that I was thankful.