Our last few spring breaks have been quite cold. Our school district has spring break every April. Last April, we skied in Vermont; in 2014, we went in Iceland—beautiful and absolutely worth a repeat visit, but cold; in 2013, we were in Japan enjoying spring chill and cherry blossoms; in 2012 we were in Quebec freezing our butts off and warming up over pots of maple fondue, in 2011, we went to Cancun and Isla Mujeres, and in 2010, we visited Key West, Florida, more traditional spring break routes.

Growing up along the Great Lakes in the Snow Belt, that frigid stretch of the Northeastern United states that gets pummeled with “lake effect snow,” spring break always meant more than just a vacation. It was that much-anticipated week where you went somewhere to thaw out after months of cabin fever caused by playing too many board games or watching too much TV. You were sick of shoveling snow, helping your parents scrape ice off the car, and being yelled at by your mother for tracking dirty snow into the house from your snow boots. Spring break was synonymous with wearing fewer clothes, getting sunburned, leaping into giant, Smurf-blue swimming pools and drinking drinks made of colors too bright to exist back home, for who anyone north of Florida drinks Curaçao, that Windex-hued liquer flavored with laraha citrus?

I lived vicariously through other people’s interpretations of spring break. My family did not take springtime vacations, and we certainly didn’t go anywhere, not even anywhere nearby, to pass the school breaks. There was no money. Sometimes we went to a museum but most often we were left to fill our days on our own. I always felt jealous of the kids whose families flew to Florida for spring break, and to this day, I still find palm trees exotic despite having been around them now in several different countries. When I joke to friends that “palm trees give me the feels,” I mean it, because those shaggy fronds signal I’m somewhere else. In two years, we are hopefully moving to Los Angeles where I will wake up to palm trees and have the feels every day. 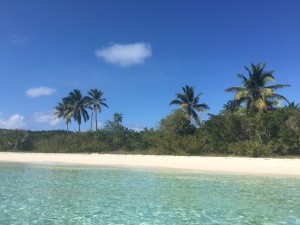 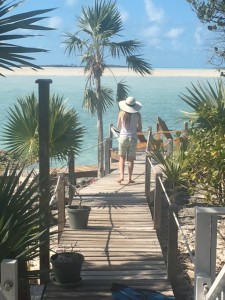 Palm trees are obviously a big part of the scenery at Great Exuma Island, one of dozens of islands in the Bahamas where we spent last week. Exuma is breathtakingly photogenic, and I Instagrammed the hell out of it. Now that I think of it, anywhere in the Caribbean gives me the feels; I’m always happy there. I mean this emotionally as well as biologically; I have seasonal affective disorder, and my vitamin D and serotonin levels were soaring in the Bahamas last week. I could feel the release. Less rumination. Less worrying. Sunshine is good for the soul. I loved sitting out on the front deck of our rented cottage and getting pummeled by sunlight. I loved admiring the trees’ silhouettes against a backdrop where sea and sky were almost the same shade of blue. I have a crush on the word “cerulean,” and that’s the word I kept thinking of while in Exuma, a chain of islands home to just 7,300 people, a place that is part of a much larger archipelago originally called Baja Mar or low seas. It is indeed very shallow in the Bahamas, a region where the focus is outward, towards the water, where people move more by yacht or catamaran or dingy. The commercialized Caribbean vibe makes it easy to forget the Bahamas was once the gateway to the New World, when one day that probably started out like all other days, a stranger in a boat approached. In 1492, Christopher Columbus first spotted what is now called San Salvador Island, about 93 miles from where we rented our cottage. The Caribbean hasn’t been the same since.

People—usually pale Americans, Canadians and Europeans—go to the Caribbean to do the following: snorkel, dive, boat, fish, sunbathe, and, later in the day, eat the things you saw while snorkeling, diving or fishing. I could live like this for months, but spring break is only a week long. We snorkeled almost every day we were in Great Exuma Island, either off our private cove, in Elizabeth Harbour near Stocking Island, or near some of the smaller cays where a red-faced, old-time Bahamian guy named Ray took us out on a boat tour. We swam with the famous wild pigs of Exuma, who have their own Instagram feed, and held piglets born on Valentine’s Day. Twice, we snorkeled small coral reefs, and once you were mask-down, you saw the cast of “Finding Nemo” going about their business; fish of every size and color, some striped, some shinier than others, some bug-eyed, some darting about like over-caffeinated New Yorkers late for something, some just sashaying about, and some slowly circling yellow or dark-orange colored brain corals. We quickly discovered that swimming with the fishes in the Bahamas means something entirely different from swimming with the fishes in New York. 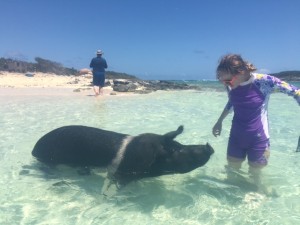 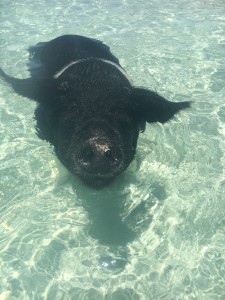 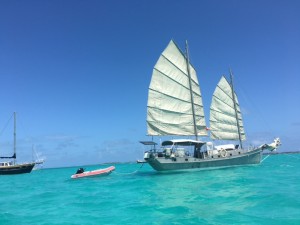 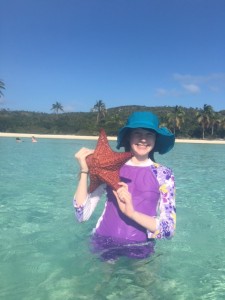 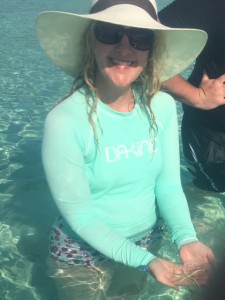 Breathing through my snorkeling tube, I wondered what the fish thought of all these people coming through and spying on them. We held living starfishes big and small, we found sand dollars, we saw a barracuda swim past our boat, we saw conchs that still had their meat on them—and were hoping to get through the day without getting caught, for conch fritters and conch salad are on every menu everywhere around Exuma. Also on the menu: guava cream pie at the Driftwood Cafe in downtown George Town, where they also serve a delicious black bean burger. On three different occasions, I ate guava cream pie for breakfast, lunch, and dinner. Pie does work as a side dish at any meal.

My daughter is not an adventurous eater, and I couldn’t interest her in the guava cream pie, but she’s adventurous in other ways. I could tell she was getting brave in the water. After a year on swim team, she was able to take full advantage of the snorkeling opportunities we had last week, and swimming has given her such confidence, that she started diving for shells and curiously poking around the reef to see more. We had taken her snorkeling in Key West six years ago, and tried to show her how to feed bits of pineapple to the fish, but she lasted less than 10 minutes in the water before freaking out. Last week, we had to beg her to get back on the boat, and once seated next to me, her skin pruned from a great time in the salt water, she smelled like a bag of potato chips. 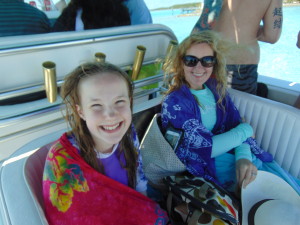 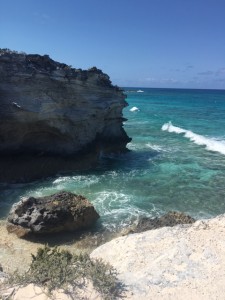 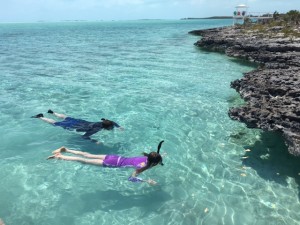 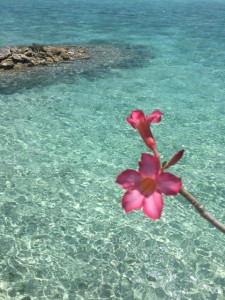 I tried to memorize the colors of the Bahamas during our visit, for even while swimming through these colors, I knew as soon as I got back to suburban New York City, I would miss the high these colors delivered. However, Great Exuma Island wasn’t all beauty all the time—there’s no recycling program, and I tried to pack our emptied plastics and bottles, but they wouldn’t fit in our suitcases. I also wondered about the local waste management system since garbage was everywhere. It’s an island of mixed development, with pockets of poverty alongside flamingo-pink administrative buildings and an old yellow school with not much of a playground. These buildings are just down the road from only a few major resorts such as Sandals and Grand Isle Resort, all connected by the “Queen’s Highway” as it is known, one long paved road running down the middle of the island, which also joins Great Exuma to Little Exuma via a one-lane, one-way bridge. From the Queen’s Highway are countless unpaved roads filled with potholes, which was how we got to our cottage. We chose to vacation on Great Exuma Island because we didn’t want to hang out in a resort bubble. I didn’t want to interact with resort staff. Instead, I chatted up locals when I could, asking a conch fisherman about where he dives for dinner, and talked to a guy selling produce out of the back of his pickup truck what days of the week he came through George Town. Everyone we met was exceptionally friendly. 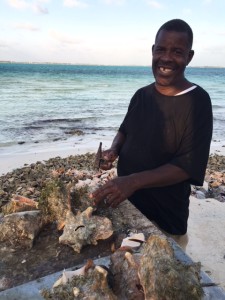 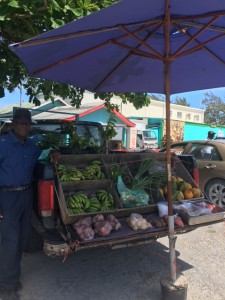 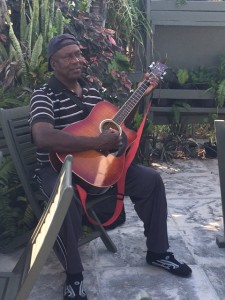 Being out of that bubble meant seeing some things that were upsetting, like piles of garbage or abandoned, rusting school buses or cars left at the side of the road, or empty homes with windows punched out like broken teeth. Yet it also meant unadulterated beauty and wandering the Tropic of Cancer beach on your own, a crescent of white powdery sand that’s at 23 degrees latitude and is going to get super-hot when the Summer Equinox rolls around in two months. The Tropic of Cancer beach is easy to miss, and we mistakenly drove by it twice. The painted line that you can straddle for your photo-op was once blue and is now bleached by the sun; it’s as understated as the fading signpost by the road indicating the Tropic of Cancer was just ahead. What was most impressive about this beach was not the imaginary line that runs across it, but how unsullied it was by anything or anyone. The Bahamians call it a “footprint-free” beach, and they’re not kidding; any footprints made are your own, and quickly disappear with the tide. Jersey Shore beaches are as crowded as highways, often barely a square foot of sand to pitch an umbrella, but here, my daughter ran races against her father and skipped around. The Tropic of Cancer Beach was one of the most beautiful swaths of land and landscape we had ever seen, and yet there were only two adults reading on the sand, two teen boys playing in the water, and that was it for a late Thursday afternoon. No conch fisherman. No rusting boats. No garbage in any direction. No paddleboarders or swimmers. No one standing over a cookout. And certainly nothing that characterizes most American East Coast beaches: no fried dough vendors or saltwater taffy stands or lifeguards looking bored by the job. Just a strip of sand being licked by soft waves of salt water. Just a beach the way beaches used to look. 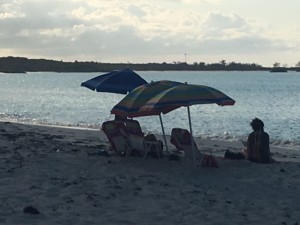 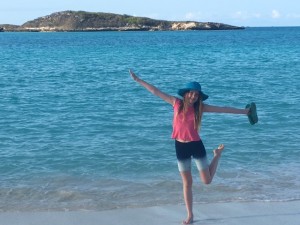 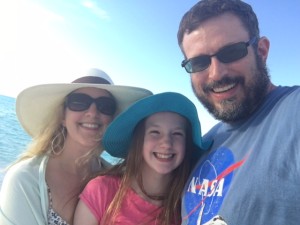