Experiencing Chihuly in a museum in downtown Montreal and experiencing Chihuly in the Phoenix desert surrounded by agave and cacti are equally amazing and completely different even though some of the works of art overlap. Now through mid-May the Desert Botanical Garden in Phoenix is showing a selection of artist Dale Chihuly’s pieces that are situated across the grounds as if colored glass–instead of Arizona’s hallmark colored rock–had pushed through sand overnight. 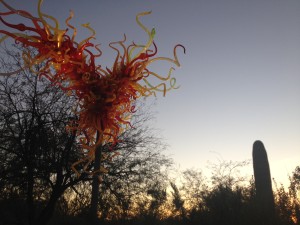 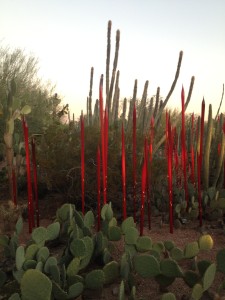 Two pieces were saw in Montreal and that also appear in Phoenix are works from “The Boats” series and “The Sun.” How is that outside, glass takes on a whole different meaning than it does when behind walls? Inside, it’s something to step gingerly past to avoid breaking. Outside, amid flora plucky enough to beat the heat, the glass appears less fragile and more vigorous. Chihuly’s glass works, when viewed outside in the desert, imply water where there is none. I compared the Montreal exhibit we saw last fall to snorkeling through glass, for Chihuly’s pieces take me below sea level and evoke the colors of the Caribbean. In Phoenix, I felt like his art brought the sea to the desert, as if lifetimes ago, back when meteors were striking Arizona, heat and glass and color had bubbled up from the depths of Sonoran rock, and the residents of Phoenix simply built garden walls around their discovery. 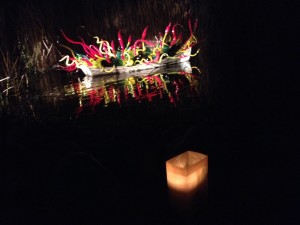 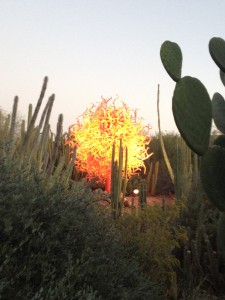 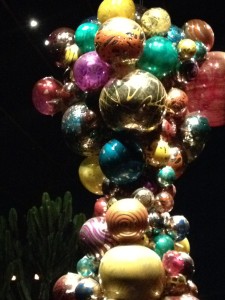 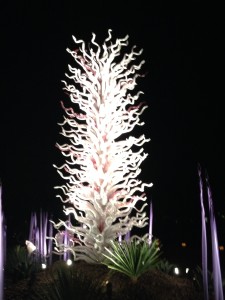 Tickets are $22 for adults, and the exhibit is best enjoyed starting at sunset, a time when Arizona shines. Silhouettes of cacti are everywhere as you walk through the garden, and sunset colors ricochet off Chihuly’s art before disappearing altogether and letting you view the garden in magnificent darkness (and all those stars in the Arizona sky! Wow!). We were lucky to be there during the holiday luminarias, which added even more beauty to an already spectacular evening. The 140-acre garden, established during the height of the Great Depression, is home to about 21,000 plants, including many indigenous plants that are being threatened by mass development (drive around suburban Phoenix and very few homes look older than 20 years). Paths crisscross through the greens and pass traditional adobe buildings. The Desert Botanical Garden is the American Southwest at its finest; that fierce love and respect for nature is encapsulated there and meshes beautifully with Chihuly’s art. I felt a bit rushed since we were there with little kids, but I soaked up what I could. If I lived nearby, I’d return to this exhibit at sunset again and again and again until I knew the names of the all plants that lived there and they would come to recognize me, that giddy Yankee gal at the gate ready to skip through a manicured piece of desert. 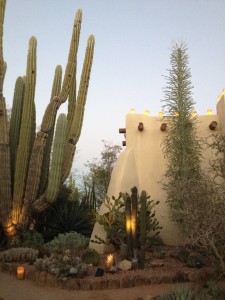 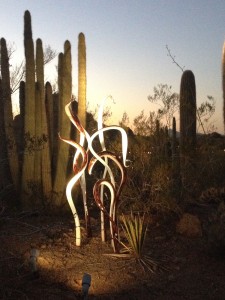 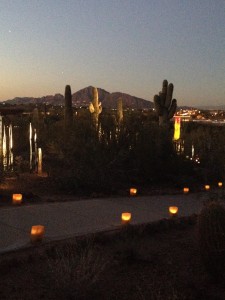