An estimated 2.4 million pounds of plastic enter the world’s oceans every hour, so Seattle-based artist Chris Jordan took 2.4 million pieces of plastic from toothbrushes, combs and all the other junk that fills modern life and created a recreation of the famous Japanese painting “The Great Wave Off Kanagawa” by Hokusai. We’re drowning in a tsunami of plastic, says Jordan, whose interpretation is on display at the fiercely creative Monterey Bay Aquarium in Monterey, California aka the Central Coast. 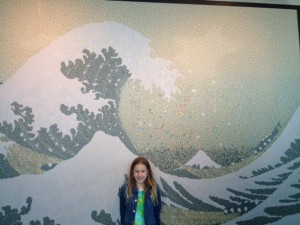 Seahorses and jellyfish are very cool, but the small, yet powerful plastics art exhibit had the greatest effect on me. A seagull made from plastic sporks. A collage of plastic bottles. A lamp upcycled from old plastic. What’s the message? Well, there are several. Plastic chokes the oceans and kills endangered wildlife (plastic comprises 90 percent of the manmade crap floating in the oceans). Plastic has promise (don’t just chuck it, make something beautiful from it!). Plastic is evil (got it). Change is happening, however. Thanks to Los Angeles for being the largest city in the country to ban plastic grocery bags, and now the city council at Manhattan Beach, one of my new favorite places on the planet, seeks to ban styrofoam food containers. I hope this kickstarts other coastal communities and parks into action. 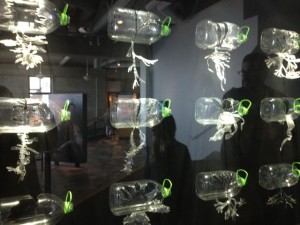 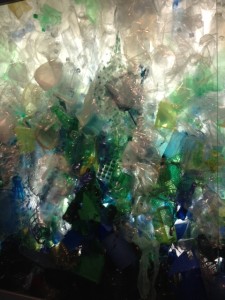 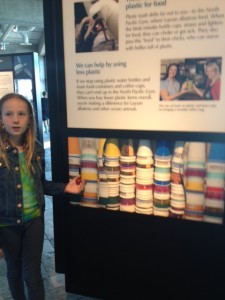 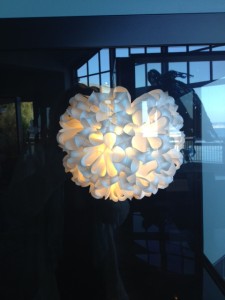 This past spring I volunteered at my daughter’s school lunch recycling program and was horrified by all the individual food packaging that clogs our lives. Afterward, I recycled as much of our household plastic as possible. I hate plastic. I love art (and the oceans). As others walked by these plastic art displays, what were their reactions to what these artists were saying? Did they worry about their plastic water bottles? All the plastic trinkets attached to their kids’ strollers? Would they eat their takeout and toss plastic containers into the trash or leave it sitting on a beach somewhere? Had they recycled all their plastic tupperware, as I did, and did they wrap their kids’ lunches in biodegradable paper towels, as I did? Did they ban Saran-wrap from the house as I did? Who wants to gaze out to the flowers surrounding the bay and see floating junk? No one. We’re all responsible for our environment yet are we all taking responsibility? 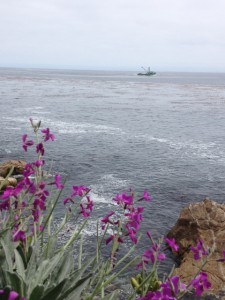 The Monterey Bay Aquarium was visionary; founded in 1984 in the heart of the rusted out fishing factory scene of the early 20th century, this museum attracts about 1.8 million visitors every year. I’ve paid admission to aquariums and museums all over the world and Monterey’s aquarium exhibits are thoughtful, thorough and visually stunning. No one wants to see a plastic water bottle stuck in the kelp forest, but is anyone questioning their individual carbon footprints when they see litter on the beach? A lot of people were taking photos at the aquarium, but I wondered, does anyone leave these museums inspired to change their daily behaviors? The aquarium addressed responsible fishing and eating sustainably-sourced fish, yet Cannery Row has plenty of fried seafood joints. Were these fish responsibly netted before being dipped in beer batter? I have no doubt I ate sushi these past two weeks that probably were not trapped with at-risk sea turtles and sharks in mind. And had I asked the waiter, “Hey, how was this fantastic and deliciously-tender chutoro tuna caught?” I’m sure I would’ve gotten a blank look.

Museums educate, entertain, and elucidate. Do they inspire? I am an over-thinky type and already spend too much time in the grocery store reading up on how a particular organic apple was farmed or whether my lavender shampoo is phthalate-free or were these bananas or this avocado fairly traded? I try to buy local and I try hard not to buy anything made in China. And now I will wonder if my sushi added to the world’s ecological imbalances. Did the tourists at the aquarium, including the guy who blocked Mike’s view and the woman who whacked me with her backpack, feel moved by the aquarium’s many messages? Will they start carrying canvas bags to stores or remember to bring refillable coffee mugs to their favorite cafe? How many of these 1.8 million visitors are now changing their minds about plastic? I don’t often agree with Margaret Thatcher, but we are a society of individuals with individual responsibilities to each other. The aquarium seeks to instill individual action and collective dedication.

Museums are love letters, like the American Museum of Natural History is a Valentine to everything that ever roamed the Earth. Other museums, like the New York Botanical Garden, remind us the importance of preserving what remains. We visited the Museum of the American West at the Autry Center in Los Angeles, which was a time capsule of what glorified the frontier. And other museums like the Monterey Bay Aquarium are stalwart advocates. At the aquarium, tourists Instagrammed photos and tweeted messages, but will this translate into real change? Will people use less plastic at home because of what they saw behind a glass case and read on a plaque? I hope so. 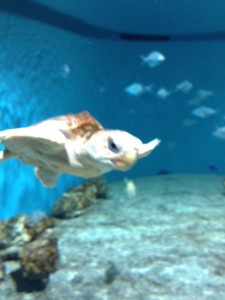 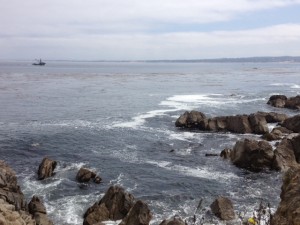 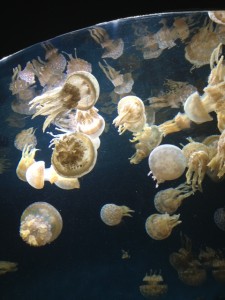 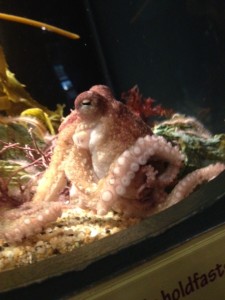