To say I stink at blogging is an understatement, plus it feels so 1998. Social media is microblogging and vlogging, and now, in 2018, everyone has either a carefully curated online lifestyle or a reactive opinion to something. I don’t know where I fit into this, and remembering to blog about something feels like remembering to pay our utility bill.

I started this blog in 2005 to talk about my family’s vacations, and now I’m being introduced as a “travel writer” to people. This floors me because in 1998 when blogging and my journalism career were in their nascent days, a travel writer to me was an elderly white dude who had worked his way up the chain at a particular newspaper for the past few decades, and who wrote about eating poi in Oahu. Or, it was cracking open National Geographic Traveler (which has published me–twice!) and reading something awesome in long-form by someone who didn’t have an Instagram account but was somewhere far away, and perhaps had hammered out observations on a Smith Corona (and if you’re of that age where you think I’m referring to a type of beer, think again). Now, everyone is a travel writer because everyone has Instagram. 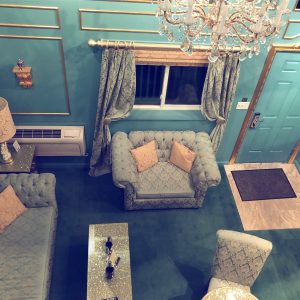 (A favorite room at The Roxbury called “Amadeus’s Bride”)

Lately, I’ve been writing about hotels. For reasons I’m still trying to understand, this brings me absolute joy. And it’s so weird to arrive at this point at almost-45, to feel wow’ed by sharing your opinions on hotels, for tourism boards to invite you to places. You see, my parents did not attend elite four-year universities–or any university–to be groomed for greatness. We struggled financially, and I was raised to attend college, get a job, get married, pay the bills, remain within a short drive from the family, have at least two children, and ride out the years without complaining (I complained). Travel was a luxury, and if you could afford it, was something you did one week out of the summer to some place within driving distance; for us, that was usually Mystic, Connecticut. I was the first on either side of my family tree to actually leave town to attend a four-year, in-state college and come out the other end with a bachelor’s degree. It sounds sad that this would be considered pioneering in 1995, peak Clinton years and the dawn of the Internet, but that’s how I grew up, raised by parents who preferred bubbles of their own making. I didn’t even know what the Foreign Service was until my late 20s when I was building my journalism career, and I look back and wonder if anyone during my high school years had explained to me what the Foreign Service was, would I be schmoozing in nice hotels with ambassadors in places like Riyadh or Dubai? Because I do have schmoozing skills. Sadly, I’ll never know. 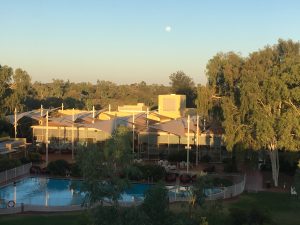 (Sails in the Desert near Uluru in Northern Territories, Australia)

So hotels. I can’t get enough of them, and I realized my fascination with them goes back to November 1998 (a pivotal year, now that I think about it), when Mike and I took a boat ride up to Victoria, British Columbia, and as we got off the boat, I saw Fairmont’s Empress Hotel. We weren’t staying there; we stayed at the Bedford Regency, which also sounded classy and was right on that main thoroughfare, Government Street. But still. The Empress was as regal as its name (and on Government Street). It had opened in 1908, an Edwardian chateau-style party house for passengers of Canadian Pacific’s steamship line, which had a terminal a block away. Canadian Pacific Hotels eventually became Fairmont Hotels and Resorts. If there’s a chain hotel I’m addicted to, Fairmont is the one. One glance at the Empress and I was hooked. I would have afternoon tea and spend a night there two years later.

Since then, I’ve sought out hotels that had character and swimming pools. There are no points programs for going off-brand. One of my favorite hotels is The Roxbury up in the Catskills, which is adding a pool (thank God!). Other favorite hotels are in the fall 2017 issue of National Geographic Traveler, and I recently gushed about this lodge on Australia’s Victorian coast for Flung magazine. I’d love to return to Paris’s Grand Hotel Des Gobelins, which had this majestic staircase, tiny rooms, and this phenomenal breakfast buffet that was served in the bowels of the building (this was 2011, so maybe they changed that). Or go back to the QT in Melbourne where I stayed last November and soaked in another amazing bathtub. Or walk out on to my balcony to listen to the birds before the heat of the day hit at Sails in the Desert Resort near Uluru. I’m eager to try out The Rookery even though I have no immediate plans to return to London. I’ve wanted to check out El Convento in Old San Juan for about a decade. Macau has hotels sprouting up like weeds. Trying out hotels wasn’t something that was encouraged at home or at college: hotels were cheap places with the same non-threatening taupe decor and dentist office art where you crashed for a few nights. Hotels weren’t the vacation. 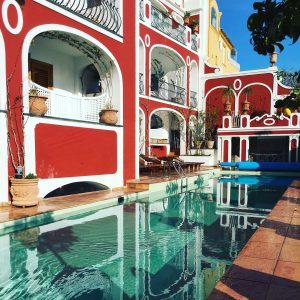 Maybe I still want to blog about travel after all but it’s taking on a new form: waxing poetic about beloved hotels (or scrutinizing them for something annoying, though if I’m there in the first place, it’s because there’s something I like). For some people, the excitement of travel begins when they arrive at the airport or board their train or pack the car. For me, it’s sliding the key into that door and seeing what’s inside. Is this hotel about local history? Is it pretentious? Is it an architectural puzzle? Does it want me to have fun? To relax? To sit up straight and take this place seriously? To forget or admire where I am? To disconnect or reconnect? Does it smell like carpet cleaner or someone’s cigarettes? What’s the view?