I don’t normally use this blog to weigh in on world news or politics. Those things are big and my soapbox here is very, very small. But what happened in Paris last night sent me into a raw, shaking crying spell. I felt a vulnerability I hadn’t felt since living in Washington, D.C. during the 9/11 attacks. Living and working in New York City, we’re used to warnings about terrorist threats, to seeing more police patrol the streets and subway stations and the bridges. It’s not that you forget that you live in a world capital and people would love to make a mess of it, but you do become a bit numb to the red and orange and yellow coding of terrorist threats. If you didn’t, how would you go about doing anything? I was just at a restaurant near SoHo yesterday having lunch with a friend, and if some terrorist wanted to interrupt that, to blow us all up to make a public statement, he or she easily could have because when we’re out and about connecting with others, in restaurants, in concert halls, at sports stadiums, we’re all vulnerable no matter where we live. 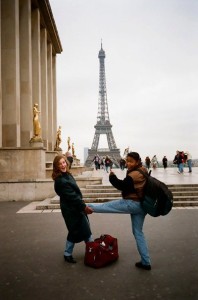 My first visit to Paris was in October 1993 when I was a student spending a semester in London, back when this kind of coordinated, soft-target terrorism we’re seeing now wasn’t yet a sophisticated modality for political expression. The Chunnel had not yet been built. I took a midnight ferry across the English Channel, got tossed about, became incredibly seasick, and arrived to France’s northern coast completely thrilled to be in the country that gave the world brie, champagne and a gorgeous language I was still trying to master. My first sighting of the Eiffel Tower happened during the day. We were looking for it, couldn’t find it, had our noses in maps, then turned around and there it was. For a 20-year-old studying abroad, there was absolutely nothing more exciting. My friend nearly jumped on to me, which is why I’m holding her leg in this photo. We were genuinely beyond giddy to have found Paris. No one was thinking about getting caught in anyone’s crossfire; we were too focused on figuring out how to go up the Eiffel Tower with our luggage because we didn’t want to spend money renting lockers.

I have visited Paris two times since; in 1996, I stayed with a friend who spent a year there teaching and then we returned in 2011 for a whirlwind family weekend of art, cheese and croissants, my daughter’s first introduction to the City of Lights. If I could afford it, I would go there once a year just to replenish my Francophilia.

Traveling can make us forget that the world is not a 24/7 buffet bar, that we can just parachute in and sample whatever we please before moving on. I’m guilty of this. The fact is we’re all tourists, even if we think we’d like to experience a place like a local. If you’re just visiting, there’s no way to fully grasp the socioeconomic and political complexities of a place. And that’s ok. How could anyone come to know such things in such a short amount of time? Yes, most countries depend on tourism to keep their economies afloat, and most countries are happy to welcome you into their homes, serve you their best food, show you the best spots in town, and send you home smiling. Yet, behind the stops to art galleries and towers and river boat tours and cafes, there are tensions, some as old as the stones in the streets. Cities, like people, are layered and complex and difficult to ever truly know. Any trip we take anywhere is just a glossy snapshot.

When I visited my friend in 1996, there were news headlines then about challenges facing Muslims living in Paris. Violence tends to have a history. Tragically, Islamophobia, anti-Semitism, and other forms of racism grip Europe hard. The fear of “Other” is palpable, and the horror and carnage in Paris last night will affect us all for years to come, perhaps even a generation or more. When we visit other countries and see their sites, we should remember the challenges that forged them. We’ll never experience any place like a local no matter how well we speak the language, but we can be more mindful, respectful tourists.