Last year while walking underground through Montreal’s subway tunnels, I became extremely jealous of Canadians. I’ve always liked them but now I suddenly resented them. There, plastered before us while we waited in sub-zero temperatures for our train was a massive ad promoting a sunny beach vacation in Cuba. 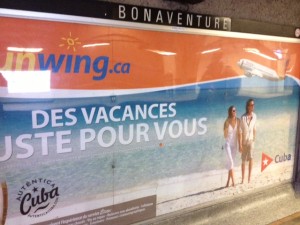 The ad displayed the usual eye-catching tropical hues of blues and oranges and yellows. I wanted to walk right into that poster. I wanted what the Canadians had, the freedom to pack sunscreen, fly directly to Havana, bask on Cuba’s pristine beaches, shimmy to bachata music in the streets of Havana, dine on “Moros y Cristianos” and slippery pork sandwiches, and buy whatever else fancied them without worrying about not having purchase power. 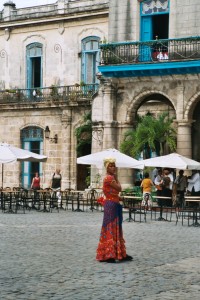 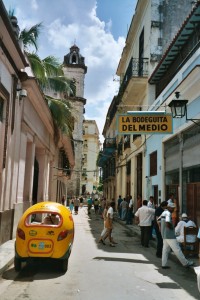 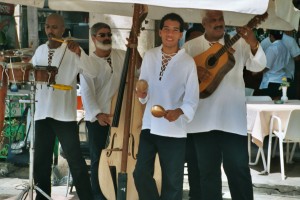 It wasn’t that way when Mike and I went to Cuba in 2003. We flew through Cancun. Our connecting flights on Air Mexicana were purchased in Mexico. We arrived at 1 am in pitch dark. There were Che Guevara posters and murals everywhere. Everyone smiled and no one stamped our passports. Without credit cards or any access to our money, we had to make the cash stashed in our various pockets last the week. No splurging. We counted pennies and mojitos (just one per meal to stay within budget). What we didn’t account for was that the beachfront hotel where we were supposed to stay had gone out of business. Our cab driver, a young sympathetic guy who actually carried a cell phone, took us to another beachfront hotel that cost a bit more. We could swing it, but it would be tight. And it was. But what a week.

What I remember most about Cuba is its unblemished beaches, sand so white and fluffy it looked like fresh snow fall. The water was that distinct Caribbean blue you can’t find anywhere else in the world. This was the cleanest beach I had ever seen and covered with Canadians and Germans sprawled out on towels and blankets. I remember the fully-suited guards surveying the water with their binoculars, strolling the sand. One came up to me to inform me in rapid Spanish to close up my purse. I remember a beach vendor selling Pringles potato chips, that the beer was about $1, that old men really do play chess all day in Havana, that the chicken dishes I ate in Cuba tasted very chewy and stringy, and that the coffee was phenomenal and made me want to pull up a chair next to those abuelos, sip coffee and play chess til the sun went down. 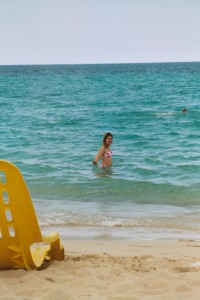 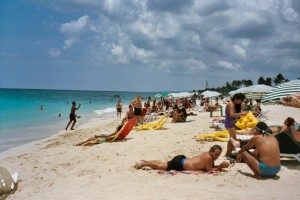 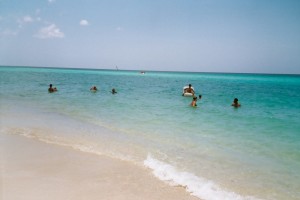 Today’s news from President Obama brought this all back. I never understood this mid-century trade embargo with Cuba and it appears millions of others never did either. We always kept trade going with China despite their human rights record while this bizarre, dysfunctional relationship with an island nation 90 miles from US borders needlessly withered. Meanwhile, the Cubans developed a kind of perseverance and resilience and resourcefulness that can only grow from living without, raising generations of MacGyvers who can readily take a bunch of random objects like a battery, an old toothbrush and a spare tire and make a functioning machine. Seriously, you won’t find a better mechanic on the planet than those tinkering in Cuba.

I want US-Cuba relations to normalize, if that’s the word we’re going to use, but at the same time I don’t want Cuba to become the next Punta Cana pit stop. What will the “new normal” with Cuba look like? Las Vegas in the Caribbean? I was drawn to Cuba while walking around Vienna in 2002; I saw a magazine cover story about Havana’s colonial architecture crumbling. Cuba did not have the money to preserve its own history and its yellowed, cracked buildings were slowly collapsing with age. I traveled to Havana as a journalist the following year because I wanted to see what might not be visible for much longer: 17th century architecture, those 1950s classic cars, streets free of McDonalds and Starbucks. You know how hard it is to travel the world and not trip over an American retailer? I’ve only visited two places so far where I didn’t have American capitalism in my face: Isla Isabela in the Galapagos and Cuba. Cuba is old and beautiful and I want it to stay old and beautiful, though I know that’s an unfair demand. Yet, still I worry about what’s going to happen now. American corporate sugar daddies were just waiting for this moment, for a new generation of leaders to scratch their heads and ask “does anyone recall what we were fighting about?”. Economic prosperity is for everyone everywhere, but I’ll selfishly admit here on the Internet: I hope Cuba says no thanks, or at least doesn’t permit American businesses to overrun what makes Cuba so Cuban.

So how did I leave things with Cuba? Money was squeaky that week, but Mike and I made it back to Mexico with 15 cents to spare. By the time our six days were up, we had just enough money to cover a cheap lunch at the airport, which was a sandwich and an ice cream that we split, plus our airport departure tax for two. I had to pee before boarding, so I went to an airport bathroom and bought some single-ply toilet paper from the attendant because the stalls didn’t provide freebies. Mike thought that was a bit of a binge–that I’ve gone in the woods without toilet paper before–why did I have to blow money on some wipes now? But I just couldn’t fly back to Mexico feeling that way so I gave the attendant the coins I had left in my pocket and she gave me back 15 cents because I had overpaid her. Flushing my last bit of spare change now didn’t feel so hard. We left Cuba with 15 cents between the two of us, which was 15 cents more than what I expected to leave with so I felt like a winner walking out of a casino. About two hours later when we were settled into our hotel at Cancun, we ordered a massive dinner, too many daiquiris and charged it to our credit card. We were back in full capitalistic action with that youthful feeling that anything in the world was ours again if we could afford it. But I admit, feeling broke in Cuba gave me a bit of a thrill. Now with the embargo set to lift, American tourists can buy all the toilet paper in Cuba they want, wiping without worry, but they won’t appreciate it the way we travelers did under the embargo. 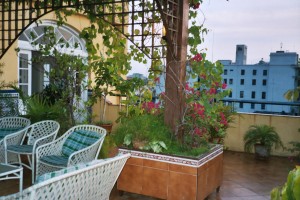 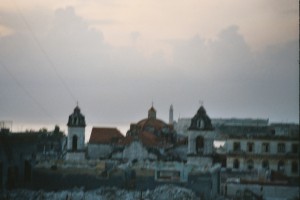