Four weeks ago, we were doing this: 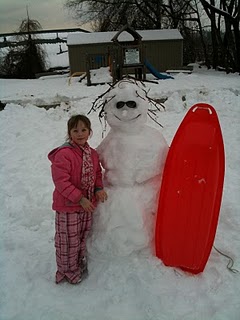 Now, we’re getting ready to do this: 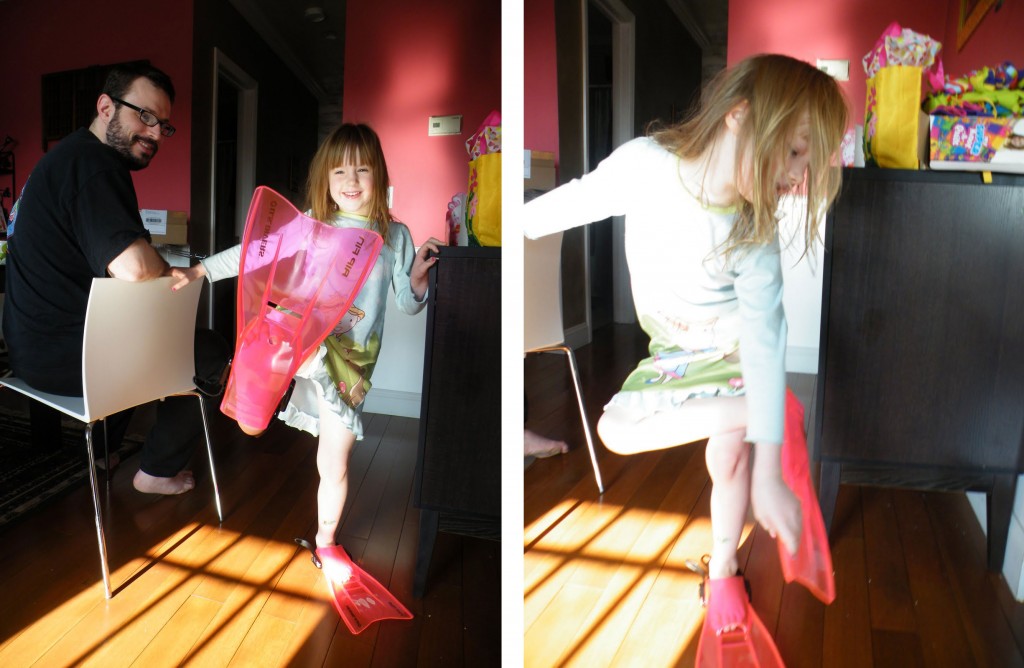 That’s right. Team Martinez-Woznicki is going snorkeling in Key West, Florida, and we leave in just over a week. I cannot wait considering I’ve had this trip on my mind ever since that gloomy, foggy, drippy 40-degree birthday I had last year when I said “Next year, I’m going to spend my birthday swimming with the fishes!” And no, I wasn’t referring to a mafia encounter that would end at the banks of the Hudson River. I wanted rainbow-colored fish swirling around me as I gracefully zigged and zagged my way through a coral reef. The New Jersey Department of Education and I didn’t exactly coordinate our spring break schedules, so we’re hitting the Sunshine State the week after my birthday. That way Anna won’t miss a day of kindergarten. And that’s fine. Like always, New Jersey, I forgive you.

Will Anna actually wear her new pink flippers in the ocean? Hard to say…she’s picky about her shoes. Me? I’m ready to dive in and paddle around in any attire. My first and only snorkeling experience occurred in the Galapagos, a completely breathtaking event that felt like a long clip from a deftly-edited nature documentary. And my first and only trip to Florida took place in 1994 when I was invited to hang with my college roommate’s family at their condo in St. Petersburg. I flew down on my 21st birthday. My first legal public drink took place alone at a bar at Logan Airport. I ordered white zinfandel. Wimpy, I know. I don’t think I’ve touched white zinfandel since.

What are they pouring in Key West? I don’t know, but I’m sure it involves rum. I’ll be reporting from the Florida Keys soon, so stay tuned.

Readers of The New York Times picked New York City as one of the top 5 places to visit in 2010. I’m not sure what this will mean for my commute this year, with more tourists choking the streets and getting the freshest bagels and pizza before I do, but at least I can now prepare. Readers also picked Istanbul (number one), South Korea, Colombia, and Costa Rica. Two of those destinations are on my to-do list (I’ll leave you guessing as to which two).

It’s interesting that New York City was such a favorite choice because we are planning a “Best of NYC” day trip sometime this spring, when 20-degree temperatures like today will feel like a figment of the imagination. There’s no real reason for us doing this other than if we’re going to endure New York’s expense, traffic, and attitude, then we want the fun stuff, too. To be fair, we’ve been doing the fun stuff since we unpacked our boxes six years ago, everything from eating dim sum in Chinatown on a Sunday morning to watching the Thanksgiving Day parade sashay down Broadway to cruising the harbor to see the Statue of Liberty to people-watching at a cafe in Greenwich Village (a fantastic activity on a hot summer day–that’s where I saw the “McGreevey for Fabulous T-shirt in 2004, as in the former NJ governor).

Sometimes New York City’s traffic and attitude drive me to want to head to the hills and barricade myself in a cozy log cabin (nothing too rustic, though). On days like those, I listen to Jay Z’s “Empire State of Mind,” a perfect tune for crossing the George Washington Bridge when the sun is playing peek-a-boo from behind the Empire State Building. (However, I find this song is not as effective on my mood when I’m trapped on the FDR, maybe because the skyline isn’t as dramatic–it’s just me staring at Queens wondering how much longer I need to stare at Queens before I can get home.)

Honestly? New York City is an ideal place to raise a family. The Big Apple is all about overabundance and that holds true for the number, scope, and diversity of its cultural institutions. If there’s a topic of interest, we’ve got a museum about it. Yes, Mayor Bloomberg is trying to knock the flavor out of life here by reprimanding everyone about their salt intake, but this city remains all zest all the time. It’s a great place to enjoy a staycation not because my travel options are limited, but because there are so many options right here in my backyard.

Winter brings out my bicoastal personality. When I lived in Seattle, the anemic winters out there made me mopey, and I would reminisce about being buried by a foot of pristine snow and cocooning inside and baking cookies all afternoon. Nature obliged last night by blanketing the Eastern Seaboard. 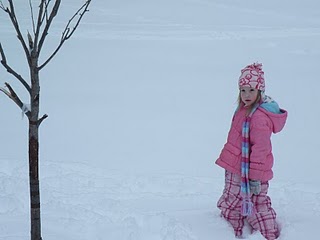 By January, and certainly by February, I am so sick of the bitter cold here and have eaten too many cookies that I am ready to ditch our New York City metropolitan-area lifestyle and set up shop in Los Angeles, where Mike’s company is based. LA is where people jog in their shorts in March and everyone is thin because the sunshine motivates them to stay active and avoid cookies. In LA, you can’t hide underneath five layers of baggy wool. That is the kind of accountability I need. Even Frosty here is checking out his pear-shaped figure thinking he needs to revise his New Year’s resolutions. 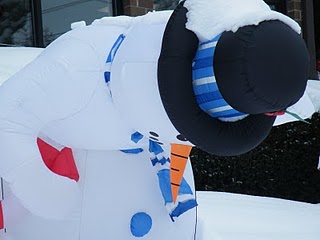 What I want is the Winter Wonderland for Thanksgiving and Christmas, and then after New Year’s, I want the cold to melt and the thermometer to hit 70 degrees. That might be an abrupt transition for some, but I think Northeasterners would grow to like the change. 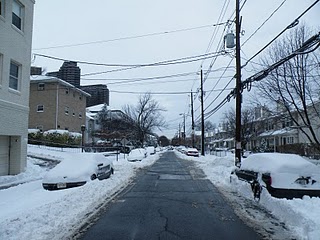 Anna’s artwork, posted in Rockefeller Center, not too far from that tower of a tree. She always draws crazy blonds, but at least the addition of a snowman and candy cane made the sketch look thematic. 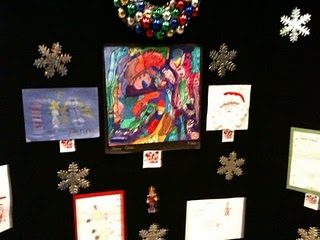 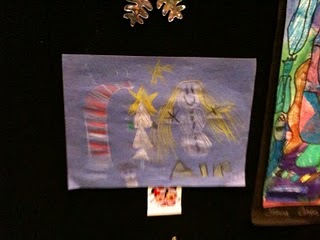 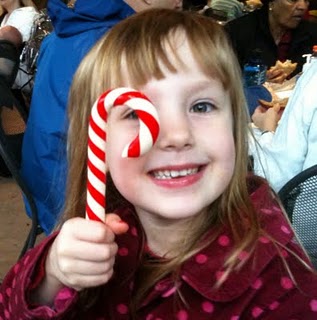 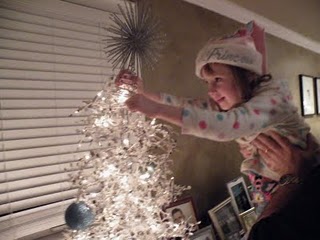 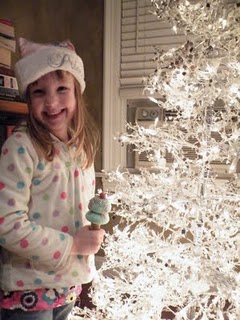 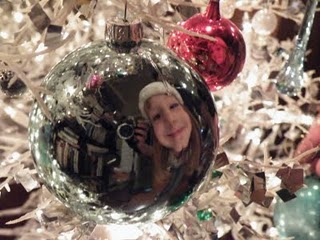