Hiking Rocky Mountain National Park is always a quieting experience. The park marks its 100th anniversary as protected land next year, and although we like to think of our national parks as “timeless treasures,” Rocky Mountain National Park and others like it across America are beginning to show their age. It’s like seeing a friend who’s just gone through a very stressful period; you can see the fatigue around her eyes, a few new lines that weren’t there before. The stress of climate change has done just that to our national parks.

Yesterday, a few not-so-vertical, light hikes in the “family-friendly” areas of Rocky Mountain National Park revealed quite a bit. I was shocked to see the number of fallen trees, and many, though still standing, appeared ashen-faced, ready to fall over with the slightest wind. I last hiked this park in 2011, and didn’t recall seeing so many downed trees. Some had fallen into the water, many crisscrossed one another over the ground. The dead trees looked like vertebrae, backbones of once mighty creatures now growing pale under Colorado’s intense sun. What I was seeing was the impact of the mountain pine beetle, which I had read about in Michael Lanza’s wonderful book “Before They’re Gone: A Family’s Year-Long Quest to Explore America’s Most Endangered National Parks”. Warming temperatures have led to less brutally cold winters in Colorado, giving the gluttonous mountain pine beetle more time to feed on trees. National parks shouldn’t feel like cemeteries. 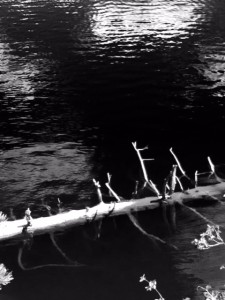 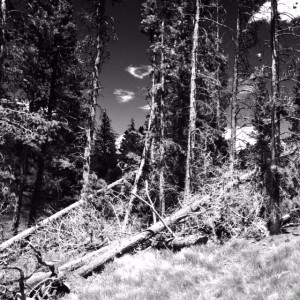 For the past year, I’ve been working on a novel manuscript, which features travel through forested areas of North America and references climate change and the effects of the mountain pine beetle on the landscape. As we all know, it’s one thing to read about what’s going on in the world; it’s another thing entirely to see it. You don’t have to go far into the Rocky Mountains to literally trip over the impact of climate change. Politicians can debate science until their next election, but in the meantime, the trees are in desperate need of some Seussian protection; someone needs to speak for (and act on behalf of) the trees sooner rather than later.

To get ideas for my book-in-progress, I started taking pictures of the fallen trees in color, but then switched to black and white because black and white better captured the starkness of what I was seeing. I started thinking of how I would revise certain passages in my book to more effectively entice the reader to follow in my own footsteps, and while I felt excited for firsthand inspiration, I felt saddened that I was seeing it at all. Again, hiking the Rockies is always a quieting experience, but this was different than past hikes. The majestic mountains still make a hike through Colorado feel like you’re walking through a postcard, but the countenance of the mountains has changed, and why wouldn’t it? Below them, trees continue to fall. Above them, skies continue to warm. So much is changing, yet little is being done. 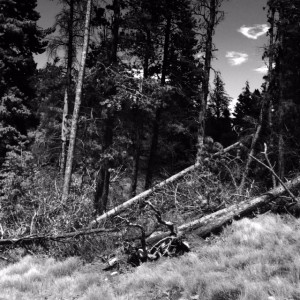 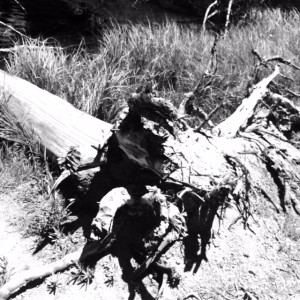 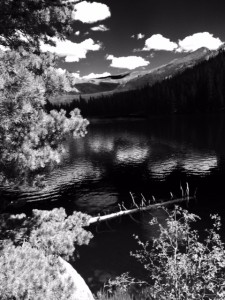