Dominique Browning is right: “souvenir” is a beautiful word and purchases made while traveling are definitely souvenirs, not stuff. “Stuff” sounds exactly like what it is: bulky, awkward, unnecessary. Stuff is what you buy at Target and then pack off to Good Will the following year. Stuff is what you trip over. Souvenirs are stories.

The latest souvenir to enter our home is this decorative metal chicken I bought over the weekend in Provincetown, Massachusetts, that spunky speck of land and the fist in the bicep curl that is Cape Cod. I don’t even really eat chicken, but this chicken now guards our cookbooks, including pages explaining how to best prepare that middle American staple: the boring chicken breast. 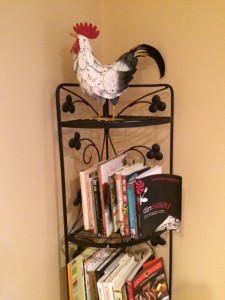 Does it have a story? Well, I’ll always look at this bird and think of that gloomy, cardigan day walking around Provincetown and I’ll remember two things: how delicious the lobster rolls were there and the ticket collector at the pirate museum who spoke so passionately about her own metal chicken collection back at her home in Key West, where living, wild chickens roam free. I’m not about to become a collector of anything, certainly not of metal chickens for I’m sure I paid too much for this stupid thing. I later learned it was made in either China or Indonesia so I was disappointed that I had been tricked into buying something I thought was “artisanal,” a word I’m growing tired of but still use probably more than I should. But there is a story in that too; I thought I was buying something artsy in charming Provincetown only to have been tricked into buying another mass-produced tchotchke from China. Yet I was smitten, plastic was swiped, and now there’s a metal chicken in the dining room that brings back seaside chill and nautical New England as well as naive shopping.

This chicken joins savvier travel purchases that have far more individuality: the antler art I bought in Colorado this summer–as artisanal as you can get with deer parts; my painting from Taos–my second-favorite vacation purchase; my metallic sunflower and pig also from Taos; my Buddha from Montreal; my teapot from Kyoto, Japan; and my favorite souvenir of all, the antique fish knife I bought in London fourteen years ago that later became the knife that sliced through our wedding cake and birthday cakes. And of course there’s a closet full of scarves that represent my globe-trotting.

Oddly, I don’t like it when people give me souvenirs from their trips. Sure, I’ll say “thanks” and do whatever it is I’m supposed to do with the souvenir that was given to me, but this trinket wasn’t my experience–it was theirs. I have no memory of a lovely family vacation with this object; there’s no story to share over that third glass of wine. When I travel, I want to collect stories. Every time I bring out the antique fish knife I purchased in Notting Hill in London, I remember the argument Mike and I had at the Churchill Hills Arm pub next door. We sat under a collection of chamber pots suspended from the ceiling and bickered. We had been engaged for just a few days. Mike, who had just dropped some serious coin on an engagement ring, didn’t want to blow $250 USD on some random fish knife serving set that dated from 1910. The antiques dealer wouldn’t sell me the knife separately, since I wanted that knife for our wedding cake, and Mike thought it was stupid to pay for a fork and knife set when we would only use the knife, which wasn’t even meant to cut cake in the first place. I loved his practicality even then. The more we argued, the more I fell in love with that fish knife. “Think of what a great story this would be for our kids!” I had said. And it was, retold countless times with my version, Mike’s version and the version told by both of us at the same time where our sentences overlapped. Had someone given us that fish knife as a wedding gift it would not have meant as much.

This past weekend, as I browsed shops along Provincetown, I texted Mike to let him know I was wrapping up and would meet up with him and our kid; they were several doors down the street perusing a game shop. I told him I had just bought a metal chicken. He texted back “Of course you did.” We don’t argue about such things anymore. Back in our hotel room, I shared this story with Mike. It’s about a wife who brought home a five-foot metal chicken and left it at the front door for her husband to find. So as I reminded Mike, it could be worse. And besides, Anna has already laid claim to the antlers and chicken to decorate her first apartment, so there will be opportunities to declutter. Sure, she’s in elementary school right now, but she’s already developing an eye for quirky art. One day, she’ll point to those antlers from Colorado or the metal chicken from Massachusetts by way of China, and tell her roommates stories about traveling with her parents. Her roommates will either roll their eyes or nod in agreement that Anna’s mother is indeed one of the coolest people on the planet. And the stories behind these souvenirs will live on.