There’s Orange County, the Southern California beachside haven of three million tawny, manicured people, and then there’s Orange County, a bucolic sanctuary about 60 miles north of Manhattan and home to approximately 372,000 people, many of them pale and wearing ripped jeans and cowboy boots or whatever was on sale at REI. 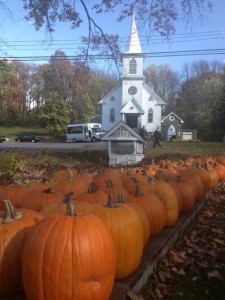 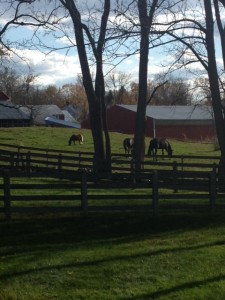 Plenty of urban folks covet rural escape, fantasies that more green and less concrete will make everything okay, and Mike and I are among them. Yesterday was one of those Sunday afternoons in the country that resulted in us perusing real estate websites. But enough about what we might do. Here’s what we did do. 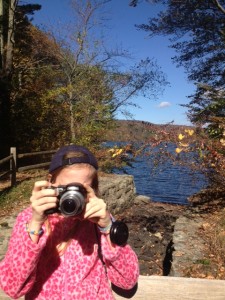 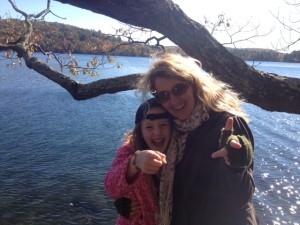 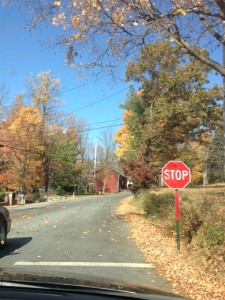 What’s cheaper and more enjoyable than hiking? It’s also an ideal activity after gulping down a large cup of dark French roast. A 45-minute drive from Casa Martinez-Woznicki is New York’s Sterling Forest State Park, nearly 22,000 acres of woods and lake. We caught autumnal foliage towards the tail end of peak season; golden leaves blew and fell along the path, reminding me of our springtime stroll through floating cherry blossoms along the famous Philosospher’s Walk in Kyoto, Japan. My only regret is that our tween pooped out after just two miles of walking, whereas Mike and I would’ve gladly circled Sterling Lake, and sat and listened to the trees rustle until we grew numb with cold. Sterling Forest State Park is kid-friendly, dog-friendly, and elderly-friendly. The visitors’ center is very clean with tons of information, including a giant replica of the park with trail markers that light up. There are a variety of trails to choose from that offer a range of distance and scale. Joggers, dog walkers, folks with walking sticks and little kids were on the trail with us. 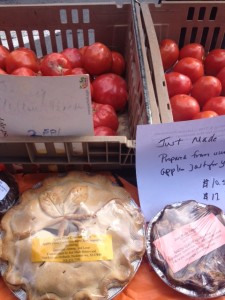 The Warwick Valley Farmers Market runs every Sunday from 9 am to 2 pm, and is a Hudson Valley favorite. We made the mistake of getting there an hour before closing when stalls were clearly picked over. Only four pies left? No mushroom pesto? What do you mean you sold out of aged gouda? That’s right; get there early, when the pies are still steaming and the stacks of pesto and cheeses remain high. There’s live music, and the community makes this a social, weekend thing, so pack some patience because you will need it when searching for a parking space. Vendors sell plenty of eggs, cheeses, produce, breads, meats and wine to fill your refrigerator and dinner plates. You can also buy flowers for a centerpiece to complete the picture of your fine, locally-sourced meal. I bought a bunch of kale for $2 that rivaled the size of our frontyard shrubs. I carried that kale around like a blushing bride. Mike bought an apple pie (because that’s what you do at farmers markets), though the pies are far more expensive than anything you’d get at a supermarket. We did grab some aged gouda and cider, and, damn! those two go really well together. The lady selling homemade mushroom pesto had sold out, but my favorite vendor, Buddha Pesto, had his $9 spreads for sale, so a container of his homemade pesto went straight into our eco-friendly canvas bag. I wish the produce vendors offered more organic fruits and veggies (my kale is not organic and I have mixed feelings about that), and while most of the vendors are very cheery and willing to answer questions, the curt lady selling mushroom pesto was not in the mood the day I swung by. I later looked up this vendor’s profile and learned she is from New Jersey (most of the others are from the Hudson Valley region). Ok. That explains a few things.

There’s a Party in the Apple Orchard 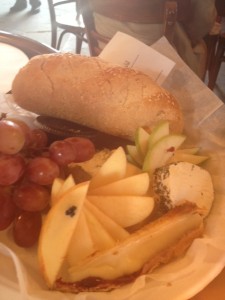 Remember when someone first described Google to you? Or the concept behind the Internet? That’s what yesterday afternoon felt like when we pulled into the Warwick Valley Winery and Distillery and joined about four hundred-plus people rocking it out on the front lawn. Apparently, the Warwick cider house parties every weekend; we figured this out yesterday after living in the area almost a decade. Think Phish concert meets Woodstock meets the biggest picnic you’ve ever been to. We were so naive about this. Mike likes Doc’s Draft Hard Cider (ok, I do, too), and suggested after hiking and $2 kale and pie, we grab some lunch and cider at the Warwick winery, a great idea shared by just about everyone in southern New York and northern New Jersey. First of all, you pay $5 to park, which then makes it “an event.” Once you pull your SUV up the hill next to all the other SUVs, you can then join the party. Every weekend, weather-depending, the winery/cider house hosts live music in front of the cafe from 2 to 5 pm. And the Phish concert analogy wasn’t off the mark; five times a year, the winery also hosts weekend-long music festivals including homages to Bob Dylan, the Allman Brothers, blues, and Johnny Cash. Everyone was wearing cowboy boots or knee-high leather boots, so I was bummed I had worn sensible hiking footwear and had left my utterly impractical red cowboy boots at home. Who knew?

The cafe dishes up plates of cheese, fruit, charcuterie and flatbread pizzas to be washed down with pints of cider or glasses of wine. There was also a barbecue going on outside because the cafe just can’t keep up with demand. Mike stood in line for nearly an hour just to order food. We ate lunch at 3 pm. Everything was delicious and quickly made us forget about the long, annoying wait. Many folks passed the time standing in line while guzzling large, brown bottles of cider, so we’ll remember that tactic for next time. The musicians playing yesterday were a gritty, cowboy rock band called 4 Gun Ridge, and the bald lead singer with the ZZ Top beard and cowboy hat had a great voice. I wanted to take pictures of the band, the cider, the food, but then we would’ve lost the table we had scored. We hate crowds, and yet we had a blast! Alcohol spilling everywhere, loud music, and long lines made me feel 25 again. The hill was covered with people in lawn chairs, blankets, dogs tethered to leashes and picnic spreads that had been rolled out hours before we had arrived. Everyone was laughing. Even the dogs looked relaxed. Folks had clearly settled in that sunny Sunday afternoon. Pick apples, picnic with friends, drink cider, listen to music. What could be better? The sun was getting low, and we were getting cold, so we packed up, but the crowd was still going strong. I’m sure a few people had to be pried off the property after sunset (Doc’s hard cider is 5 percent alcohol by volume, and I doubt people drank just one bottle). Warwick Valley Winery and Distillery was upstate New York at its best; a swath of orchards on a hill facing rolling orange and green and gold countryside; fantastic cider with fantastic food; great music by a small, local band; a topaz sky on one of the last sixty-degree autumn days left when a sweater and scarf are just enough.