On September 12, 1901, when there were maybe just a few hints of fall color touching the Adirondack Mountains, Vice President Theodore Roosevelt went for a hike. Vacationing with his family in his beloved North Country, he decided to climb Mount Marcy, New York State’s tallest peak at just over 5,300 feet. While hiking, some local man named Harrison Hall was trailing Roosevelt, carrying probably the most important piece of paper he’d ever held in his hands—a telegram with news of President McKinley’s life-threatening injuries. The Vice President got down the mountain, boarded a wagon and made it to a railroad station where he inched his way across New York State to get to Buffalo where McKinley had been shot. McKinley died on September 14, and Roosevelt was sworn in as America’s 26th president.

I think of this story every time I’m in the Adirondacks, which is where I spent this past weekend. Why this story? Because I think of how this understated 6.2 million acres of landscape used to attract some of the biggest names and most adventurous people. I mean Theodore Roosevelt chose to spend his down time here, where, 114 years later, I was spending my down time. This got me thinking how the Adirondacks’ timelessness appears indefatigable despite forest fires, global warming, and industrialization. Thirty-one years after Roosevelt became president, Lake Placid, the region’s biggest hub, hosted the Winter Olympics in 1932 and did such a good job hosting that they got the gig again in 1980, drawing some of the world’s best athletes to this tiny town surrounded by blue peaks. The area, once known for back country lumberjacks and rural poverty, was now under the global spotlight entertaining some of the best of the best who had crossed sea and sky to reach this place. Today, the Olympic Games tend to go to bigger places with bigger budgets, and presidents vacation in luxurious locales like Martha’s Vineyard and Hawaii. The Adirondacks is not Aspen or Jackson Hole; there are some four-star accommodations and awesome eats, but it’s still mountain country where grizzly guys are out in the open driving their rusting pick-ups. Outside of the American Northeast, people have heard of the Rockies and the Ozarks and maybe even the Smoky Mountains and the Olympic Range, but few people seem to recall the Adirondacks unless you specifically say “Lake Placid, where the U.S. hockey team beat the Soviet Union” and then you get a nod of recognition. 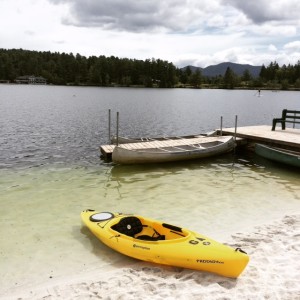 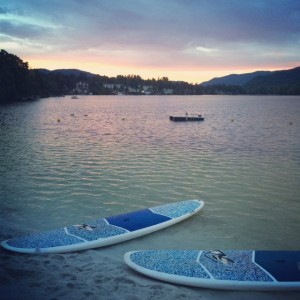 On the ground, Lake Placid obviously looks quite different than it did during Roosevelt’s visits or even the 1980 Olympic Games. Towns, like lakes and mountains, are their own ecosystems, always evolving and adapting, as they should. But while kayaking alone on Mirror Lake yesterday morning, I looked around the mountains and sky reflecting off the water’s surface, Mirror Lake living up to its name, and thought of how much nature still manages to move us even while we’re all IV’ed to our smartphones. The buildings and roads in between the Adirondacks’ peaks and valleys change, but the impact the region has on those who live here and visit has not. There are still many, many places throughout the Adirondacks where you can’t get any cell service, and as long as there’s no emergency, this feels like a wonderful thing. To kayak alone on a serene lake without my iPhone on me, to be out there early enough before all the paddleboarders and boaters woke up, and to feel like I had the sky and lake and mountains all to myself, was intoxicating. And I imagined this was the pull that Theodore Roosevelt felt when he hiked Mount Marcy nearby. Maybe, like me, he thought “This is mine,” even though we knew otherwise.

There are countless beautiful places on this earth—the Adirondacks and Mirror Lake being among them—and it’s getting harder to keep them beautiful. Lesser-known corners of our planet struggle to hide from capitalism, climate change and population growth. Globalization means just that, where everyone’s backyards are connected even if it doesn’t feel so. When I kayaked across Mirror Lake, I thought “How much longer?” The state-protected Adirondack Park is home to 3,000 lakes and ponds and 30,000 miles of streams and rivers, including the birthplace of the Hudson River; Mirror Lake is shockingly pristine compared with some of the others. Powered boats aren’t permitted and no one is dumping cow shit into it unlike the farms surrounding nearby Lake Champlain, the almost-sixth Great Lake that divides New York and Vermont (equally stunning though not as clean as it could be). The clarity of Mirror Lake’s shoreline sometimes reminded me of the Caribbean. Yet the area deals with salt contamination due to aggressive salt use as part of winter road maintenance. Folks there shovel more than 100 inches of snow per year; 86 percent of salt and chloride buildup has been directly attributed to road salting to help keep roads as dry as possible. Pollution comes from neighbors, too: many of the Adirondacks’ lakes suffered depletion due to acid rain as a result of wind patterns mixing with Midwest plant emissions.

Thankfully, there are already signs of ecological recovery, for mountain folk are fiercely protective types. Because of their efforts, we had a gorgeous, lazy day on a pretty clean lake Sunday. No floating garbage. No slimy muck pooling at our feet. Locals and tourists apparently playing by the rules. I’m so grateful for this region and miss it the moment we leave. It’s a side of the American Northeast people don’t think of; our colonial history and that stress-junkie lifestyle that defines the Boston to New York to Washington, DC, corridor often overshadows the quiet, mountain interior that appealed to Roosevelt. But it’s still there, and if you have the chance, go and experience it before it changes into something I wouldn’t recognize. 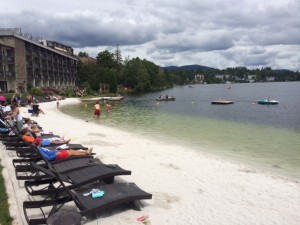 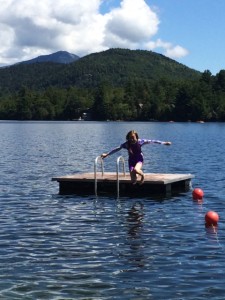 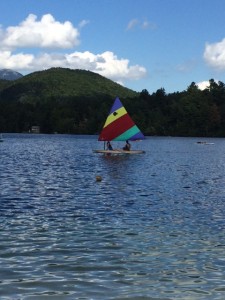 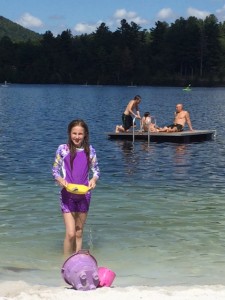