Savannah’s kitchens were humming long before Paula Deen arrived, and, like the ghosts said to haunt the land there, these kitchens will continue to crackle and hum for centuries to come. There’s so much to taste and try in Savannah, so leave Paula Deen to the Food Network and simply sample your way across town. Low country boasts the unapologetically hearty low country boil, but the region’s cooks are just as skilled in satisfying a sweet tooth. 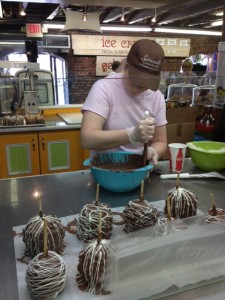 My trip to this port town was a reunion with college friends, one of whom is a Savannah College of Art and Design graduate. We had visited her in spring 1999 and decided to circle back and check out Savannah’s 21st century revitalization, for much had changed in the past decade. I’m not entirely sure how the economic downturn affected Savannah, but the area was sprouting new businesses on every corner where we walked, new restaurants, new shops, new art galleries, many of which appeared to have opened in the past decade, one even in the past few weeks.

And that is what I captured on camera, not the cemeteries and gardens I had intended to photograph but shops, cafes and store front windows where guys and gals wearing hair nets and vintage aprons spun sugar and revved up the community for Halloween. My trip was cut short due to Hurricane Sandy. This was the second time one of our vacations was affected by an East Coast storm and resulted in a long road trip. The day I was supposed to visit historic cemeteries and gardens and parks, the one sunny day we had in Savannah, my flight was cancelled and New York City was shutting down airports and train stations in preparation for what proved to be a brutal storm. This time last week, I was in a rental car cruising across the Carolina borders questioning whether it was wrong to pull over to a Le Creuset outlet store on Interstate 95 while my husband and daughter braced for a hurricane (it was). As I approached the New York skyline, I passed a fleet of utility trucks and ambulances, dozens of them. New York was getting ready for a wallop. Eight hundred and fifteen miles later (I didn’t even have to turn, just stayed I-95 the whole way), I pulled into my driveway at 11:40 pm Sunday, full of McDonald’s snack wraps and classic rock favorites after hours of local radio. The drive took 13 hours and I stopped for bathroom and gas breaks four times. Hurricane Sandy arrived in full force the following afternoon.

So back to my almost-48-hours-in-Savannah. I captured what I could. We were there the weekend before Halloween; Savannah was in full regalia party mode with middle-aged men wearing kilts with a T-shirt that said “Spank Me” and twenty somethings outfitted in either very clever, colorful, coordinated costumes or whatever was lying around the closet floor that night. There were jack o’lanterns, ghosts, and skeletons dressed to impress, for Savannah is the second most haunted city in America (New Orleans is the first) and Halloween is the city’s new year, when living and dead rock it out arm-in-arm til dawn. 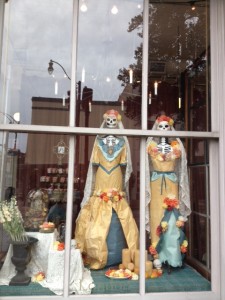 I’m not waxing poetic here, I do think Savannah is haunted. The city is alive with life and death, its history both faded and vivid for the two are now too intertwined to survive without the other. Folks at restaurants we went to knew national television ghost hunters by name, as if they were regulars at the bar. Every one had seen something, heard something, or saw something. I admit, during our ghost tour carriage ride, I didn’t like it when our carriage stopped. Houses, lit and darkened, watched us with narrowed eyes. Many of the ghost stories were domestic disputes that went too far, and I wondered if every married couple in 18th century Savannah argued at knife point instead of the subtitled, seething bickering we’re all used to now. Did humidity drive people mad? New York may be the city that never sleeps but Savannah is that city that never rests. Such spookiness called for comfort food.

And that’s where spun sugar comes back in. Walking through downtown Savannah, along the river front, through Savannah City Market, or just down some random street, someone somewhere handed out candy. Taffy was being pulled. Pralines were being stirred. Peanut brittle was being chopped. Caramel was being drizzled. Walk into Savannah Candy Kitchen, someone hands you a warm chunk of chewy, nutty, praline. Didn’t buy anything at the store? No worries. As you walk out, that same person will robotically place another warm chunk of chewy, nutty praline in your hand again. In the shop, free sample, out of the shop, free sample, on to the next shop, more free samples. This is how it went Saturday afternoon. 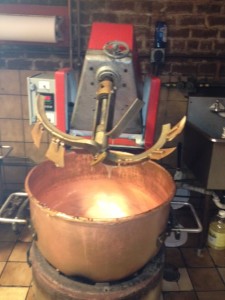 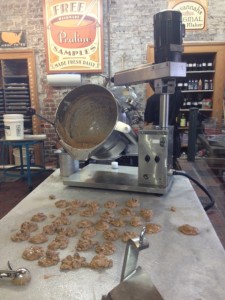 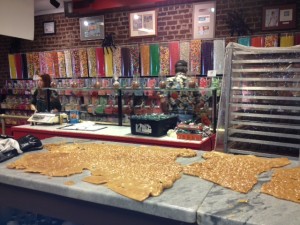 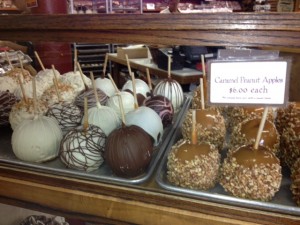 Down the street from Savannah Candy Kitchen, the Savannah Bee Company–a new business that opened its doors in 2002–also offered free samples, which were paired with cheese and sliced apples. Beekeeping is big business in the American South. I sampled the Tupelo and Winter White honeys, and honestly would have lapped up any fallen drops of honey off the floor because it was that good. Savannah Bee Company sold all of its varieties in TSA-friendly three-ounce jars, so I got a jump on some holiday shopping and loaded up (turned out I didn’t have to worry about flying home). 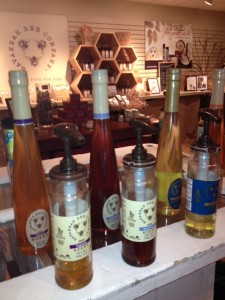 Buzzed on sugar, I needed more. So we strolled to Sweet Carolina Cupcakes, a very new business that just opened in September, and exercising restraint, split two cupcakes–a Whoopie Pie and a Sweet Georgia Brown–among the four of us. 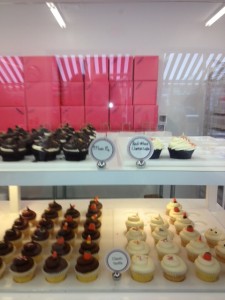 And this was how I left Savannah, full, wired, and a bit fuzzy on what had just happened over the weekend (probably the claim of every SCAD student every Monday morning). I woke up Sunday morning last week camera-ready for a walk along Spanish moss and marble statues and ornate fountains. I wanted to capture the pristine stillness of angelic faces staring off at the heavens because my 1999 hard copies of these graves are lost in a box somewhere. And yet I was balancing a hot cup of coffee while steering a minivan north, nibbling on a praline left on my pillow the night before by the hotel maid.