I use the word “party” loosely. I couldn’t hold my drink then and I can’t hold it now. While sunbathing in my SPF-50 long-sleeved rashguard on Siesta Key, I barely drank my daiquiri, some ruby-colored concoction that melted the second it was made (I’m discovering I’m a high-end tequila gal, anyway). Everyone else looked leathery and was gulping down what looked like cheap beer or neon-colored drinks like mine. On the beach, I scuttled toward any bit of shade, like some frightened crab eager for protection. I’m not getting any younger, and have somehow remained wrinkle-free, like some freshly laundered white Oxford shirt. In fact, I received a few compliments on my clear complexion while visiting Florida last week and at first, I thought “What the hell? Are the labels on my overpriced skin care products actually true?” Then I looked around at all the raisins in the sun. 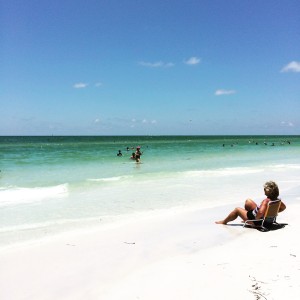 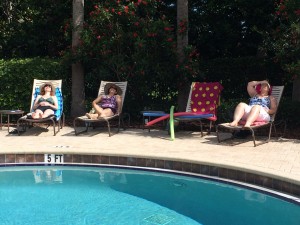 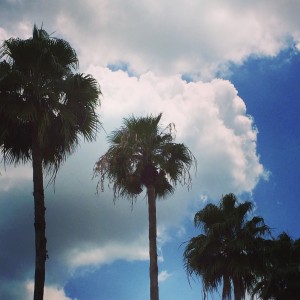 So what brought me to Bradenton, Florida? Me and my mates from college try to meet up every few years to just hang and reconnect. Without planning for it, this trip fell almost exactly 20 years after our college graduation. Our last jaunt was to Savannah, Georgia, in 2012, so it was good to get everyone together again; our chemistry as a group is something I’d snort and sell because it’s so special. Come to think of it, we meet up in the Southeast frequently and I have no idea why. We’ve met up in Savannah twice and New Orleans twice. One year, they threw me a bridal shower in New Orleans’ delightfully spectral French Quarter, a fantastic time in which I received far too many skimpy pieces of lingerie, drank lemonade that could trigger diabetes, and danced with an eighty-something-year-old man who had some serious sweet moves.

Now we’re all a decade or more into marriages and mortgages, some of us have kids and menageries of pets, some of us are already talking early retirement, because, Holy Crap! the mid-fifties are closer than we care to acknowledge. We’re scattered across the United States, one in Los Angeles, one in Kansas City, one in Washington, DC, one in my hometown of Rochester, NY, and then me. This past winter we were all bitching about the cold, Florida came up in the conversation, and one of us mentioned her mom’s friend’s place in Bradenton where this friend’s mom’s friend snowbirds with her husband. My advice to you, at any age: when a friend’s mom’s friend says “Hey, I’ve got a house in Florida you can use!” you show up. No matter where it is. Just go.

For four days, we hung out in a house about twice as big as mine and purchased at less than half the price because everything is bigger and cheaper outside the New York City region. I was grateful the house wasn’t decorated in the aquamarine-seashell kitsch I expect of Florida. I sipped morning coffee on a lanai—a word I never get to use in the Northeast—while watching lizards dart everywhere. We affectionately referred to the area as “Del Boca Vista” (a Seinfeld reference for those of you who came of age after 1998). Next to the visiting grandchildren, we were indeed the youngest in the ‘hood. The best perk—besides being almost free—was that the house stood just feet away from a beautiful, inground pool—a Florida backyard staple—where the water temperature never dropped below 80. Every day, my friends and I sat in the pool until our skin pruned. The pool was where we chatted bluntly for hours about everything under that unforgiving Florida sun because that’s what you can do with friends who have known you since you were 18; you can say anything, anytime. That’s why we do these trips.

I’ve always been sensitive to my environment, and was worried Florida would get under my skin and make me feel old before my time. The exact opposite happened. If anything, hanging with my college friends made me feel 20 again. We blasted the Gin Blossoms in the car. We gossiped. We compared notes on sex. No one counted calories because no one cared.

Which made driving around Bradenton a little weird because the town, like the rest of Florida, had its fair share of funeral homes, and since I was the one skipping the second daiquiri to drive three forty-something women around town, I noticed these things.

But the area surprised me, too. We encountered Loggerhead turtle eggs on the beach. I ate fish tacos that were almost as good as the ones I ate in Mexico. We visited Bradenton’s quirky, thriving arts community where we bought the same kind of funky jewelry we used to buy 20 years ago. It wasn’t all Winn-Dixies and funeral homes; there was a heartbeat in Bradenton that was still going strong. The Del Boca Vistas in America may be cookie-cutter, but they haven’t flatlined. In fact, they’re oddly rejuvenating. 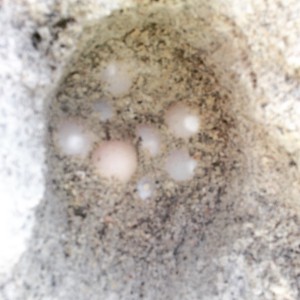 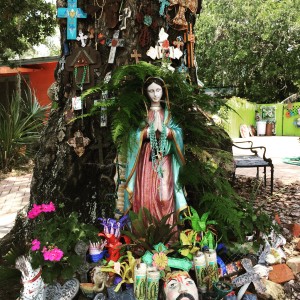 By the time I boarded my flight home, I realized I’d had a Doctor Who moment. Yes, Florida is strange—the crazy aunt of the Continental 48, as someone once said—but I had enjoyed time travel. While in Bradenton with my college friends, I got to revisit the old me, which is still vocal, chugging along, and dropping a few too many f-bombs, but is also occasionally overshadowed by the forty-something stuff, which is to be expected. We can’t be 20 forever. Yet it was fun to fly alone. I wore artsy jewelry and bought a $12 dress at some secondhand shop (though I think the term is “upcycled” now). I didn’t feel like a suburban hausfrau. I went four days without talking to a neighbor about school districts, property taxes or who has what disease (their favorite topics, not mine; I’d rather talk about books, but no one in my zip code reads for pleasure). I was just Kate, the blonde woman blessed with good skin tone who always loved to travel but hated to fly, the girl who never could hold her liquor, the one working on a novel, listening to the Gin Blossoms. 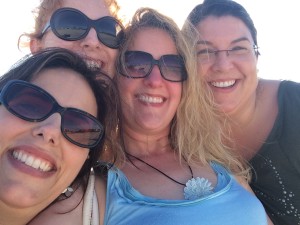