Camping is the ultimate form of budget travel. You can’t get any cheaper than squatting in dirt stooped over a campfire eating something you probably would never have ordered in a restaurant (unless you’re an adventurous gourmet camper, and I’m just not there yet). 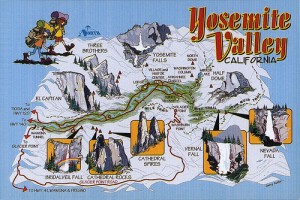 It’s been a few years since I’ve braved the Great Outdoors, but my daughter is older and lately I’ve been hankering to give camping another go. I have an odd ambivalence toward camping that began May 1999 when I camped in Orick, California, which should have been a breathtaking experience had sand not been blowing up my nose while bears lurked yonder waiting for me to doze off so they could steal our S’mores.

What rekindled the interest was our recent trip to Colorado and hearing about scalpers snatching up campsite reservations at Yosemite. Yosemite National Park gets two million visitors every year, which made me think I’m missing something by not being among them.

I’d love to add Yosemite to my camping oeuvre. It’s the real deal and seems like a must for campers and camper wannabes. Here’s where I’ve pitched a tent and stooped over a campfire:

— August 1993, Brown Tract Pond, Adirondack Mountains (camped with two guys who both played guitars; very granola)
— August 1994, Acadia National Park in Maine (had a great time and ate plenty of blueberry pie!)
— May 1999, Orick, California (did not have a good time and sold our tent once we got home to ensure that camping never, ever happened again)
— June 2002, Assateague Island, Maryland (decided to give camping another try; had a good time on the beach and enjoyed watching the wild horses roam)
— October 2002, Shenandoah Valley, Virginia (thought autumnal camping might be more fun and romantic, and it started out that way until nighttime temperatures dropped into the 30s and we froze our butts off)
— July 2003, Assateague Island, Maryland (attempted to repeat our wonderful weekend from the previous year and failed; Mike was consumed by mosquitoes and it stormed, causing our tent to collapse in the middle of the night)

Then Anna was born in 2004. So as you can see, it’s been a while since I camped. When Anna hiked Rocky Mountain National Park last month, she decided she wanted to get closer to nature, sleep under the stars and ponder the wonders that make up our world. Why leave the park before sunset when you can pitch a plastic trapezoid into the earth and huddle inside it through the night? So we’re thinking about it. If anyone has any camping recommendations, we’re open to ideas. We don’t own any gear any more (because I sold it out of anger…it’s true), but allegedly there’s a mystery tent in our house. We don’t know if someone gave it to us, left it to us or if we were weak and bought a tent at some point, truly believing that camping would be part of our lives again.