During a morning walk in suburban Florida this week, I passed this pile of discarded plastic flamingos on a lawn that looked cared for but not really used, and I couldn’t help but think about the American dream as we approach the inauguration of the next president. America is going through some funky, disturbing times. There is a sense of mourning among many, and yet, also around the corner from my rented house here in Cape Coral, Florida, a Trump/Pence sign, so not everyone is mourning. Also on my walk, a young guy greeting me “good morning” while holding a rifle in each hand, manatee-shaped mailboxes, and upright pink plastic flamingos adorning lawns filled with plastic candy canes and inflatable polar bears. 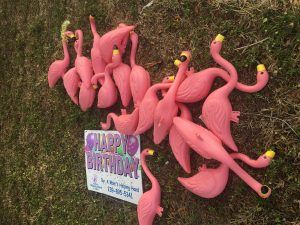 Honestly, as I hang out in Florida, I’m in shock that I’m still in the same country that is also home to Portland, Oregon, and to Chicago and to Shamrock, Texas (had a layover there back in 1998), and to New York City, my backyard for the last 13 years. The fact we’re still a union at all answering to the same red, white and blue flag stuns me, and we should consider this progress even though there’s so much vitriol and bipolarity and -isms right now. We are 50 *very* different states. I celebrated my first birthday in Texas; I grew up in upstate New York; I lived in Seattle, then moved to Washington, D.C. (not a state, I know). I got married in Vermont. I have driven the width of the Contiguous 48 three times. I have visited 30-plus of America’s diverse states—haven’t yet visited Alaska or Hawaii—and each state functions as their own little universe. I lived in New Hampshire for six months about 20 years ago. New Hampshire, despite a shared geography with Vermont, has a completely different mindset from the Green Mountain State; it’s like comparing New Mexico with Arizona, or North Carolina to South Carolina, two states that still cannot agree on the proper way to serve barbecue. Despite shared borders, these are not apple-to-apple comparisons by any stretch. Why is that? Why do things change so much when you cross borders drawn by dead white guys?

It’s easy to happily function inside your bubble, mingle among like-minded people, never go beyond your borders, but I like going to other people’s bubbles, even if we disagree on who should lead America or the Second Amendment or the nutritional value of almond milk. America is just that, a string of bubbles, and communities feel increasingly less inclined to Venn-diagram with one another. Someone looked surprised when I mentioned I wasn’t going to unfriend Trump voters. I even had brunch a few weeks ago with a staunch Republican, who is a dear friend of mine. Our bubbles overlapped over eggs and Bellinis.

I’ve been fascinated by regionalism and differences long before Trump shocked millions of us by winning the electoral vote. To answer my own query, I started reading Lewis and Clark’s journal entries earlier this year, trying to picture what America looked like before being claimed, parceled and mapped out, before Texas was briefly its own Republic, before Abraham Lincoln had to fight to keep the country from ripping itself apart, before Los Angeles turned into Tinsel Town, before Wal-Mart took over the landscape, before “coastal elitism” became a term. Lewis spends several—and I do mean several—pages lamenting about the morning fog slowing things down, perhaps not thinking that two centuries later, a 40-something suburban mom who hates America’s ubiquitous malls and themed parks would be scanning his words for clues. Entries are spelled out phonetically, so it’s not smooth, intuitive reading; his meditations about what America used to be require stepping away from the puzzle pieces to see the bigger picture. And I’m still not sure on the answers, on when all these political, social and cultural tectonic shifts began, or where they’re going, and maybe these changes are harder to gauge because these movements are still moving.

Had America not been so goddamn big, had Sacagawea said to Lewis and Clark: “Find your own way! Jean Baptiste needs his nap!” or had Napoleon not needed to sell off “Louisiana,” which constitutes most of middle America, to fund his warmongering, what would America look like now? Who would be assuming power in four weeks? Where would the red and blue states be? Is there a singular American culture anymore or are there many American cultures? Those who drink their coffee with soy-free almond milk versus those who prefer whole milk from cows that grazed on pesticide-treated grass, and everyone else in between? Who is America today?

These “what if’s” are folly, as all “what if’s” are. Regionalisms will always prevail, no matter how much the Internet attempts to globalize us. As I write this, I am playing George Michael’s 1990 album “Listen Without Prejudice Vol. 1,” a thoughtful, moody album about working out our differences, finding some common ground, and breaking free from the shoulds, coulds, and woulds. I keep replaying “Cowboys and Angels” a wispy, jazzy tune that feels like clouds floating by—perfect for a lazy day in Gulf Coast Florida. The day after tomorrow, I will be in a car with my husband and tween, driving about 800-plus miles back north, dreading the Northeast’s go-go-go attitude, its cold and darkness, missing clouds and sunshine and plastic flamingos and swimming pools surrounded by chintzy Christmas decor. All these things are closer than I realize, they appear not so far when I look at a map, yet when I am back in suburban New York City in just a few days, these things might as well be on the moon. We will cross seven states to return to New Jersey, a state that I thought would only be a pit stop, that after 13 years of keeping a residence there, still doesn’t feel like home. And as I pass through each state, I’ll be wondering who America is becoming, where are we going? And will we all get there together?

Am I the only traveling American who doesn’t want to start her day with a plate of eggs, bacon and gluten bombs? While venturing around the Adirondacks and Vermont these last few weekends, I couldn’t help but notice all the pot-bellied families around me at hotel restaurants and diners eating their high-cholesterol breakfasts. I don’t mean to sound snobby, but America, we’re big. Too big. And I think it’s unfortunate that you have to find a vegan cafe or a five-star hotel to get a breakfast on the road that’s anything besides eggs, bacon and gluten bombs. I don’t expect the world to accommodate gluten-free eating, but isn’t variety the spice of life? Couldn’t the Crowne Plaza in Lake Placid–a pretty nice place with a kickin’ view of Mirror Lake–offer more at its breakfast buffet besides what you can find at a roadside diner? Mirror Lake Inn had the usual American breakfast fare, but there was also a plate of smoked salmon every morning, a feature reminiscent of my mornings at the Park Hyatt Tokyo. Just one, preferably gluten-free, outside-of-the-box dish in the morning, America. Just one. That’s all I ask. 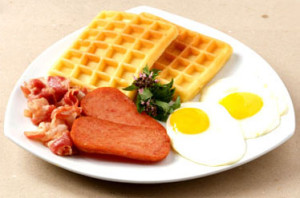 (What you are served most mornings at most American hotels)

Hotels are run by companies, and companies cater to the lowest common denominator because the lowest common denominator makes them a lot of money. Nothin’ wrong with that. We’re a capitalist society. But what about eggs, bacon, gluten bombs AND a plate of smoked salmon or other fish? Or some gluten-free rice cakes, for I am not the only gluten-free traveler out there? Or what about some freshly sliced avocado, full of monounsaturated fats, which actually help lower cholesterol? You know how many people eat fish and rice for breakfast? Millions. Yes, they probably don’t outnumber those traveling along Interstate 40 or munching on egg McMuffins at Newark airport, but they’re out there, craving something different, something better for breakfast, just like me.

You might argue, “Hey, the Adirondacks isn’t where you go for fish and rice. That’s mountain country where flapjack stacks touch the clouds,” and I would reckon you are absolutely correct. The flapjack is a likely descendant of cornmeal cakes, which were the popular pioneer breakfast back when corn was not the bastardized, pesticide-resistant plant that’s now found in everything from fruit juice to salad dressing. I’m not saying eradicate flapjack stacks. And I’ll admit here on the Internet I occasionally eat a piece of bacon. And I’m not saying eradicate grains. America is the land of corn and wheat. But on either side of those massive fields of corn and wheat lie two oceans, so dangnammit, can’t hotels and establishments serving travelers think beyond the middle? The only gluten-free option shouldn’t be that abandoned bowl of browning bananas and mushy apples.

And you might also argue, “Hey, eggs and meat and dairy are on most people’s plates most mornings all around the world,” and you’d be correct, there, too. Check out how folks start their day. The human race has plenty of disagreements, but when it comes to breakfast, there’s vast common ground: we all seem to need a little caffeine kick every morning, and we like our breads and spreads alongside all kinds of things that come from farms. Those are some global breakfast staples.

When I’m in England, I enjoy the traditional English breakfast of eggs, bacon, beans, mushrooms, and that ubiquitous slice of tomato. Yum. Though I can’t eat that every day. Like the American breakfast, it is too heavy.

In France, I’m now having a tougher time because the French breakfast is coffee and croissants (and usually a cigarette), and gluten-free hasn’t taken off in pâtisserie country. Yet.

In Iceland, I had fabulous breakfasts of smoked salmon, skyr and shots of cod liver oil.

Eating breakfast in Mexico was a treat because I lived off corn tortillas, rice, beans, guacamole and eggs–all gluten free.

Japan offered “Western” breakfasts alongside their traditional breakfasts, and I gotta say, little servings of fish, rice and miso soup ain’t a bad way to start a day. I haven’t been to India yet, but I think the country’s lentil cakes served with rice, chutney and sambar would suit me just fine. 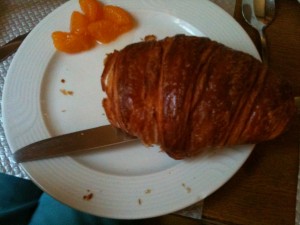 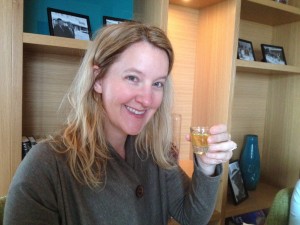 Hotels mirror the culture, and one of the biggest elements of culture is food. Every time a Best Western or Holiday Inn or an InterContinental unveils another plate of eggs, bacon and toast to a guest, it says something about America. To me, it says we lack self-discipline and can’t think creatively. The United States is a melting pot, where Hispanics and Asians are two of the fastest-growing ethnic groups. Why can’t our breakfasts reflect that? Why can’t our hotels be better examples of who we are and what we eat? I challenge Starwood and InterContinental and all the other hotels chains out there as well as the independently-owned bed-and-breakfasts from the tip of Maine to the Hawaiian islands to get imaginative with breakfast. Ok, it doesn’t have to be low-fat, low-carb healthy. Like I said, I’m guilty of occasionally enjoying a slice of bacon. But can’t hotels and what they put on our breakfast plates reflect the diversity America loves to brag about? Can’t we be more than the same-old, same-old? Can we not be the Denny’s Grand Slam?