Outside, the Tyrrhenian Sea had disappeared into darkness. I could see this from my seat at the dinner table; one side of the restaurant was all windows looking out, but at the moment, there wasn’t anything to see except specks of light coming from neighbors’ windows. Nightfall in Positano, on Italy’s Amalfi Coast, is at all not like nightfall in suburban New York City—it’s a true, deep, inky dark, not that hazy, pink dark that clouds Manhattan and all its neighbors from sundown til sunrise, giving you the false sense the sun never slipped away at all, it simply changed colors. We were enveloped by the blackness curling around the coastline while inside the restaurant, hundreds of candles glowed, what felt like the safest place to be on Earth that night. At the table next to me, a woman from Texas, a writer who now owns an artisanal wine and spirits shop in Los Angeles, stood up, and in her soft Southern drawl, delivered an impromptu buzzed speech about the importance of writing, the commitment to the process. She then raised her glass and said loudly and passionately “Fuck money!”

Cheers and applause followed. She was speaking to a restaurant filled with writers, some published, some not, some quite notable, and others who were trying to carve a name for themselves, like myself. And it was easy then, just two weeks ago today, to lift my glass and chirp “Fuck money!” in response. I was surrounded by supportive peers at a five-star hotel for a writers’ conference. I was someplace ancient and magical. I had redeemed frequent flyer miles to get there, and had flown business class for the first time in my life just to make the claustrophobia I feel on planes more tolerable. I couldn’t really afford the event, but I was there. “It’s an investment in your writing,” my husband said in the months leading up to the conference, and there I was saying “Fuck money!” 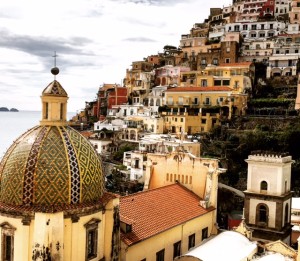 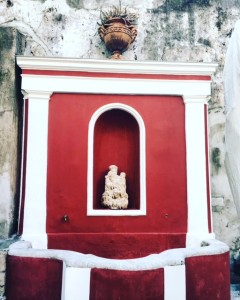 Most writers I know don’t earn much. The US Department of Labor says that in 2014, writers averaged about $58,000 per year. I’ve been on both sides of that figure in the last few years. My husband just finished edits on his fourth book, and tells anyone who asks—and it’s been asked several times—that he will never leave his day job as a writer for a mutual fund company. He loves what he does, and the company he does it for, and his job has changed our lives in ways we never thought manageable, allowing me to leave my office gig four years ago and return to full-time freelance writing and, more importantly, return to creative writing, something I hadn’t touched since college.

Three days after that candlelit toast, I was happy to be back home after 12 days in Europe, though, truthfully, I would’ve much preferred my family to fly out to Italy to be with me. I have no love for New York City. It’s the financial capital of America, and this toiling for coin dominates life here. In my leafy, snobby suburb, it is assumed everyone has a ton of money. I did not grow up with middle class comforts, yet years of working hard, paying off debt, and job promotions led us to a town of bankers, lawyers, dentists, doctors, human resource managers, engineers, and one neighbor who is a senior administrator for the United Nations. It’s a town of 60-hour work weeks and big paychecks. It is not a town where freelance writers live. But we were able to afford a small, aging house here because it offered the best education for our daughter, and an opportunity to build equity quickly, for houses in this town sell well. At home, busy not fitting in, I try to think of living here like I think of the conference in Positano or my writing in general, an investment. And investments are about time.

Meanwhile bills roll in, and the stress of not getting paid kicked in as soon as the jet lag wore off. I spent my first week home following up with clients, a daily constitution for most freelance writers I know. When I wasn’t doing that, I worried, which I’m very good at. There are often financial dry spells when working as a freelance writer, but it was difficult to have it follow such a luxurious week. Just days earlier, I sat inside a dreamy hotel sipping luscious red wine, nibbling on tuna carpaccio and talking with a Canadian writer about the restaurants down by the beach. Difficult clients, ignored emails, piling bills, and the snobbery of an overpriced, award-winning school district community were all four-thousand miles away. 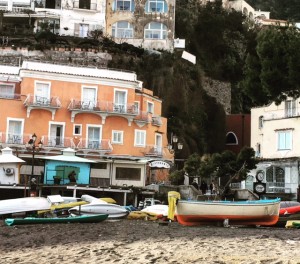 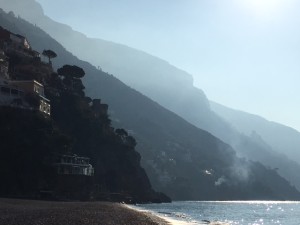 Perspective was easier in Positano, not because of five-star accommodations, but because of Positano itself, with its Easter-egg colored houses clinging to a cliff, its lemon trees in between homes, twisting toward the sun, everything appearing so old and still and lovely. Fewer than five-thousand residents live there. I saw some of their undergarments drying. Laundry lines crisscrossed several households; just outside my fancy hotel, someone hung men’s briefs and a large bra from a clothesline strung across a front balcony. 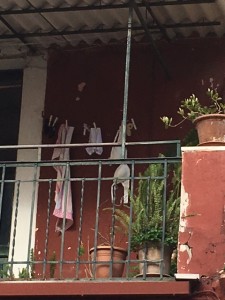 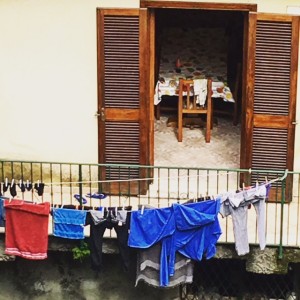 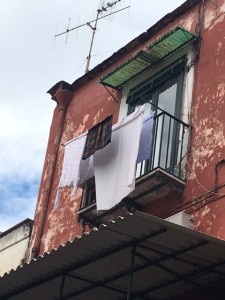 The Amalfi Coast seduces. I get it now. This was my second trip to Italy (the first one being in March 1996), but my first trip going beyond Italy’s cities and to the smaller places. Our hotel, Le Sirenuse, is an exceptional place that deserves all the praise that’s ever been said or printed about it. And it has a magnificent outdoor swimming pool. On the Saturday morning I had to check out, I finally had a chance to try the pool. It had been a chilly, wet week in Positano, the sun often coming out when I had to be inside for a writer’s workshop. But a few hours before check out, the sun was strong; morning felt like early afternoon. I changed into my bathing suit and slipped into the pool. Many of my colleagues were still enjoying breakfast, and while they finished their eggs and cappuccinos, I had what now ranks as the best swim in my life. 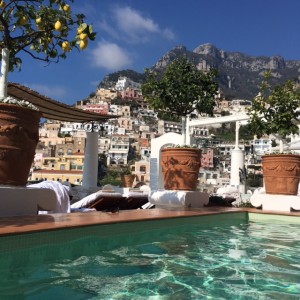 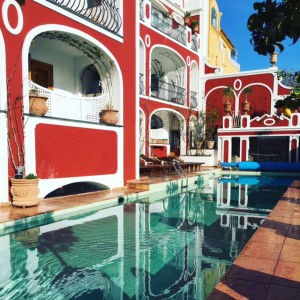 As a hotel pool junkie, this is a notable claim. I have swum in many fine hotel pools around the world; I have gone into debt to travel and experience these places just like I went into debt to travel and experience Positano. The conference and the people and the learning were unparalleled. I hope to attend again. But that swim—the warm water, the smell of the beach just a few steep staircases away, the sounds of the cliff waking up and beginning another weekend. Wow. Just wow. That’s the best I can come up with because you really had to be there. What else can I say other than I had the pool to myself for about 20 minutes, that gliding across the water, I realized Italy was letting me in on its secrets, and that was when I knew I had been completely seduced. I no longer felt guilty about the expense of being there. I wanted to swim until my skin pruned. I wanted to tell the taxi driver taking me to the train station that I had changed my mind.

Positano will balloon with tourists this summer. I was grateful to enjoy the region in early spring, when things are quieter and slower. Many shops were still closed for the winter; a gelateria across the street opened for the season during my week there. Other shops began to unlock its doors and hang their shingles. Poverty used to plague this area during the early twentieth century, and by mid-century, Steinbeck and movie stars were showing up. Being a charming fishing village wasn’t enough anymore. Positano depends on tourism, it needs travelers to be swept away by its beauty, and to keep coming back.

Steinbeck is right: “it’s a dream place that isn’t quite real when you are there and becomes beckoningly real after you have gone.” I thought I arrived with all my practicality in check, and since leaving two weeks ago, I feel haunted by the place. I think about how vertical Positano is, how you ascend or descend to see things. Everything is up or down. You climb stairs carved into homes or the cliff itself or make your way along exceptionally narrow stone roads you share with Vespas zipping by, and if the stairs and roads have been washed by the day’s rain, you pray there’s a railing nearby to steady you. Public buses use these same roads, which blew my mind as I watched drivers handle hairpin turns with familiarity, not slowing down when I thought they should, but they knew Positano’s curves. I did not.

I hope to earn enough money to go back. Writing has been cheapened. Freelance gigs are harder to come by. Book advances are shrinking. Everyone jokes how there’s no money in publishing. Meanwhile, the cost of housing, health care and education have all gone exponentially up while salaries have flattened, editorial salaries being among some of the worst. It’s hard to make things work in the United States. In this election year, I hear many people say the American dream is dead. I want to say “Fuck money!” that I write for the love of language, that I write for the same reasons Steinbeck wrote, that I am compelled by passion, not income or status, which I’ve never really had anyway. And when I was in Positano, it was easier for those things to feel true. Now back in suburban New York, I fret constantly about money. I feel defined by my lack of it. New York is so expensive, and even robust paychecks don’t feel like enough. No one here hangs their laundry outside to dry. Landscapers are always around tidying up people’s gardens and yards. We own one car where most driveways have at least two, sometimes three, and often newer models. What your kid wears and where your kid goes to summer camp reflects how well you are doing. Here in my 1926 Colonial, around the corner from some newly-constructed McMansions, I am writing in my pajamas—as freelance writers do—and I’d like to lift my coffee cup and loudly proclaim “Fuck money!” but the silence that would follow would overwhelm me.