Chasing art exhibits is never a budget-friendly experience, but it is always worth it. My first true art chase happened in January 2011 when I convinced the family that it was worth the money to fly to Paris to see David Hockney’s ipad art exhibit “Fresh Flowers.” There was skepticism at first, of course, and then tickets were booked, planes were boarded, art was admired, and everyone came home thinking “Wow! Let’s do THAT again.”

So we did. This time without planes. 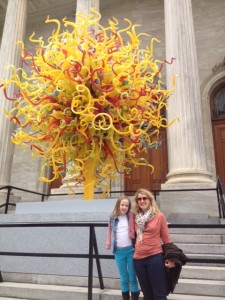 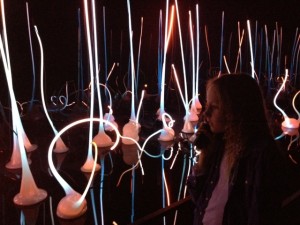 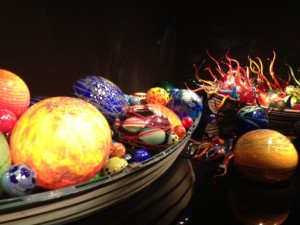 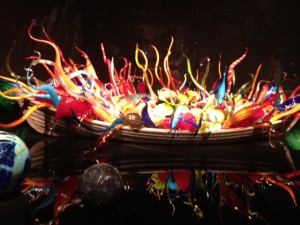 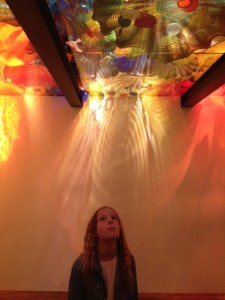 I don’t even remember when or where I read that glass artist Dale Chihuly had an exhibit in Montreal, but it happened sometime when we were in California this summer. Surfers surfed the ocean; I surfed the web, and suddenly we’re back in Canada for a weekend wandering through another museum. Because that’s what we do.

The Chihuly exhibit at Musee Beaux Arts Montreal, which is fun to say (go ahead and say it with a French accent) and even more fun to visit, has now been extended to October 27. When I booked tickets, the exhibit was scheduled to end on October 20, but people keep coming, and when you’ve got a crowd-pleaser, keep on keeping on. My husband is now well-accustomed to my art-chasing shenanigans, but he walked away really impressed by the Chihuly exhibit, and noted that I had successfully pulled off another spontaneous, art-chasing weekend in which everyone thoroughly enjoyed themselves and no one felt bad about the money we should not have been spending. Now that’s a win. Our kitchen may crumble, but, by God, our minds are enriched!

What’s so awesome about Chihuly anyway? Why does a seventy-something, frizzy-haired chunky dude wearing an eye patch and who doesn’t even really blow glass anymore still draw crowds? Chihuly is a controversial figure from Tacoma, Washington, a multimillionaire whose contributions to art are indelible, but beyond that, I don’t have an answer as to why I, and, apparently millions of other folks, find his work so mesmerizing. Maybe it’s the way he bends color and light. I feel the glass more than I see it. The Montreal exhibit features trademarked Chihuly classics: “Mille Fiori” (my favorite), “Persian Ceiling” (very trippy), and “The Boats,” (my other favorite). “Mille Fiori” or “A Thousand Flowers” was inspired by his family’s garden, but to me it felt like snorkeling through the Caribbean, finding secrets within a buried coral reef unharmed by modern life. “The Boats” gave me a similar feeling, like I was floating. Tentacled glass reaches for you, for the ceiling, for the floor. Colors twist. Light bounces. Curves of glass play hide-and-seek. Chihuly’s work is playful and serious. It’s technique and abandon. It’s jagged and smooth. I found a place to sit in these galleries, to absorb all these contrasts, and to look for a long time. 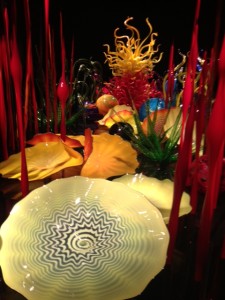 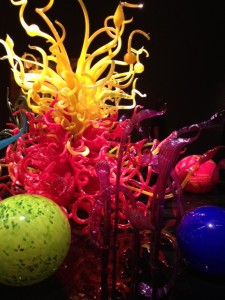 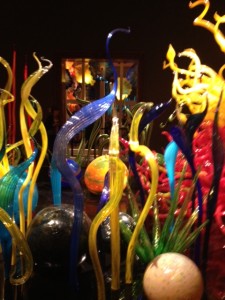 So if you live in the Northeastern United States or Southeastern Canada, get to Montreal before October 27. The art museum is quite full on weekends, so weekdays may offer you more Chihuly to yourselves. After all that gawking and staring at masterfully-designed glass, you’ll be hungry, so read my poutine trail story for CheapOAir, and find out where to get some decent fries, gravy, and curd. Should you miss Chihuly in Montreal, he has a longer-running exhibit at the Seattle Center, where you’ll also find the iconic Space Needle and Experience Music Project. Friends keep inviting us back to Seattle, and it’s on our to-do list. We’ll also be catching Chihuly in the Southwest this winter; a new Chihuly exhibit debuts next month at the Desert Botanical Garden in Phoenix, Arizona, and I’m already planning on getting tickets since we’ll be in the ‘hood.

Speaking of neighborhoods, while visiting Montreal, it’s worth going a bit out of your way to stop at Point G, a cookie shop on Avenue Mont-Royal. This is off the tourist track, where buildings are shorter and streets are a mix of apartments, cafes, dry cleaners, artists’ studios, and bars. Point G, which specializes in Plaisirs Gourmands or Gourmet Pleasures, is a macaroon mecca, and as colorful as a Chihuly exhibit. Flavors come in 22 varieties, like lime-basil, orange blossom, and balsamic vinegar, in addition to traditional dessert flavors like chocolate, caramel and raspberry. All macaroons are gluten-free or “sans gluten” as they say up north. I’m eating a couple macaroons from my box of twenty as I write this. I have two left, and I know that international macaroon-chasing is just not in the cards. 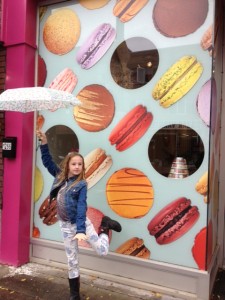 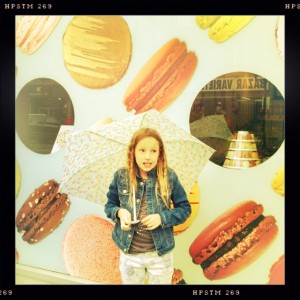 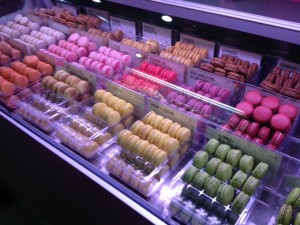