I hate flying and I’ve been feeling sun-deprived after a harsh winter in the Northeastern United States, so why am I spending spring break in Reykjavik, Iceland? There are two groups to thank: the Iceland Writers Retreat led by the indefatigable Eliza Reid, and HBO’s Game of Thrones (that’s right, I’m a big fan of Jaime Lannister, Brienne of Tarth, and Daenerys Targaryen). Both groups put me in that warm writerly mood, the one that feels like expensive wine slipping down the back of your throat softening your organs and bones. Yeah, that’s the one. Or some might call it inspiration. Either way, here I am eager to hear wisdom from writers Andrew Evans, Susan Orlean, Joseph Boyden and Randy Boyagoda. Along the way, I’ll be eating puffin, watching puffin, perhaps buying my daughter a stuffed puffin, and breathing in Iceland’s lava fields and waterfalls, its flirtatious coast and salty winds. 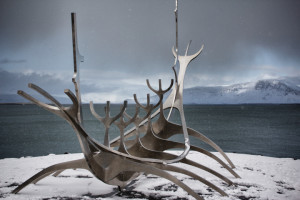 So far, during my first 18 hours here, all I’ve seen, from the windows of our plane, our bus and our taxi, is that Reykjavik is a city of contrasts. It feels like a sleepy New England fishing village crawling with urban hipsters. There’s compelling, bright-colored graffiti next to stores selling gray wool clothing and sweaters knitted by someone’s industrious grandmother (the traditional Icelandic lopapeysa seems to be worn by everyone, young and old, local and tourist). Reykjavik feels like North America and Europe. Rain and sun cover the city at the same time. We’ve already seen two rainbows; not subtle suggestions of color in the clouds, but bright, Biblical, Noah’s-ark-happy-ending kind of rainbows. Reykjavik is surrounded by exquisite landscape yet the houses are colored corrugated iron plates that look like old shipping cargo containers. We’re enveloped by snowy mountains and geothermal pools warmed by hot volcanic rock. It *is* the land of fire and ice. And since fusion is in the air, our first meal during our first night here was a cultural, culinary mix of traditional Icelandic cuisine prepared with Spanish flair at a funky, cozy place unimaginatively called Tapas Barrin. I ate roasted puffin served on blueberry sauce, cod croquettes, Serrano ham with figs and skyr mousse that was so delicious I don’t care who in that restaurant saw me licking my spoon far too slowly. I’m doing the skyr trail while here, so there will be a lot of spoon-licking all over Reykjavik this week. Mike enjoyed minke whale and all kinds of other succulent fruits des mer. Our daughter did what she does wherever we go—she ate grilled chicken. The food was fantastic. I might eat there again before my week here is up.

Flying here from New York took less than five hours and didn’t cost very much as far as trans-Atlantic flights go, but hanging out in Iceland isn’t cheap. Quite a bit is imported, and even for what’s home-grown, there’s some sticker shock at restaurants, souvenir shops and gas stations. Lopapeysas run about $300 USD. If you want to imbibe as Iceland’s founding fathers once did by sipping booze from a viking horn, that will run you about $80 USD. Our Icelandic tapas dinner cost about $180 USD and I sipped water through the whole meal.

Hopefully this writers’ retreat will be awesome (I know it will be otherwise I wouldn’t have boarded a midnight flight in the rain to get here), inspiration will flow like lava, and by the end of this year, perhaps the first draft of my own novel manuscript will be finished or close to finished (I write VERY slowly compared to the tireless, prolific Michael J. Martinez, author of The Daedalus Incident series). Back home, when thirsty again for this kind of artistic motivation, I’ll rely on Game of Thrones reruns to remind me of this trip, of the cool moodiness circling above this hot rock 300,000 people call home.