Relaxation and romance do not usually involve kids, but I can honestly say I went to Quebec with an eight-year-old (and with my husband) and found our week there extraordinarily relaxing and romantic.

Maybe it’s because when you’re walking along Petit Champlain you think you’re strolling down Rue Mouffetard. However, all that romantic sauntering can make lovers peckish, so being New Yorkers, we figured we could grab a cheap bite on the go and continue walking, because you know, life’s a rush. Not so.

Unlike our backyard, which is New York City, where hot dog and knish carts compete on the same street corner, there were no street vendors out in Quebec. I thought maybe some old guy would have some sizzling shredded venison he could serve on a bun for $5 and we could walk and nibble, as we’re so accustomed to doing. We were there in early April, and enjoyed a mix of cool, cloudy days with sunny days, but clouds never stopped street carts from pushing carbs and meat in other cities. Rain or shine, you can always buy a hot dog without having to sit at a table. Even in London, you can buy a bag of nuts and keep moving. Mike went crazy in Ecuador because no one served him coffee in a paper cup; he was cornered into sitting down at a table and interacting with a waiter who poured coffee from a pot into a small porcelain receptacle that Mike was not allowed to walk off with.

Like Ecuador, Quebec wants you to stop and engage with humanity. Walk inside a restaurant–usually one with a cozy fire crackling and the subtle smell of maple syrup being put to heat–have a seat and relax. This kind of forced relaxation blew through our dining budget pretty quickly since we wrongly assumed Quebec would be like New York or Paris or London, a city that lets you walk with your food and scatter crumbs all over. When you eat and go, you spend less. When you sit and eat, you spend more. Suddenly the money we had set aside for feeding three people over five days had been eaten through in just two days. Here’s our typical Quebec meal: chat with waiter, muddle through some poorly pronounced French, order, sip wine while waiting, eat slowly, look at the roasting fire, remark about the differences between a waipiti and a caribou (we’re still not entirely sure, but there’s a difference). About an hour into the beginnings of a long meal out, you found yourself, well…relaxed.

I already mentioned all the calorie consumption opporuntunities in Quebec: macaroons, fondue, maple cookies, crepes, poutine, Quebecois torte, even waipiti tartare. Yet, Quebecers are skinny (and dress like New Yorkers; black coats and plenty of rippling scarves). How is this so? Inspired by the great European cities it was built to replicate, Quebec is fantastic for hours and hours of walking, a perfect way to burn off all the fauna and maple sugar you just ate. It’s also a city built on a cliff, which means if you go down to unwind by the river, and you decide to walk back up to your hotel (most of the city is back up along the cliff looking down on the St. Lawrence), then prepare for a real cardio thigh-toning workout. It’s both healthy and cheap, for the ride up the cliff isn’t free (that’s how Quebecers keep their figures and save for retirement). For those who don’t want to huff and puff their way back to their hotel rooms and would rather work up sweats in a more romantic way, there are some elevators and a funicular railway. For about $2 per person, the funicular will give you a lift back up to the main city streets, not to mention a lovely view of a city clear of the clutter of street carts. Plus, it’s fun to say “funicular.” 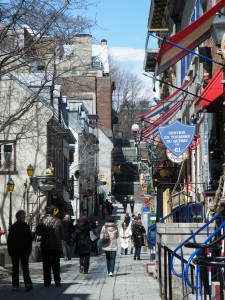 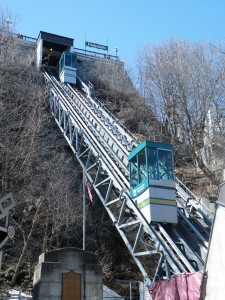 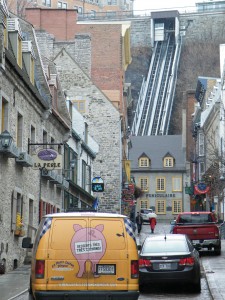 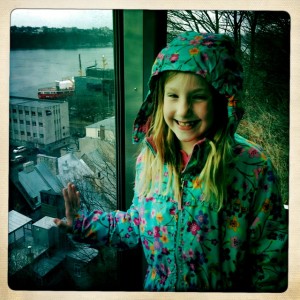 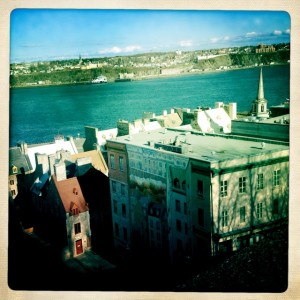 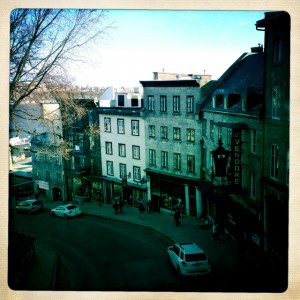 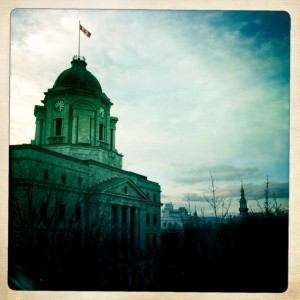 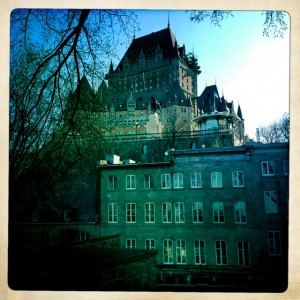 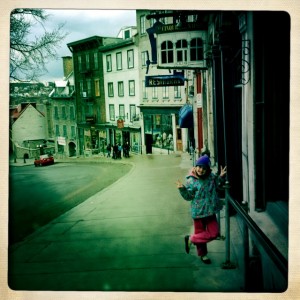 2 thoughts on “Romance in the City of No Street Meat”