I’ve been jogging more lately, which means I’ve caught glimpses of what my neighbors are up to—and not up to, such as cleaning out their garages. I’ve seen a number of garage doors with boxes packed to the ceiling, stuff spilling into the driveway. Catching someone opening his or her garage door is like witnessing a surgery; the surgeon cuts an opening, and the viscera that’s packed in there so tightly overflows past the barriers of skin. 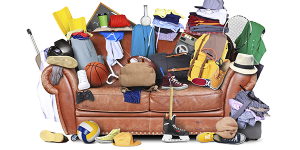 Japanese minimalism hasn’t caught on here, or, if it has, those folks keep their garage doors closed. My husband often jokes I should earn money consulting as a de-clutterer. I don’t have any books to my name like Marie Kondo, only a decades-long track record of purging stuff. One of my college roommates called me “Spartan” because in our cramped apartment in London, I kept only a few items and didn’t paste my corner of the wall with mementos. Open our garage door and you’ll find about seven things that belong to us: my 1926 iron-cast clawfoot tub I hope to reglaze; our lawnmower, a fire pit; two bags of potting soil food; two vintage-style porch chairs. The rest of what’s in there: wooden planks (no idea why or for what); gardening tools; a very old dining room chair that doesn’t seem to match anything; and interior doors from our 1926 Colonial all belonged to the previous owner, an avid gardener who was from Japan, and who spent more time sprucing her yard than the house. Not knowing what to do with her stuff, we just left everything alone.

I’ve been doing some late spring/early summer cleaning, and while I was doing this, the same college friend who called me “Spartan” sent me a story about compulsive purging. I’ll own this, but only up to a point. I will admit that there’s a little brain chemical rush when the Salvation Army picks up old furniture, or when last weekend, some guy in a white pickup truck took the old barbecue smoker I left on the curb (because no one has 14 hours anymore to stand around and turn meat as it smokes). Purging gives me the same brain chemical rush as eating chocolate or dancing or jogging or yoga. Perhaps I was sparking my own joy before it became trendy. But I’m not a compulsive purger, and there are many reasons why.

Walk into my house and books are everywhere. On the coffee table. On the dining room table. On the desk. By the bedside. Sometimes on a chair. Sometimes left in bed. Sometimes serving as a coaster. These books aren’t organized in any particular way, just splayed out in either the order I was reading them or the order in which I brought them home from the library.

I also keep in plain sight a conch I found last year. It was lying in a pile of garbage and rotting conchs on a beach in the Bahamas. It’s absolutely beautiful, a swirl of pink grooves, and people have asked where I got it. When I say “in a pile of garbage,” they often look surprised, perhaps assuming I bought it at a tchotchke shop in Florida, because isn’t that where shells come from? I have a number of shells from my travels (though none from the Galapagos Islands because that’s illegal, and I won’t take anything from Hawaii, whenever I visit, because I’m told that brings bad luck). So I guess you could say I’m hoarding shells.

Also, I don’t buy something, purge it, and then go out and buy it again, which is what compulsive purgers do, with anything from lamps to toasters. Usually when I buy something, I hold on to it for a long time. I have two dresses I bought in 1993 at the Portobello Road Market that I can no longer fit into (no amount of diet and exercise is going to give you back the waistline you had at age 20). Donating them would make sense, but I never will. I also have a lovely antique-looking (don’t know the exact date) chamber pot Mike bought for me also at the Portobello Road Market when he was there in 2015. Do I keep a chamber pot next to my bed? No. Do I love having a chamber pot sit on my bookshelves next to a century-old Lithuanian typewriter? Yes. Will that chamber pot ever fall into the Purge Pile? Never.

I fall somewhere between wanting that Japanese aesthetic and wanting a Cuban aesthetic, and I recognize that sentence makes no sense, but let me explain. When I went to Japan in 2013, and walked into hotel rooms or restaurants where the only adornment was a single vase with a single flower, or sometimes just a vase or piece of pottery, nothing on the walls, no other distractions, I thought: “I’m home. This is me.” Clutter gets on my nerves, space calms me, and Japan calmed me. And then I walked into paladars in Havana where the walls are sensory experiences, filled with color, dozens of paintings often by local artists because Cuba brims with art, fresh flowers, an old record player, and I thought: “I’m home. This is me.” Color and eclectic stuff make me happy, and Cuba makes me happy.

The decor of our 1926 Colonial swings between these two. I’m not sure it works, but I’m being honest with you in case you visit.

We’re not shoppers. We don’t routinely go to malls or have boxes on our front step from Amazon. We are surrounded by folks who are Black Belts in online shopping. When I’m in Cuba, I think about the Story of Stuff, and wonder what Cubans would think of this, an island where there’s a shortage of just about everything, where I brought a suitcase full of art supplies and baseball gear. How do you explain that de-cluttering has become a middle class American battle cry? Whenever I come back from Cuba, I’m always in shock at the 10,000 brands of toothpaste on the shelves here or the hundreds of shades of nail polish. Do we really need this much?

Research suggests clutter reflects stress, anxiety, and depression, and adds to these feelings. I believe this to be true, though I have my own unique compartmentalization techniques my husband still quite doesn’t understand. I can’t stand the clutter of a pile of shoes (I like shoes kept in their original boxes so they don’t get dusty), but I don’t mind a sloppy stack of books. I can’t stand too many kitchen utensils or appliances cluttering up our small kitchen (really, how many spatulas and frying pans does one need?), but I’ve got a five-foot metal sunflower made in New Mexico that I lovingly dust. A pile of dirty clothes will fray my nerves but a pile of seashells from Mexico, Florida, Jamaica, is okay. It only makes sense to me.

My mother-in-law spent decades shopping herself into poverty, and when she passed away from leukemia in 2014, my husband and I geared up for the arduous task of going through her house and sorting through her stuff. She had countless unopened boxes from QVC, including multiple salad spinners and asparagus cookers (so that you could cook asparagus vertically instead of horizontally in a conventional saucepan). To call the experience sobering is an understatement, and perhaps afterward, my husband came to appreciate my quirky de-cluttering tendencies (or maybe not; you have to ask him).

The death of a loved one, the clearing out of a house, always makes us pause and think about what we really need, what should stay and what should go. Whenever we move out of our 1926 Colonial and away from these overstuffed garages and McMansions, I will feel a huge sense of relief but also, surprisingly, some sadness. We’ve lived in this house for seven years now, and I’ve grown very attached to writing on my enclosed front porch, where I write this blog post. I will miss this porch very much, one of the main reasons we bought the house. I will miss my other clawfoot tub in the upstairs bathroom (I will reglaze its twin someday), where I would soak after a day of skiing in the Catskills. I will miss the backyard Easter egg hunts that we no longer do because kids quickly outgrow such activities (we already donated the plastic eggs we used to fill with candy). I will miss roasting s’mores on the backyard fire pit. We will be eventually downsizing because my husband and I dislike lawn care and we only use two-thirds of our 1,430-square-foot house, which is modest compared with current American floor plans. We are not very good suburbanites. It’s time for a change.

Five years from now, which will happen in a blink, our only child leaves for college. I’ve kept five or six large plastic bins filled with stuff from her childhood: tiny handprints cast in clay; crayon drawings; some baby clothes; some baby toys—items that used to be randomly tossed about our apartment before we bought this old house because back then, they were everyday objects. I remember during those early years, feeling overwhelmed by baby clutter, the strollers, the swing, all the bulky plastic toys before she became old enough to play with small Legos and not swallow them (and then the tsunami of Legos overwhelmed me). Over the years, I set aside the items, many that my daughter made, that I could never say goodbye to (though she was such a prolific artist we did have to toss quite a bit of art). Now, these objects that were once taped to the refrigerator or gathered dust on a table are mementos and memories stored in bins, bins that will follow us no matter where go, no matter what the anti-stuff experts say.