Memorial Day weekend approaches, which for some strange reason signals the beginning of the barbecue season, the pool season, and the pitch-a-tent-outdoors season. When we lived in Seattle, people went camping the way I run to the grocery store for milk. You packed up your gear, drove in some direction and within less than an hour you were pitching a tent in God’s country and telling stories by a campfire. That’s harder to do here in metropolitan New York City, and even once you drive two hours in any direction from the Big Apple, you’ve barely reached the border between retail-centric suburbia and dying mom-and-pop shop smalltown.

We’ve always liked to mix it up, from five-star amenities (which we did in Quito and Quebec) to sleeping on the earth. Before my suburban mom life in metro New York City, I camped in several national and state parks. My national park list is not as impressive as I’d like it to be, but it will grow, and so far includes repeat stays at: Assateague Island National Seashore in Maryland where wild horses strut across the sand past RVs; Shenandoah National Park in Virginia’s beautiful Blue Ridge Mountains, where I saw this very haunting and lovely shadow of a deer nibbling grass near our tent; and Acadia National Park near Bar Harbor, where I went whale watching and ate blueberry pie. 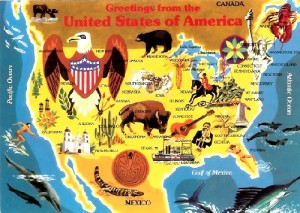 Just the words “national park” imply something sacred and shielded from the rest of the world. The parks are as unique as faces and have their own distinct rhythms and stories to tell. Assateague is a real treat if you time it right; June is a gorgeous time of year in the salt marshes with hot sunny days and clear, chilly, though comfortable evenings (if you’re dressed warm enough and have thermal sleeping bags–it does get brisk by the ocean). However, July is a completely different story at Assateague; it’s humidity at its worse, and when we visited, we battled thunderstorms and mosquitoes. The bugs were so bad that even when I stood by the campfire to eat breakfast thinking the smoke would deter them, the mosquitoes would kamikaze into my orange juice or coffee. Despite that negative experience, I did not sell our gear when we got home (you’ll see why that’s significant in a moment). Other national parks on my list include Rocky Mountain National Park and the Grand Canyon, but I only visited there, and did not get a chance to camp. Later this summer, we’ll visit Redwood National and State Park in California. I have yet to visit our first national park Yellowstone, which predates the creation of the National Park Service by more than 40 years.

My most memorable camping experience occurred in Orick, California, where we camped on the beach and feared the state icon–the brown bear–sniffing out our S’mores and mauling us to death. Aside from the bears, the weather was a bit rough. We tried to cook pasta and enjoy it with red wine, but it was so cold and windy on the beach that our food chilled the second it was removed from the campfire and our tent was blown down repeatedly. Sand constantly blew into my eyes, nose and mouth. After a few hours of this, I was hoping a giant bear would find us just so we could have an excuse to leave. I got so fed up with the whole trip that I sat in Mike’s 1987 Dodge Aries reading the The New Yorker while Mike being Mike tried to salvage the weekend. Once we were back home in Seattle, I immediately sold all our camping equipment to a colleague. A few years later, missing the land and wanting to sleep under the stars again, we went back out and bought new gear.

Families frequently use camping and escapes to Mother Nature as a way to switch off and reconnect. You don’t need to wait for summer vacation to do unplug. Last weekend, I went to our local nature center and sat listening to the birds while my iphone sat idly by. I felt like I was listening to the soundtrack at the spa. Just a few minutes of tuning into the breezes and the birds and not compulsively checking email was fantastic! My daughter seems to be a budding conservationist and she’s at a great age to learn more about our national parks and transition from occasional participant, which is what I am, to active advocate.

That said, if we want to continue to have quiet green spaces to enjoy, we need to protect them. Modern development, political interests and greed constantly encroach on the borders of lands sworn to public protection. Visit the National Parks Conservation Association website and there’s a laundry list of rules looking to be made unofficial by our officials, with everything from allowing the hunting of wolves to the building of coal plants. If you care about sharing national parks with future generations, I hope you will support the National Park Foundation’s efforts to salvage what’s left. In some ways, I suppose we’re lucky to have what we have. It can feel wonderous and depressing to imagine what the United States looked like before Interstate 90 connected the East Coast to the West Coast, when Lewis and Clark had to find their way through thickets of lush forest and national parks weren’t “national parks” but simply land that stretched on to the heavens.