Once you decide to spend spring break drinking tequila on the beach, the next question is “which beach?” followed by “whose tequila?” The real me wanted to sip distilled cactus juice on Isla Mujeres, which is now one of my favorite places on the planet–not bad for an island where I only spent five hours. The practical me opted for Cancun–their beaches, their tequila, even though I preferred Isla Mujeres’ ambiance. The mega-resort packages were better deals (beach and tequila combined instead of a la carte) and didn’t involve a third leg of a trip–grabbing a ferry from Cancun and making the additional half hour ride to Isla Mujeres (the first two being the jump from Newark to Houston, followed by Houston to Cancun).

I decided Cancun would be Family HQ so we could saunter off to other places: Isla Mujeres, Tulum and Xel Ha. But before I share why Isla Mujeres (for me) ranks among other favorite places such as Paris; Victoria, British Columbia; coastal Maine; Cornwall, England; Santa Monica beach; Isabela, New York City’s Bleecker Street; and San Francisco’s Chinatown; let me share why we went to Mexico in the first place:

The guacamole in Mexico is consistently fresh and phenomenal. Who knew the avocado could make me gush so?

The chicken there is always moist (and I don’t really love chicken). I don’t know what Mexicans do to los pollos, but it rivals the phenomenal things they do to avocados. I don’t like what they do to their salmon. It’s dry and bland. I’ll enjoy salmon when I’m in Canada.

The tequila is smooth…um, very, very smooth. And brought to you frequently by men who always smile and have names like Domingo and Javier. They sound like heroes from romance novels, and, perhaps, as bartenders in Cancun, they are.

The sea is the color of the most inviting swimming pool imaginable–shades of blue that radiate calm, trust, release. It begs you to forget your inhibitions and jump in.

Once dropping off the luggage in Cancun, the first stop had to be Isla Mujeres, which embodies all that is wonderful about Mexico without feeling like the shopping mall that Cancun has become. Though gaining interest among tourists and people who want to party somewhere less-crowded, Isla Mujeres is still a place for people who want to be left alone. It’s filled with fishermen, artists, and abuelitas who remember the old ways. I regret not hiding there for the entire week, but then again, it’s a family vacation. Gotta share.

Isla Mujeres is best enjoyed by golf cart. Now, how often do I get to say that? Bikes are available for rent, but it was incredibly hot and I was full of delicious fish taco and that guacamole I keep harping about. Spring break is about being lazy and getting sunburned. So we rented a golf cart for 2-3 hours, which cost about $45 USD. The island is only five miles long and a half mile wide at its widest point so a golf cart can cover a lot of ground in a short amount of time.

What’s fantastic about Isla Mujeres is its colors. The sultry pink of flamingo feathers. The deep red of an over-ripe strawberry. The hot white sparkle of the sand. Such cacophony of colors has faded from Cancun, but sings on Isla Mujeres. The colors are in the sea, the flowers, the buildings, the tchockes–from smiling skulls to smiling butterflies–the bangles and jewelry women clink around in, the food that arrives on the plate from a waitress bedecked in color and jewels, even the ice cream colors! It’s all there, ready to be consumed like a cool, pink drink from a your dear friend Domingo. 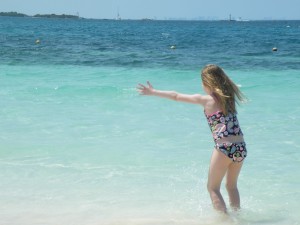 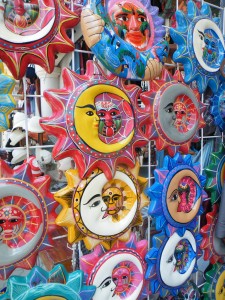 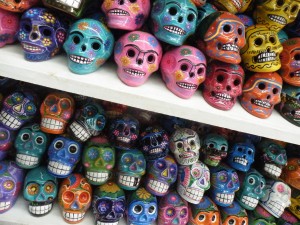 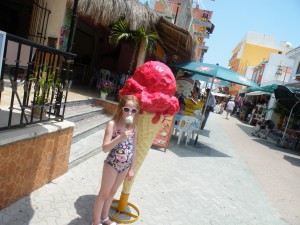 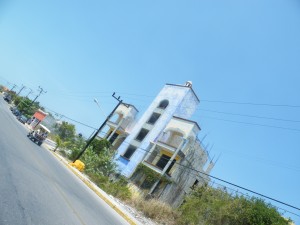 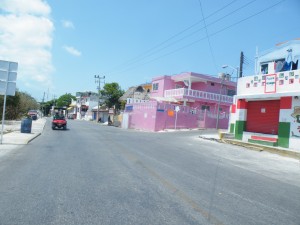 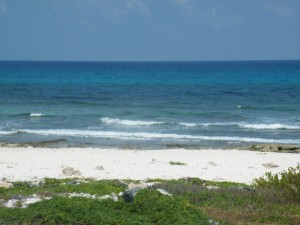 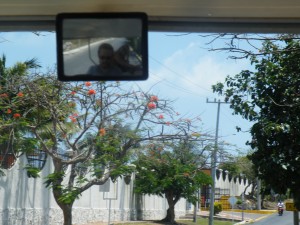 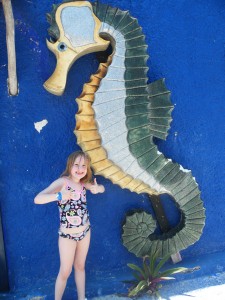 An iguana enjoying the colors of Isla Mujeres 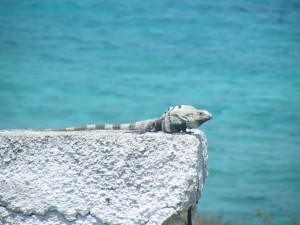