Tomorrow is the start of October, and usually I love this month. It’s glorious. The changing leaves. The variations in temperatures. The sky is a different kind of blue. Autumn, and October in particular, is pretty, though I’m not a fan of everything suddenly becoming flavored with pumpkin spice (that starts on September 1 for some reason, when the American Northeast decides everything should smell and taste like pie).

This autumn, the changing skies feel more ominous to me. Today was a very gray, gloomy day in the greater New York City area. Everyone wore black and carried black umbrellas. It felt like a funeral for summer. Today reminded me of my three years living in Seattle. In Seattle, I would become very depressed starting every November, I’d stay balled up until about April, and then between May and October I felt fine. I couldn’t figure out why. Then we moved to Washington, D.C., where winter seems to last seven weeks, crocuses pop up in late February, it’s generally sunnier, and suddenly I felt okay. 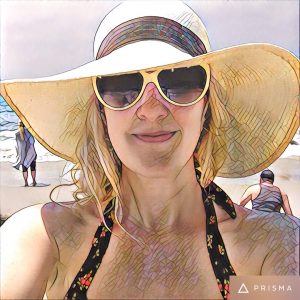 I have seasonal affective disorder (SAD), and last winter was my first winter managing things without medication. Folks, it’s hard. You feel dysfunctional for about four consecutive months, that’s one-third of the year where you don’t feel like yourself. It’s only September 30, and today I had to use my light box for over an hour. Just a month ago, I was on a beach in Los Angeles trying not to get skin cancer.

I do all the things they tell people with SAD to do: I sit in front of my light box, which I named Helios. I do yoga, I dance, I bike if the roads are dry, I lift weights, I don’t hide in the house all day, I meditate, I meet up with people for lunch/dinner/drinks. I go outside. Last January, I remember sitting on my front step in 25-degree cold sipping hot coffee just because the sun was everywhere that day. The lack of sunlight is more than just a mood thing for me; ongoing darkness sends my thyroid into overdrive, which sends my body into a state of stress, which causes my heart to sometimes skip a beat—usually while I’m trying to fall asleep—which sucks because winter makes my insomnia worse. No pun intended, but there’s a snowball effect, with the physical following the mental. Darkness makes me anxious.

I was born in the Snow Belt. I grew up in a house where everyone yelled, where fallen apples or too much snow covered the ground most of the year. I lived in upstate New York until I was 22 years old. Summers were hot and short; winters were long and bitter. I believe my restlessness and need for travel began there in my childhood home, two miles from that moody Lake Ontario shoreline; I can’t recall a time growing up when I didn’t want to be somewhere else. And now, on this overcast day, as I watch neighbors’ Halloween decorations go up, as I overhear people revel in that “crisp fall air” vibe, I feel incredible isolation, for all I want to do is head to Mexico before Trump builds that wall, eat tacos, read on the beach all day, and dance at the clubs all night. This year, I was fortunate enough to travel to the Bahamas and Cuba, two late-spring trips within just a few weeks of each other. Let’s just say the Caribbean (and Mexico) is medicinal.

Last October, I went on a press trip to Mexico and noticed a change in my body chemistry while there. The trip was annoying, but my body felt calm. Sunshine flooded me. I came home four days later, daylight savings kicked in, which meant it was now dark by 4:30 p.m., and once again, I was huddled on the sofa trying not to think about death.

When I say sunshine and palm trees give me the feels, I mean it—literally. We are looking to move to Los Angeles, but that won’t happen until 2018, so I still need to cope with the Northeast for another year and a half. I would probably do very well with a Colorado winter—that state gets so much sunshine year-round it’s like someone smiling at you all the time. As I keep telling people, it’s not the snow or the cold that bothers me—I love to ski! It’s the lack of sunlight, the cloud cover, even the lack of color in the sky. The heaviness of this kind of weather sends my serotonin tanking. Today, I had practically every light on in this house just to counter the darkness outside, and we’re less than two weeks into autumn.

This fall and winter, I am armed with more strategies, now that I have a sense of what to expect off-meds. We are going to Florida in December. I am visiting a friend in Arizona in February. I am chopping up winter into more bite-sized chunks, unlike last year where I thought stubbornness and focus would help me slog through the entire season. Instead, I huddled at home. Nature showed me who’s boss—again. This time, I plan to soak up whatever sunlight I can wherever I can, and store it like a camel. I’m even getting on a plane to seek out sunshine, and I hate flying, but I figure a trip somewhere will take me out of the spiral that is SAD. And then in mid-March, we set the clocks forward and daylight will start to stretch into 5 p.m., 6 p.m., 7 p.m. That’s when I feel the tension subside, negative narratives melting with the snow. Longer days mean more possibilities. The sun signals psychological relief, even optimism. And then we get to June when the sun lingers until 8 p.m. or so, like some dinner date where the conversation is going so well that you lose track of time, and you say “Yes! You’re still here! Let’s order Mai Tais!”