My husband and I are frequently up by 6 am; he works out at 5:30 am. So why the hell would we wake up voluntarily at 5:45 am, fumble through the cold and pitch dark and drive 10 miles from our hotel? Here’s why: 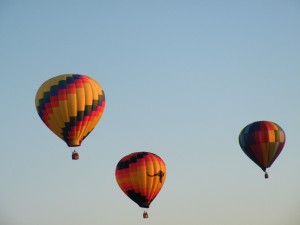 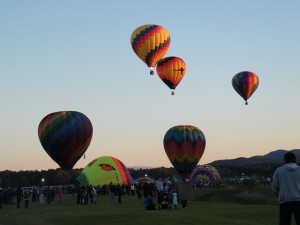 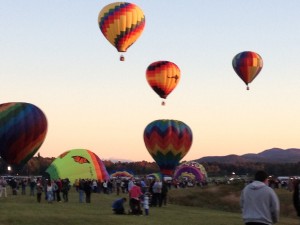 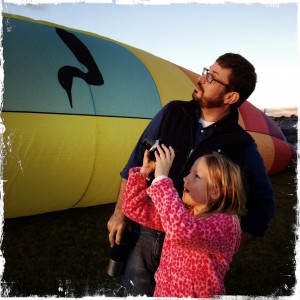 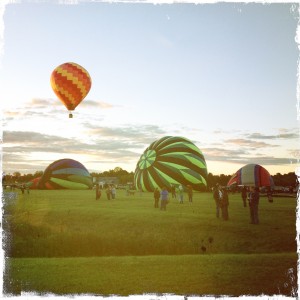 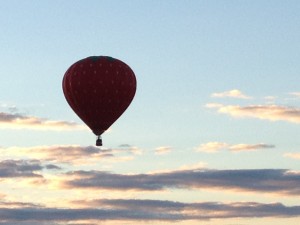 The Adirondack Balloon Festival in Glen Falls, New York, was held over the fall equinox, and gave me the chance for a last summer swim in Lake George followed by a hot cup of coffee on a crisp newborn fall day. I thought it would be a fun, inexpensive weekend jaunt and maybe we’d catch a little fall color up north. On our drive up we spotted fall color and witnessed a meteor falling. That was a first.

I had never been to a balloon festival and the one time Mike and I tried to ride a balloon in Napa Valley 13 years ago, the flight was cancelled due to wind. Weather interfered again, as it often does, this time with rain. I was worried the weekend was going to be a total washout. We were upstate, wandering about, getting soaked, occasionally enjoying leaves and lake, but I really wanted balloons. We returned to Floyd Bennett Memorial Airport at 6:30 am Sunday morning, the final day of the festival, hoping weather and wind would oblige.

Nature delivered! We stood on a muddy field while pilots and crews dragged hot air balloons all around us. Balloons snored and panted while being pumped with air. They lay partially deflated on one side against the cool grass like giant, lazy, loyal dogs. Then suddenly, the balloons were nudged and completely vertical. Time to get up–literally. Pilots fired up, hopped into their baskets, and took off. And the whole process only took a few minutes for each balloon. Once afloat over the field, they glided across the Adirondacks while sun filled the sky. Now that’s worth getting out of bed ridiculously early.

The balloon festival lasts three days with music, games, crafts and other activities, so families can certainly make a full weekend out of it. This year marked the festival’s 40th anniversary. The balloon festival accounted for an hour of our weekend. We watched that glorious Sunday morning flight of the balloons until they were far adrift in the clouds, just a pattern of polka dots on a pink and gray feathery swath of sky.

So how else did we spend the time? We explored. We hiked. We walked around downtown. We checked out to see if there were any ghosts haunting Fort William Henry, where we overheard a cashier complaining of eerie footsteps and the sound of men moving about even though she was alone in the shop. I also mentioned my “where did summer go” plunge into Lake George where I actually grabbed a few short laps on a 56-degree day. The air was chilly, but the water was still warm from the summer sun. 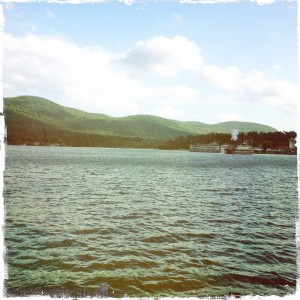 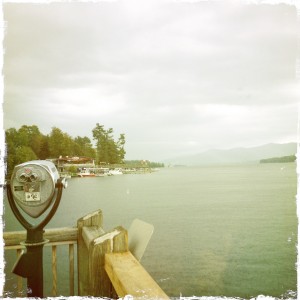 We dined twice at Flapjack Pete’s in downtown Lake George; the restaurant’s cinnamon-flavored butter and creative uses of antlers in its decor made it worth the second trip (plus the service was awesome, the bacon was sublime–and plentiful, too plentiful–and the flapjacks were spot-on!). The breakfasts are indeed colossal. To quote my daughter, “bacon is a sometimes food.” Just sometimes I eat too much of it. I strongly recommend following any time at Flapjack Pete’s with a brisk hike in the Adirondacks to undo the cardiovascular damage. Or kayak Lake George–the beaches and hotel grounds were littered with colorful kayaks resting on their sides, like tired hot air balloons.

Downtown Lake George is quite cute, and there are plenty of tchotchke shops, arcades, and fast food joints on the main drag. You can picture Polaroid shots of families spending their summers there. The downtown area and surrounding hotels and motels looked a bit frozen in the 1960s, faded signage still luring visitors. It’s like this beautiful, serene, heavenly slice of natural wonder–Lake George and the Adirondack Mountains–with a big plastic snow globe in the middle. I wasn’t expecting upscale and I’m not even sure what upscale means anymore since it’s a word that has been about as watered-down as ‘luxury,’ but I was surprised to encounter such a dated, plastic feel to a place. It felt like picking up an old toy, this artificiality tucked in the mountains.

I also noticed a dearth of nature’s influences on the restaurants there. When strolling the main street, we found plenty of eateries that would serve us fried cheese and the usual middle-America fare, but no one was dishing up any garden-to-table cuisine despite flyers for farmers’ markets everywhere.

This intrigued me, and in a way, struck me as very different from Vermont, which was spitting distance from the border. Vermont, who fights Wal-Mart; Vermont which is home to the one of the nation’s only Institute for Artisan Cheese (no fried cheese there!); Vermont, which makes it easier for its residents to live up to its agricultural war cry “Buy Local. Buy Vermont.” My husband’s response was that farm-to-table dining is considered upscale, but this isn’t true. Farm-to-table dining is common sense in the era of industrialized Big Food. Farm-to-table is a return to simply eating what was grown nearby; you grew it, you cleaned it, you cooked it, you ate it, and you canned, jellied, froze whatever leftover bounty the garden offered (yes, we had a garden growing up).

Again, this was only observational–lots of flyers promoting area farmers’ market, but farm fresh wasn’t anywhere on the menus where we tried to eat. We did visit the Glens Falls Farmers’ Market at the South Street Pavilion and I bought some organic zucchini I later shredded and baked into bread. I thought a farmers market would’ve been a great idea at the balloon festival. Watch dozens of hot air balloons of all shapes and colors take off, grab some fresh zucchini to go. Feel connected to sky and earth all in one place. 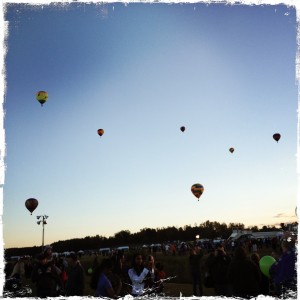