Washington, DC, is a city known for burning people out, yet trees appear to weather the hot air in our nation’s capital better than our politicians. The beloved cherry trees that serpentine through parks and along the Potomac river are still going strong after 100 years. In 1912, Tokyo gave DC 3,000 trees and wished a nation in its infancy purpose and prosperity, so this year, Washington celebrates its 100th anniversary of being home to these trees. These trees have seen leaders come and go–FDR telling us not to fear anything; Martin Luther King Jr. speaking to crowds on the National Mall; Nixon’s famous farewell before boarding a helicopter. When the trees puff out this month and look like swirls of fluffy pink cotton candy, Washington will look like Woodstock–colorful and crowded; who says Americans don’t care about the environment? We treat our cherry trees like rock stars. 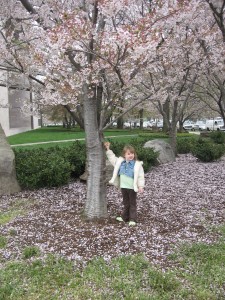 Official cherry blossom viewing time is expected around March 24-27 this year, and the monthlong festival of pink blooms kicks off with the spring equinox on March 20. This festival attracts thousands of people from everywhere–even Japanese tourists, who have their own beautiful cherry blossom trees. Walking through the parks is not a picnic. You are shoulder to shoulder with locals and tourists as everyone shuffles along looking up at the trees clicking their cameras. We lived in Washington, DC, from 2000 to early 2004, and were amazed by the moment-to-moment news coverage leading up to cherry blossom season. Tree photosynthesis was reported like a major league sporting event. The stakes were high and the outcomes unclear. What if winter dragged its heels? News anchors would interview anxious botanists about the risks snow posed to the fragile blooms. Or if spring sprung early, the trees would bloom prematurely, and would anyone be there to see them? News anchors would interview anxious hotel owners praying Mother Nature would dial down the unpredictability.

If you’re looking for a fun long weekend, DC is the place. During the cherry blossom festival, the city hosts what was formerly known as the Smithsonian Kite Festival, which is magical and great for kids. What’s also great for families is that the kite festival is held on the National Mall, which is surrounded by

Our last visit to Washington, DC, was in April 2008, when Anna was still a preschooler and Angelina had only four kids. Much has changed since then, and we’re due for a return. We have our favorite places to eat: Rockland’s Barbeque on Wisconsin Avenue, just across the street from Whole Foods and a short walk from the National Cathedral; Old Ebbitt Grill, a classic Washington DC haunt that’s been dishing up beef, oysters and pretty much any form of animal flesh since 1856 (DC is a carnivorous city, in every possible way); and for the non-carnivorous crowd, Sticky Fingers Bakery in the delightful Adams Morgan neighborhood, a great place for vegan cupcakes.

Besides the food, Washington, DC, is wonderful for walking, much like Paris. I would love to see the new Martin Luther King Jr. Memorial, although my favorite is the Jefferson Memorial overlooking the tidal basin. He has one of the best views of the trees and I imagine his statue stepping down from its pedestal and walking among the cherry blossoms during the middle of the night when the crowds have gone, perhaps thinking what a remarkable, dynamic, messy, beautiful place America is. 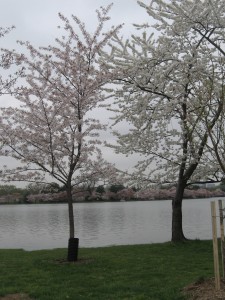 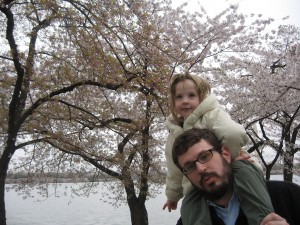 Last time Anna was in Washington, D.C., she was about the size of a grapefruit. I was six months pregnant, it was the second week of January, the war in Iraq was not quite a year old, and we were preparing a move to New Jersey. Since Anna never got a chance to experience the nation’s capital outside of the womb, we thought the cherry blossom festival would be the perfect opportunity to show her the city where she was almost born.

After visiting some friends, we hit the hot spots. We explained to Anna that Washington is a city full of pink trees, white buildings, and myopic Republicans. We showed her the Capitol and explained to her that this was the Big House Where Republicans Make Bad Decisions. She was not impressed. 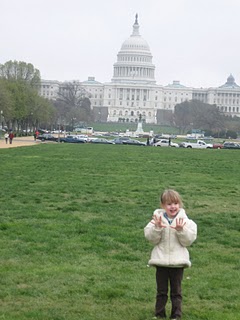 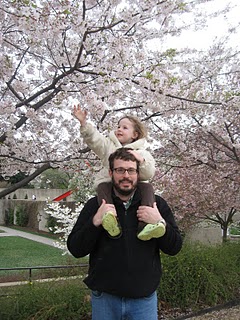 However, pink trees always impress. It was surprisingly cold in Washington. I remember jogging in shorts during the month of March back when we lived in D.C. On this visit, we couldn’t walk the Mall without bundling up in winter coats and scarves. 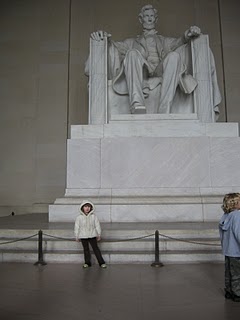 Because it was so cold, we spent more time indoors than I expected to. The Smithsonian museums are wonderful places to warm up and run into celebrities–Angelina Jolie happened to be in Washington that day and took Maddox and Pax to the National Air and Space Museum. I guess the girls were with Brad. Anna and Mike didn’t see Angie, but I did, and let me tell you, that woman is as rail-thin as the dinosaur bones in the Natural History Museum. We didn’t see Elliot Spitzer in Washington, but my guess is the former governor is swamped and too busy for leisure strolls beneath the cherry blossoms.

We didn’t get a photo of Angelina Jolie, but we did capture Anna appreciating Monet, a wonderful mommy moment for me. Anna likes taking a sketchbook to art museums now. We may have a budding Picasso on our hands. 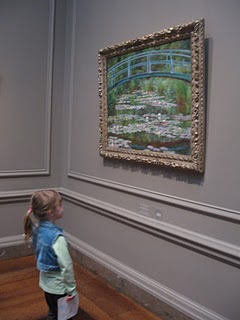 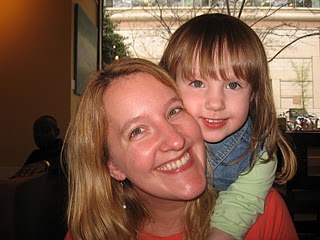 Mike and I lived in Seattle for three years, followed by three years in Washington, D.C. This past year, we had the opportunity to visit them both, and it surprises me to say I feel closer to Seattle than D.C. Washington is a beautiful, historic city brimming with Southern charm. There is nothing like strolling through Georgetown after brunch on a warm spring day. But the downside to D.C. is that it’s a city people pass through. Unless you’re a political pundit, you’re usually not in D.C. for long. Despite its new baseball team, Washington still lacks a sense of hometown pride that is in abundance in Seattle and that hits overkill levels in New York.

Still, Washington is a lovely place to walk, even if it’s your umpteenth time seeing the Lincoln Memorial or the Washington Monument. And inside those white buildings brews an indecisive friction. What I like about Washington is that you don’t necessarily have to be wealthy to make it. You just need an idea, crazy or not, and the drive to see it through. It’s a city of dreamers. 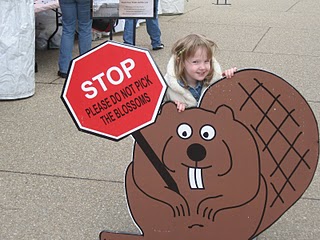