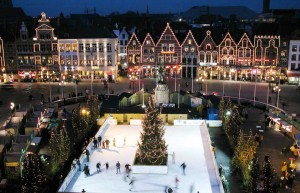 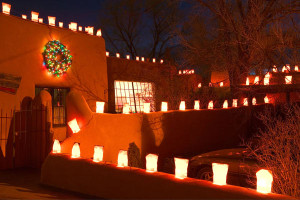 Today, this popped into my inbox: 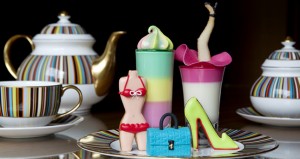 And I promptly started to drool and look at airfares to London. Impulsive? Maybe just a little. But I’ve planned vacations based on news stories about chickens.

The Berkeley Hotel in London’s Knightsbridge neighborhood (near Harrods) announced its Spring/Summer 2012 Prêt-à-Portea afternoon collection. Inspired by the season’s fashions, the Berkeley offers one of the Western world’s most creative, colorful daily afternoon teas for about $50 USD, or thereabouts, that includes posh pastries and savory sandwiches. Sample a Miu Miu vanilla bikini biscuit, Jason Wu’s cherry bavarois and coconut creamed pudding topped with a sexy leg stretching to the moon, and a “fabulous” Christian Louboutin neon yellow high-heeled chocolate cookie–a heel so high and so pointed it could stomp out all pointless cares and concerns. And those are just the cookies!

We did the fashionista tea at the Berkeley in December 2009 when Anna, Mike and I nibbled on a Mulberry Bayswater handbag with silver clasp, a Roger Vivier chocolate ‘over-the-knee’ boot, a Christian Lacroix dark chocolate dress, and a Burberry Prorsum classic trench coat–all washed down with some classic Earl Grey.

Not in the mood to lick a fondant bathing suit? No problem. Beginning May 29 through June 12, the Berkeley is offering less risque tea time confections to commemorate Queen Elizabeth II’s Diamond Jubilee. Only one other British royal reached her Diamond Jubilee and that was Her Majesty Vicky in 1897. Did she eat biscuits shaped like Marilyn Monroe’s legs? Most likely not, but this is the 21st century and I think Queen Elizabeth would appreciate Prêt-à-Portea – The Royal Collection’. Not surprisingly, there are several hat-shaped cookies, given the queen enjoys a well-crafted chapeau and is said to have worn 5,000 hats since being crowned 60 years ago. Dive into delectables such as a biscuit sculpted to look like Queen Elizabeth’s crown worn for her coronation in 1953; a more ceremonial blueberry hat cake reminiscient of what we often see Her Majesty wearing when we catch glimpses of her on the BBC. Decorated with sugar roses and green leaves, this cookie is based on a design by royal milliner extraordinaire Rachel Trevor-Morgan. Pralines and iced cakes also make up the Royal Collection.

I’m jealous of anyone who will be roaming around Knightsbridge later this spring before Summer Olympics mayhem strikes and can just pop into the Berkeley’s Caramel Room for a break from luxury goods shopping. If you do need a place to rest your well-heeled heels, try the fashionista or Royal Collection teas, and email me the sweet juicy details.

If only artist David Hockney knew the lengths I take to see his iPad work. Would he sell me a priceless sketch on the cheap (after all, he doesn’t really need the money anymore)? Living outside New York City grants me access to some of the best art museums in the world, but interestingly, not to Hockney’s drawings. After living in California for years, he’s now settled back in the Mother Land and exhibits only in areas that are within a three-hour car ride, Chunnel trip or flight from his home: England, France, and Denmark.

Hockney will be showing his latest iPad art at an exhibit hosted by the Royal Academy of Art in London during the first few months of 2012, part of a cultural kickoff to get the world’s eyeballs on the rainy city with the big clock and all those red buses as it prepares to host the Summer Olympics. And guess what? We’re thinking of going. Never mind that we went to Paris in January to see his Fleurs Fraiches exhibit at Fondation Pierre Berge Yves Saint Laurent or that we were in London in December 2009 sipping pints and noshing on bangers and mash. 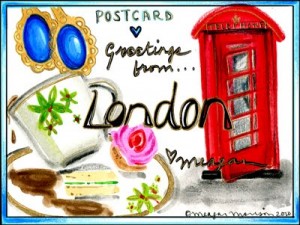 Hockney’s newest doodles focus on winter turning to spring. The iPad with its dynamic nature and ability to capture fluid light so well is the perfect vehicle for distilling one of our most remarkable and returning transformations. Spring surfacing through winter’s cold crust is particularly near and dear to me; I can’t stand winter despite being from the Snow Belt and I beg for spring’s arrival the way 11-year-old girls scream for Justin Bieber.

There’s no rational or financially sound reason for schlepping to London—a city I’ve now visited three times (and can even offer pub recommendations)—and see the work of an artist I just enjoyed five months ago the last time I hopped across the Atlantic. Except that we can…and we want to. Mike’s already trying to figure out if his third time to England could at long last include a jaunt to Stonehenge, a prehistoric circle of rocks he’s wanted to see for years yet somehow never manages to make it on to the travel itinerary. My goal is far simpler: to be served tea with baked beans, scrambled eggs and bacon. Yes, I can eat that here, but it doesn’t feel like a traditional English breakfast when consumed at a diner in New Jersey where people talk like Joey Buttafuoco—it’s just fried food I really shouldn’t be eating. Besides, I don’t need justification to visit London again—it’s like seeing an old friend. You always make the time.