The year Anna was born was the year we began going up to the Fingerlakes region every summer. It’s about an hour from where I grew up and despite evolving into the third largest wine producer in the country, its laid-back pace remains unmarred by modern life. And that’s why we go there. We celebrated Mike’s 36th birthday with meat, beer, cake, and a boat ride, surrounded by the peace and quiet of smalltown country living that was the foundation of Mike’s childhood as well as my own. Even though in the photo below it looks like he’s taking out his frustrations with advancing age on an innocent chocolate cake, he has no qualms about turning 36, and even invites 37 to do its worst.

There are two things that are interesting about the video at the end here. One, my daughter loves to dance, yet panicked the night of her dance recital and completely refused to get into costume, despite endless high-pitched pleas from her fellow ballerina friends. The dance recital was held the night before we left for Keuka Lake.

Secondly, Anna refused to swim in her pool while on vacation because she didn’t like to see a single speck of leaf, bug guts, or twig floating in her pool. However, she readily swam in the lake every morning, a layer of bio-flotsam always circling. Even a three-foot dead fish was washed up one night. But slimy dead fish with their gaping mouths and wide lifeless eyes didn’t deter Anna. So here’s her debut water ballet performance. Probably not quite what Esther Williams had in mind. 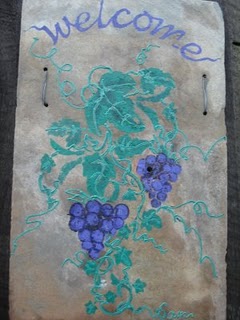 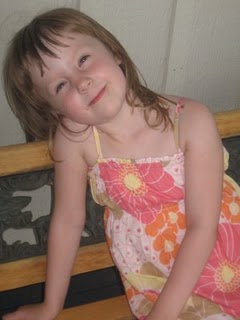 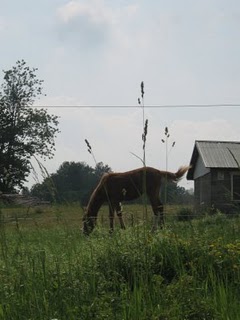 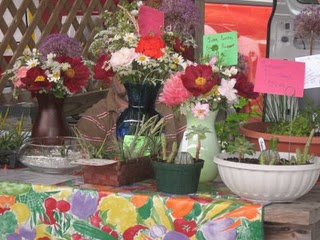 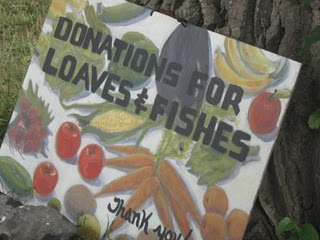 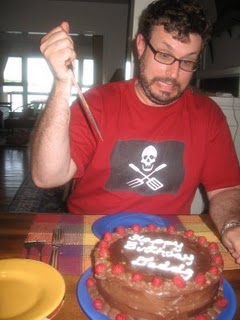 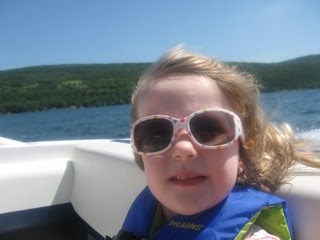 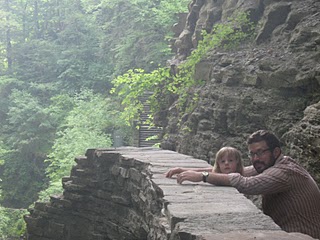 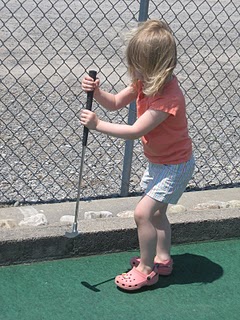 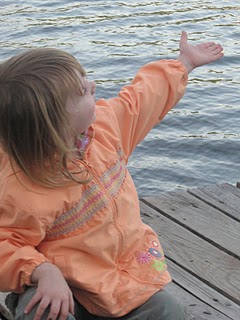 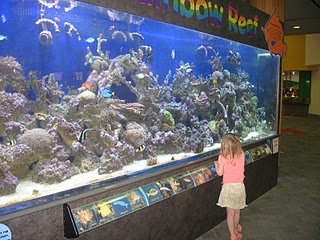 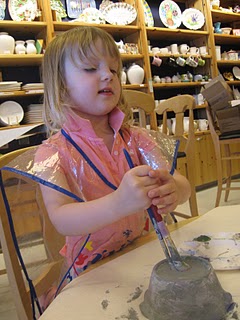 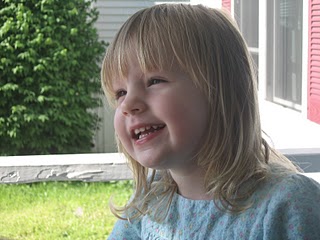 Maybe it’s because I grew up in the region, but I assumed people knew “The Fingerlakes” the way people knew the Great Lakes. 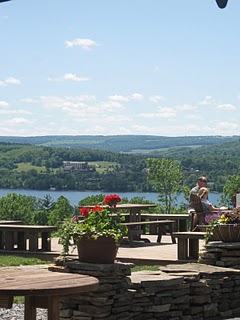 Today, I was proven wrong–repeatedly. We came home last night after a picture postcard, sunny, blue-sky week on Keuka Lake, and during the 24 hours since our return I have discovered that no one in greater metropolitan New York City knows where or what the Fingerlakes are. Here are some friends’ responses after telling them where we had gone: “Oh, we love going to the Catskills, too” or my favorite, “I love the Adirondacks.” Here’s a quick and shallow tutorial on the geography of New York State. Voila.

Unbeknownst to many, central upstate New York is home to endless lush vineyards that produce some pretty awesome rieslings and other whites (reds not so much), and, I learned while in Washington State wine country many moons ago, is also the third largest wine-producing region in the nation (Napa Valley and Columbia Valley in western Washington State are first and second, respectively). 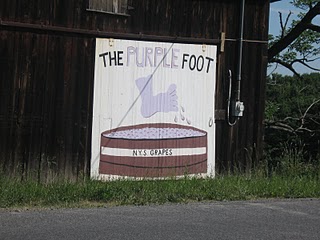 On Day One of vacation, the family hit the wine trail, which happened to also feature tasty barbecue. I’m no enophile, but I like what I like, and I liked meandering from one bucolic winery to another doing nothing but eatin’ and sippin’ for an afternoon–a fine way to kick off a vacation. Anna joined her parents on the wine trail and was a real trooper about it. She never complained about being bored, though my guess was that by Winery Number Three she wondered when the barbecue-wine-trail would end. She occupied her budding little mind by picking every dandelion within sight. Any sort of yellow spot on a field of green was quickly yanked by eager pink fingers. I’m thinking of sending the wineries invoices for weeding services. When there were no dandelions from the earth to be plucked, Anna simply took in the scenery. 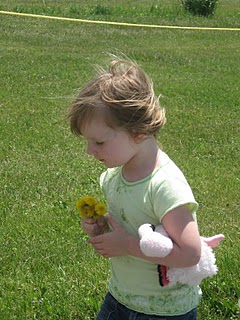 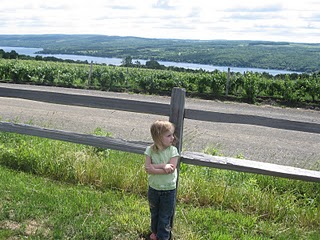 Scenery included large barrels spaced out across fields like grazing cows. Anna was convinced they were filled with chocolate milk. 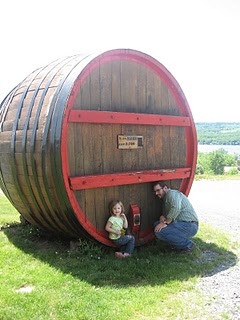 When we weren’t sampling the vintages, we chilled at our little rental on Keuka Lake, which in Iroquois means “canoe landing.” 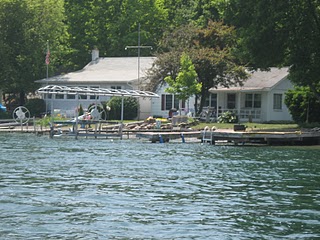 The Iroquois language was obviously formed before power boats because what we experienced at Keuka was the joy of boat landing–namely, taking a boat down the lake to the town of Hammondsport, parking the boat, and walking into this idyllic village and its idyllic tavern where we enjoyed brie and raspberry beer from Belgium. I’ve never boated out for a beer before, and let me tell you, I had been missing out. If you’re ever in Hammondsport, New York, one of the cutest little lakeside towns, filled with colorful picturesque homes that look like rows of pastel dollhouses, check out the local watering hole practically named The Village Tavern, and enjoy some of the 130 beers they have to offer. We did.

And then we boated back. 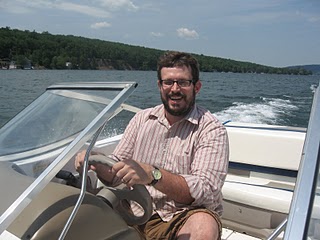 In between beer, boats, and wine, we grabbed some quality time by the wading pool, 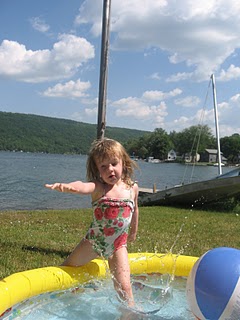 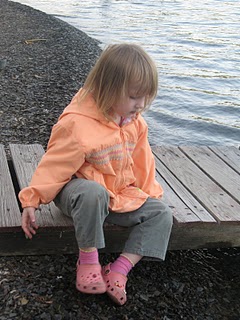 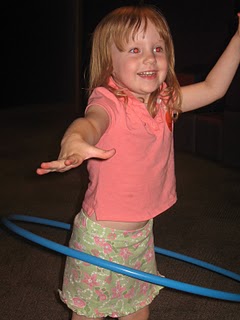 We’ve been doing this summer pilgrimage to the Fingerlakes since Anna was five weeks old and it’s become the quintessential summer family vacation that we begin to look forward to the minute it’s over. I like mixing up these charming, almost retro vacations with the jumps we do to places like Cuba and Jamaica, and in January, Ecuador. When we go the Fingerlakes, we’re completely unplugged and simply connected to whatever we’re doing that moment. These trips never involve Disney characters, schedules, or all-you-can-eat buffets, just us doing what we feel like doing when we feel like doing it. It’s the type of vacation where you don’t come home feeling like you need a vacation to recover from your vacation–and that, dear readers, is what vacation should be. 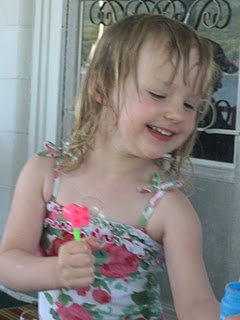