When the Spanish arrived in California centuries ago with their quest for gold and domination, did they look at the arid landscape and the puzzled faces of the American Indian families, and think “And just how do we make THIS work?” After all, no one wants to disappoint a benefactor, especially when it’s a royal family thousands of miles away.

That’s what I was thinking during our visits to five of California’s 21 missions along “El Camino Real”, the “Royal Road” that is Highway 101. Life in any place new is hard, and life in 18th century California was exceptionally hard. How the Spanish made it work is a testament, I believe, to both their resourcefulness and perhaps, somewhat ill-guided sense of confidence. Maybe they approached dry earth and Indians, and thought “This will work!” Another point that kept running through my mind as we walked through mission gardens, museums and graveyards (including the headstone of Fluffy the Cat…no joke), is that these were “church farms,” places dug to produce both food and devotion, and if everyone was going to survive, everyone had to agree to this model. If you were Spanish, it was a much easier choice.

During the construction of the missions, there was rampant infection and disease, food insecurity, drought, and earthquakes, including the December 1812 earthquake that damaged the San Gabriel Mission near Los Angeles, and killed 40 American Indians at the San Juan Capistrano Mission when the new bell tower collapsed. Ghosts are said to roam San Juan Capistrano, one of the more ornate missions we toured, and walking mission grounds, I admit, I felt like I was tip-toeing through other people’s stories, for burials are everywhere. And when there weren’t graves, there were eyes watching from paintings and photos tacked to the walls. 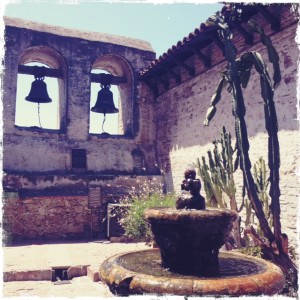 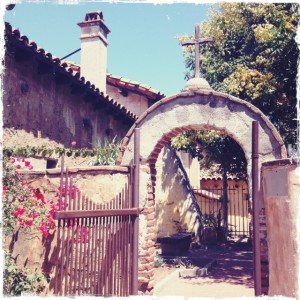 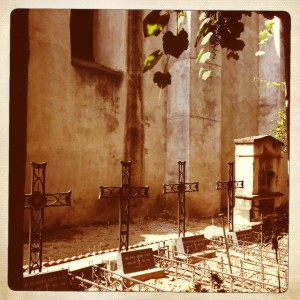 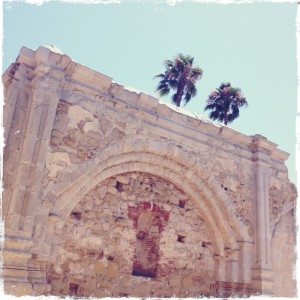 The 21 churches span between San Francisco and San Diego, and are intensely lovely, bittersweet chapters in the history of California and colonialism. Wrought iron bells line Highway 101, a trail that became a road that became a major highway, where people can still find sanctuary and food during their travels through the Golden State’s unforgiving heat and mercurial weather. The five we visited were San Juan Capistrano, San Gabriel, Santa Barbara, Carmel’s Mission, and San Luis Obispo, which is next to my new favorite restaurant, Luna Red (best quinoa salad, EVER!). Santa Barbara, with its coppery blondes and chic boutiques, looks to the hill above where the Santa Barbara Mission, one of the prettiest, sits like an aging, beloved queen. I wrote more about our visit to the Santa Barbara and other missions for CheapOAir. 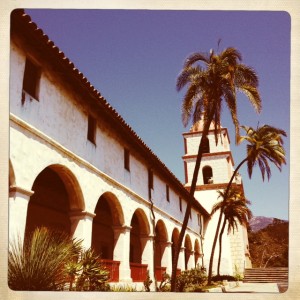 What was most lovely to me was that many missions remain active parishes in their towns; the bells still ring, people still pray, priests still lead. More than 200 years after the first brick was laid, these missions remain a beacon of faith and community. Year after year, the missions host weddings and baptisms, funerals and holiday services, standing beside families through their most significant milestones. As I wandered in and out of the missions’ adobe vestibules, men tanned from California’s relentless sun and sinewy from gardening and taking care of mission grounds, looked like the Indians in some of the old photographs on the walls. They prayed at the altars. They chatted in Spanish while watering plants. Vines were still producing grapes. Orange trees were still flowering. Roses still bloomed. Past was present. The missions’ resilience inspired; for here, in fast-paced Southern California, in 2013, old-fashioned faith and hard work had outlived hardship. 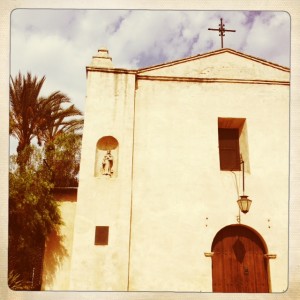 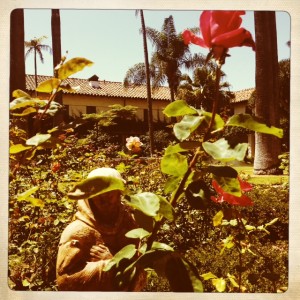 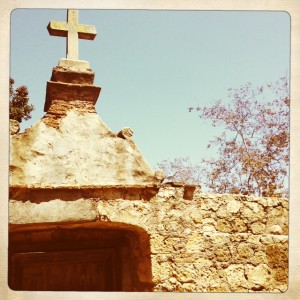 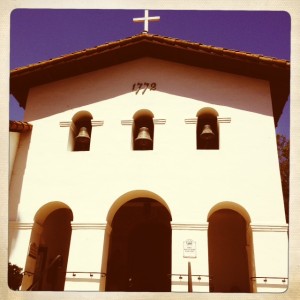